I came across a Olympia Cyrillic typewriter on Gumtree.com.au a little while ago, and had a hell of a time getting the seller to send it to me. In the end, they just disappeared and ceased email contact. About 4 months later I saw them advertise the same machine again on the same site.

Again several emails transpired and again we got nowhere before they stopped talking.

Note: anyone looking to buy this machine on the sunshine coast, I think it's vapor-gear. Don't waste your time with it.

I've been trying to chase a handful of Soviet era artifacts for a while now. Originally I had been just seeking a Russian made telephone. But then I decided that if I were to add one to my phone collection in my cabinet, it would be nice to have some other Russian gear to go along side it.

I wasn't too upset about not getting the Cyrillic machine, as it was a Olympia Traveller - which was too new a design and would have not really reflected the era. And besides, the Travellers have quite a reputation for being a rather shitty typewriting experience.

But then a couple of weeks ago a Cyrillic Hermes 'Baby' with turned up on eBay AU.  I was excited, as it was a 50's era design with the 'wings' style ribbon covers, and looked largely in excellent condition. With one exception - there seemed to be something missing from the top of the typewriter. 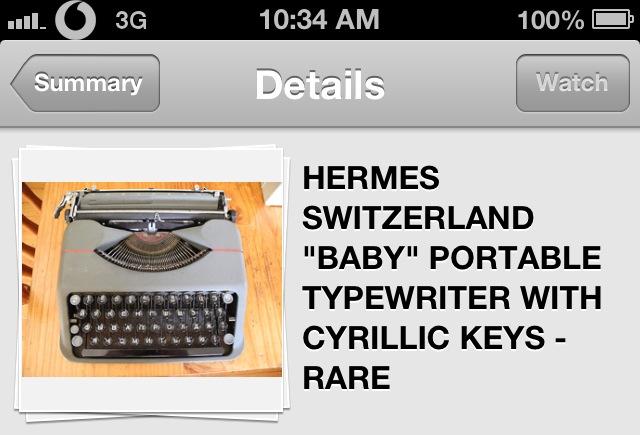 See, it's 'rare'. I know it is rare, because it said so on the internet so it must be true.

It was going cheaply too... No one had placed a bid by the time I saw it, and no one bid against me. Before long, the machine was being shipped up from Tasmania. "Hey! I hope you're up on your Russian!" the seller wrote to me when he notified me that he'd posted the machine.

Now lets be clear... Russian is not the only language the uses the Cyrillic alphabet. It is just the most well known.

By now I'm sure you've noticed what is missing from that typewriter. The Hermes logo, and the 'baby' name.

And being who I am, all kinds of ideas started to race through my head as to why this may be. These were possibly fueled by my love of cold war spy dramas of the Le Carre type, I concocted all kinds of scenarios around this typewriter. Most of which were only heightened when the machine actually arrived. 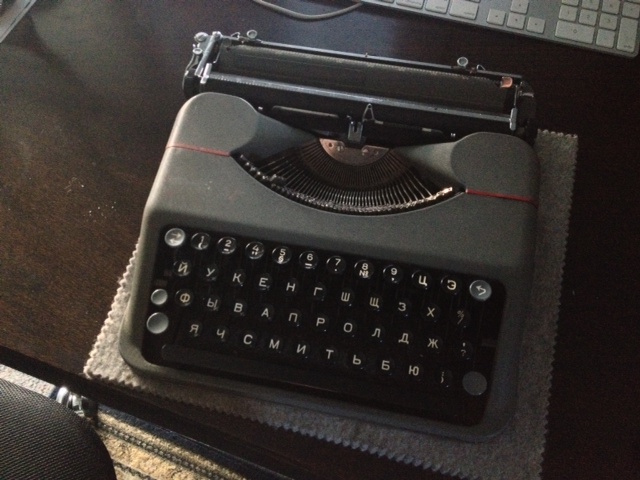 Now, I'm not going to claim for a second that this machine actually had some kind of cold war role. And to be fair, considering Australia's rich and interesting immigration history, post second world war, this machine probably does have a much more interesting story than any dodgy spy drama could ever tell.

But when you see this on the back.... 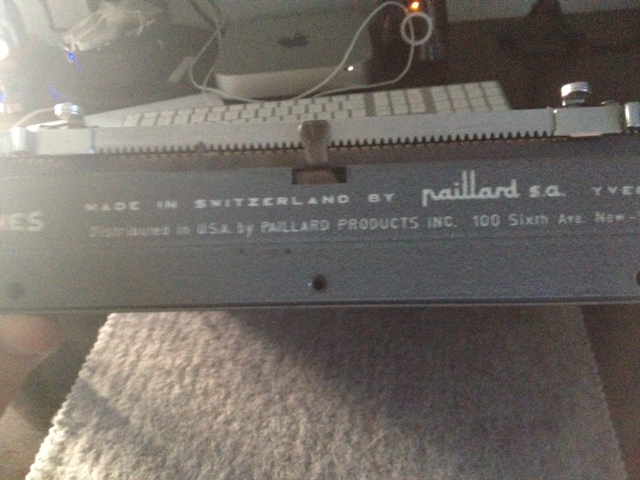 ... it isn't hard to start wondering about this machine. So, it was made in Switzerland and sold to the USA Market. At the time there were Hermes dealerships in AU that were directly importing themselves, so immediately I started wondering about what role this machine had in the USA before it came to Australia.

What DID this typewriter do in the USA before coming to Australia? How did it come to end up in Tasmania? Why was there a screw missing in the back of the machine... was a bug removed?

And then Ryan over at Magic Margin posted a blog about the Soviets spying though the typewriters inside the US Embassy.

I emailed the seller about the history of his machine, and he informed me that he hadn't had it all that long - having bought it at a car boot sale a little while ago. So there was no joy to be had here. It seemed that this machine's story was unlikely to be given up any time soon.

The machine it self works brilliantly. Like all of these machines, the felt seems to hold a substantial amount of musty typewriter stench. It isn't over-powering like one of my other Hermes machines had been, and was just enough to give it that 'history' feel. 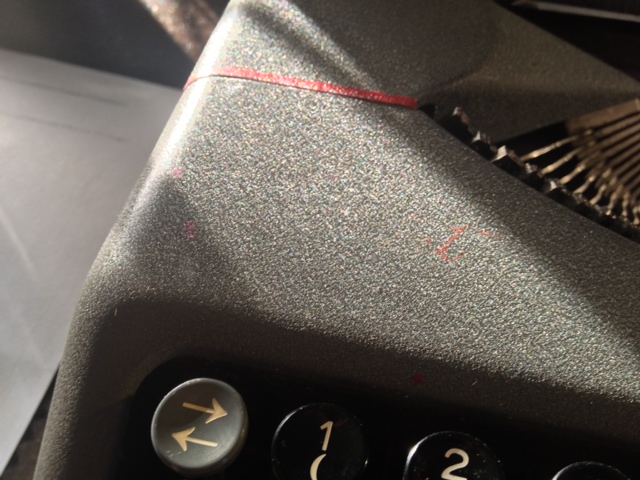 Hang on, I can almost... almost see something there. Is it Something in Russian?!!?

There were fragments of paint on the front that looked like part of the original logo. But I couldn't quite make out what it was. Also, there were two other fragments of paint that looked like it had been pushed around and left by some kind of chemical wash. It might have been a miss-guided attempt at cleaning the machine, but it also could have been an attempt to hide something.

Well... You could get all kinda 'C.S.I.' and whip out your specially made Black-light torch. You know, the kind that every self respecting person has sitting about the home for the thousands of potential uses that a Black-light torch has. 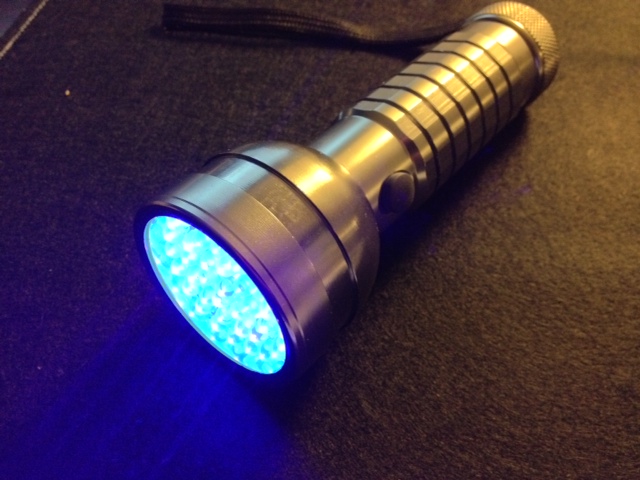 So I grabbed out my handy-dandy Black-light torch, and flashed it onto the Typewriter. You know... Gangnam style. Why not Gangnam? CSI always rock it out to some old crappy pop tune, why not a new crappy one? 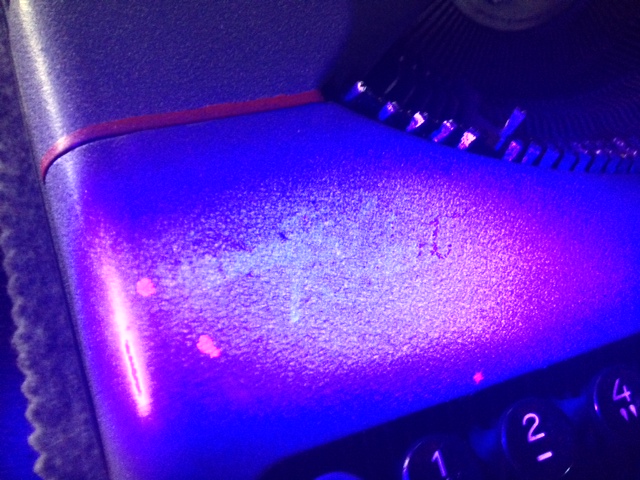 As it turned out, it wasn't even a Hermes Baby. It was a freakin' Hermes Rocket. Hardly some unexpected cold war relic! My understanding is, that the Rocket name was a label that was applied to a series of Baby machines that were specifically made for the US market. This again confirmed that this machine had taken the long way round to Tasmania.

But there was something more... if you look at the photo you can see three pink and glowing fragments of paint. While these were somewhat the same colour as the rest of the red paintwork on the Hermes, under the Black light they glowed with considerably more oomph.

Why did they glow? Well, the glow that you see under a Black-light is caused by phosphors reacting to UV light. It actually produces light when it is hit by the UV rays. Phosphors have been used more recently in modern products to give brighter tones and more defined colours.

It doesn't mean that the paint on this typewriter was younger, but it does indicate it was applied in different conditions in a different process. The fragments themselves were thicker than any of the text, including the bold 'Hermes' logo. So it is again a bit of a mystery as to where it came from, and what it originally may have depicted. I suspect that something had been stamped or painted over the top of Hermes Rocket logo, but unfortunately none of it had bonded enough to stay behind. But would have been this that was washed off when the bulk of the original logo was removed.

Anyway... I'm very happy with this machine. After a little bit of servicing it is writing and running extremely smoothly. What more could I want!

I know what more I could want.... A Russian telephone for my collection. Now.... any of my readers got any Soviet Telephones?