Causality in the best way.

I slipped my glasses on this evening, and then clicked my way into Facebook. It's just one of those things I do a few times a day to feed my addiction to my current casual social contact tool.

There was a short two line message from a friend on there.

A friend of mine, that is part of a small activism group I am part of, received a typed letter from me last friday. I guess she held it off till later in the weekend to read it, and afterwards left a little message to me in reply.

"I was in tears after I read your letter" She wrote. She also spoke about how it reminder her about how her grandfather used to write to her with his typewriter in much the same way. He was a political activist and social-worker in New Zealand.

Every letter I have written so far seems to have had a small but powerful effect. I haven't received many letters in reply, but I have had quite a few social network reply notes and postings.

The art of the letter - in the mail - isn't lost. Even when letters were commonplace they were still powerful things to receive when they were personal. As was highlighted by my friends response.

The letters from their grandfather, written back some time ago were treasured just as much back then. If they weren't, the letter from me wouldn't have had such an impact on her. Emails today don't have the same effect. Email has changed the way that we use writing to communicate, as has SMS pushed that even further.

Email and SMS's easy access has allowed us to communicate faster than ever before. However there is no intimacy in SMS, and Email has become more function than form. The intimacy has fallen from a communication form that has become limited to emails along the lines of "RE: Issue with water-release device" and "Attached: colour swatch ideas for new kitchen paint".

Because of how these Emails have become so... mundane and functional, a written letter can be so much more. Particularly when every day we still receive in the mail that has been created on a computer, with out name and address 'mail merged' in.

Even when the Emails are personal,  there's no surprise, and no passion. And we have largely lost the ability to use this communication to do so. Further more we use Facebook and suchlike pages to compensate. As such we see an almost endless stream of our lives thrown up for all to see. But although our lives have been recorded 'in the moment' and replayed for social value, the connections between the people on these pages are lost as there is little, and token interaction with the audience.

My letter had nothing breathtaking or unexpected in it, but was of me, and about me. And that always seems to matter. 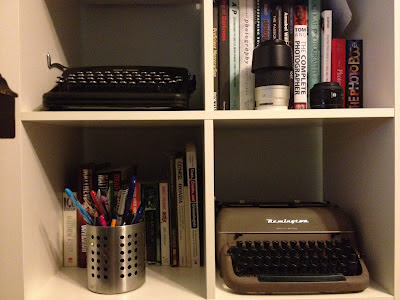 Away for storage till another day.

Now - speaking of filthy platens, I acquired this Royal FP a little while ago dirt cheap on eBay. Unloved amongst the other more collectable friends on the seller's eBay page, it sold to me unchallenged at its minimum price.

The seller naturally had no guarantees that it worked. Actually, I'd dare say - convincingly the seller was too young to have ever actually used a typewriter. I had collected this unit at their home, and it was a shell filled wall to wall with junk.

The items had clearly been bought at several deceased estate or suchlike auctions, and I felt like I was walking into some Oprah Winfrey special on 'Hoarding' when I arrived there. Having just moved house, I felt like I was shifting around an awful lot of junk. But after being at this place, I felt positively functional. I wanted to take a photo, but I felt there were eyes hiding in the mountainous assorted piles of garage sale debris that I felt that such a thing was impossible. 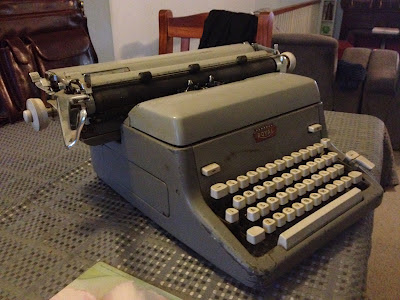 In its 1960's heyday this machine would have been burning up pages of extremely dull documentation. I've heard people describe this machine's colour as 'battleship grey', and to be honest it feels about right for it. I'd seen one of these before on the Strikethu blog (amongst others) and generally they seem to be indestructible.

This machine is a tank. Even more-so than my Quiet-riter. It's clearly had a lot of bangs and scrapes over its lifetime - and there's so much gunk in it that I'm surprised it worked.

But work it did. Sort of. The seller indicated that the keys were stuck. This wasn't the case, but that's alright. With the exception of 1 or two they were perfect. And even then the it only took me a minute or two to get it working.

However, the carriage was not moving. Or at least wasn't till this afternoon when a bit of oiling, forcing and prodding got it to sort of start moving. Before long the whole thing started to show serious promise that it might start operating. By this stage I had stripped off a large amount of the outer shell - in order to start on part 2 of the project.

Anyway, I really want to get this typewriter working. I've been developing a story for about a year now that has been set in the 70's, and I like the idea of playing the narrator telling the story on a machine what would have been seen thumping out reports in some dark an sordid office somewhere. 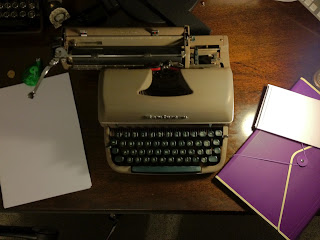 I spent the evening with getting close and personal to my Remington Quiet-riter, some paper scored from the recycling bin at work, and some pre-stamped envelopes.

I'd bought this typewriter just before I moved house, and I hadn't had any time so far to spend some quality time with it.

When I first got it, it felt stiff and unwieldily. A morning spent with a scrubbing brush to clean up the shell, and a few dabs of oil and this beastly typewriter from the 1950's came alive.

I showed a photo to a friend of mine at work, and her response was 'Ugh! It looks mean. If it could talk I'm sure it'd growl'.

Anyway, I really just wanted to write. So I did. I dropped the typewriter on the back deck of the house, and listened to the trains in the distance while I tapped out a letter to my 1 year old Nephew.

Sure, he can't read, but that's not the point. It's really a latter to his family, about his family. It's short, brief and a little hello from the clan. And I hope my sister isn't too upset by it! I can only wait and see I guess. 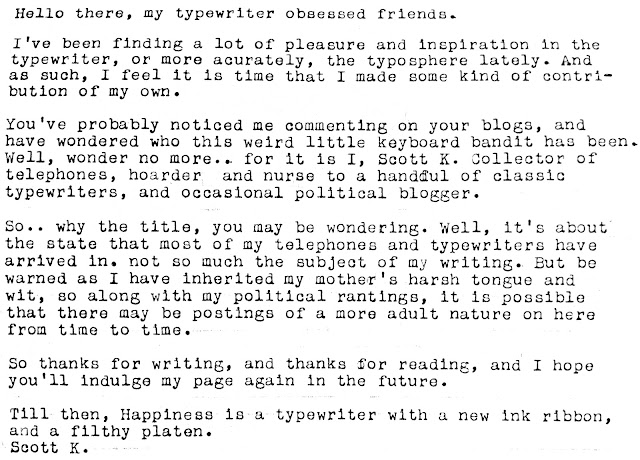 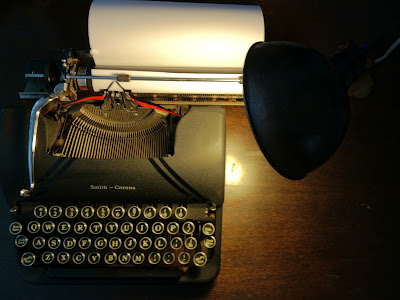 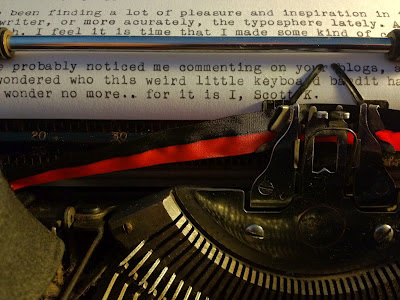