I didn't need yet another typewriter. I really, really didn't. I was just thinking to myself last night about how buying that Remington Noiseless the other week was a completely frivolous purchase that turned me from enthusiast to collector.... And then I looked at ebay.

I spotted an old Royal portable a week ago. It was located about 30 minutes up the highway from my place, and it had those nice, nice glassish keys that Royal produced before moving to the 'finger tip shape' AKA 'tombstone keys'.

Okay. It was a model that I thought I'd like to own. So I slapped down a token amount.

About an hour before bidding ended, I noticed that the bidding was almost up to my final bid price. So I had a look at the person I was bidding against. 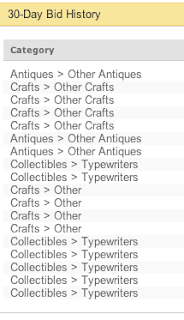 Ahhh crap. I know where this is going.

What was in the description?

The typewriter was even co-listed in the Jewellery section.

I think the dolphins were supposed to represent Coloundra, a shire on the Sunshine Coast.

I felt compelled to bid. Instead of just letting it go to the keeper, I actively pursued it. I started to use aggressive tactics to get the typewriter. And in the end... I got it.

I have no idea about the state that it is in, or even how well it works. I just... couldn't find myself just letting it go; to be chopped. I'm sure I paid too much, and I'm sure I won't do this again. I promise....

I don't need it, I'm not even sure I know what to do with it. I already have enough projects. Oh well..... At least it's for charity. It is, right? Typosphere... you'd do the same, wouldn't you?

Uuuurg. There's gonna be a hangover. 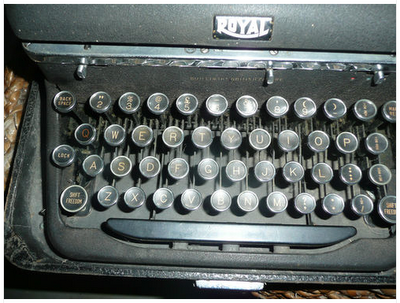 Even most of the pictures just focused on the keys.....