Okay... So... following the Hermes 3000 that I was so excited about a couple of weeks ago, I purchased another 70's era Hermes 3000 for a whopping - bank breaking $9.50. Which officially makes it 50 cents cheaper than my previous cheapest typewriter acquisition from ebay. 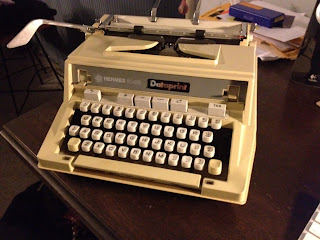 Australian 50c coin - featuring our coat of arms.
AKA: The big coin that busts up your wallet.

Again, I really didn't need another typewriter, but as I couldn't see myself using a QWERTZ keyboard regularly - and as I was so impressed with the feel of the previous unit, I felt a QWERTY unit would be... nice to have. And at $9.50 - why not.

But typewriter geeks... That's where the logic of this story ends.

May I present to you - The hungarian made Hermes 3000.

Where as the previous unit didn't label it's origin, this one sure does. While the serial number is only 200,000 units different, the quality of this typer feels quite varied.

But firstly - let's talk about what the seller described as a "perfect" typer. Hit the shift key and the basket locks down. Gummed up? Probably. The ribbon is drier than sandpaper, which is roughly the same way I would describe the texture of the platen.

But it types. Or at least will once I shuffle in a new ribbon... and crank the shift key by hand.

Having said that, I feel that every time I type - the family of dust-bunnies that are living inside this unit are being tormented by the hammering sound of the keys slapping the near rock-hard platen. It must be tough for them. I bet they have nightmares about someone writing poetry as they sleep at night.

There's the obligatory sticky key... D to be exact, but I get the feeling others are close to being home stuck bodies too. Which brings me to the next point - The sharp and accurate magic of the key presses of the other unit, just... well.. don't seem to be here with this one. I don't feel that tiny ratcheting so much, or the same quick movement that my other unit has. Some of the keys are perfect in action still, and do have the quite same feel. So I'm guessing that the problem could be dust and gunk in the segment.

It's not that it is bad. I just feels a bit more.... average. The 'force' is not strong with this one. Must have less midi-chlorians.
WARNING: Midi-chlorians are copyright Lucasfilm 1999. And are also known as 'The all time worst superfluous plot point in cinema history'.

The plastic itself is quite sun affected, and as such has become something akin to that 80's era computer beige.

Further more - the smooth and silent operation of the carriage on the QWERTZ unit, isn't quite so silent on this one; it ratchets - although somewhat quietly - when shifted.

I can't help but feel that this machine wasn't made to quite the same quality standards as the other unit I purchased. It sure hasn't been looked after as well. And it even has the 'Dataprint' sticker on it from the store that sold it here in Australia. So this doesn't even have an interesting story behind it.

Although... what's this on the side? 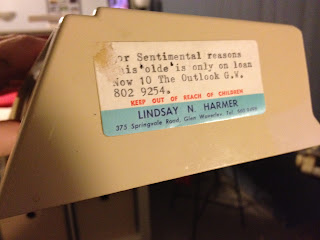 Another address label! This time, it is clearly a pharmacy label. These H3K owners seemed to really love labelling their typewriters.

The label on this occasion has two addresses. One for the pharmacy business that the label came from, there other for - what I suspect is the owner's address. The Owner's house also appears to be currently for sale.  Or was that the address that the typewriter was loaned to?

The city that this address is located in, although it isn't specified on the label - is Melbourne, my old home (and honestly quite missed) town. The Pharmacy is no longer there. It has been bulldozed to make way for a toyota dealership.

Looking at the label, the phone number listed on it is pre-early 1990's when Australian phone numbers changed from a 7 digit number, to an 8.

Oh well, I hate to say it... but this typewriter is destined to become a project writer of my own. It'll be interesting to see what I can do with the plastic shell of this unit, and I'm looking forward to having a bit of fun with it. Certainly the other problems are potentially resolvable, so I'll keep you up to date with what I manage to achieve with this - $9.50 typer. Clearly I won't be able to turn this unit into a 'Silver surfer'