For the beauty of the stars

While I was out west at Charleville, I had originally planned to do some night photography. I love photographing at night, as it feels so peaceful and requires patience. A 15 minute exposure seems like a lifetime while you're waiting for it, but I guess in a lot of ways, it is everything that people that love fishing love - a whole lot of doing nothing, in the hope you will get a great end result.

Anyway, after I arrived in Charleville on the first night and I had attempted to bash out a typecast, I still had that 'very awake - very tired' feeling going on. My brain was mush, but it didn't stop me from  foolishly grabbing my camera to head out and find a spot away from the town to try and do some photos with ambient/natural light.

I only got one shot off before my mushed brain turned against me! 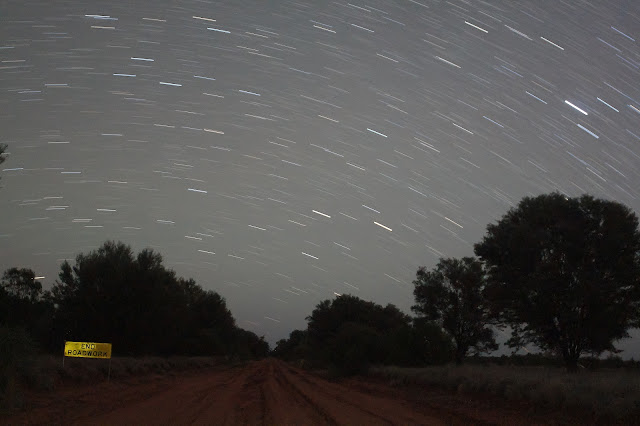 The settings were all wrong. The image came out overly bright in the sky and noisy. It was a poor attempt.

But that wasn't the only thing that went wrong. The loving peacefulness during the taking of shots like these was interrupted by my frantically misfiring brain that was still buzzing away with the trauma of my 2+ hour game of 'dodge the Roo'. A few minutes in the calm and quiet, I started to have a little waking nightmare. I started to think about ghostly bushmen coming out from between the trees. I felt my heart start to race, and then I thought about my camera.

I was certain. absolutely certain that the photo would come out with a ghostly apparition walking down the road towards the camera. I started to think about how I would absolutely flip out when it happened, and that I could never sleep again having captured such a ghostly image.

The shutter clicked. It was only an 8 minute exposure. I pulled the legs of the tripod together and then quickly placed the camera and tripod as one unit into the passenger side footwell of my car. Within seconds I had spun around and bolted down the road back towards my hotel room.

With long exposures, my camera has a processing phase that takes about the same time as it took to expose the shot. As such, I left the camera doing its thing while resting against the passenger seat next to me. I was in fear that any second now the processed image would pop up, and I would look down and be scared out of my wits.

I pulled into the hotel car park just as the camera's back screen lit up with the final image. I didn't even look. I just parked my car and grabbed my camera and went inside.

I turned all the lights on and sat on the bed. I clicked my DSLR into review mode and looked at the photo.

No ghost. Just a bucket load of noise, and an over exposed sky. The 'end roadwork' sign was partially lit by the headlights of a car that had briefly been on the road over a Kilometre back, which gave the sign a slightly ghostly appearance of its own.

Click the image above to have a better look.

As much as the first night was a disaster, I attempted doing some night photography again on another night. I really wanted to do the town, but the redneck mine workers seemed to be trawling the streets in their utes looking for an open bottleshop or pub - or maybe just something to do. So I didn't feel safe enough to do it till really early in the morning - which eventually just didn't happen.

So I headed out of the town again to give the stars another try.

Once again the first shot was a bit of a disaster. 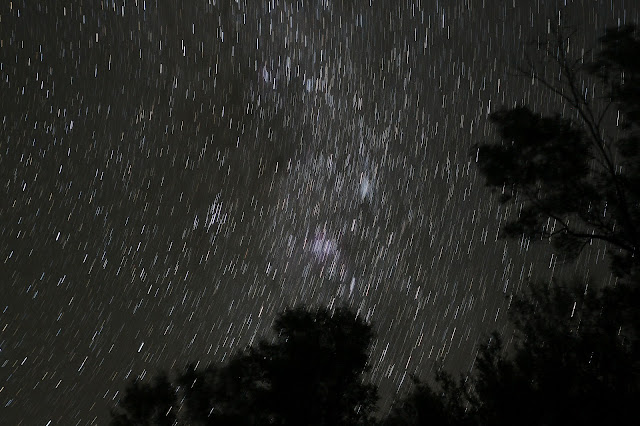 The view here was amazing. The stars were so bright and plentiful that I found myself staring at them in wonder, the same way as I did as a kid.

But I tried to line up a shot of the milky way, only to find myself having to move the camera when a Roo came out of nowhere and nearly knocked it over. For future reference, put your camera in the middle of a clear area so both you and the roo can see what's coming/there first.

I've kept this shot, because even in the finer details... (click to enlarge again) you can see how many stars were so easily visible. This was an attempt at framing the milky away against some trees, but it all ended up a bit of a blur because of the sudden need to snatch the camera while it was still exposing.

I lined up the camera along the road, and tried again.... 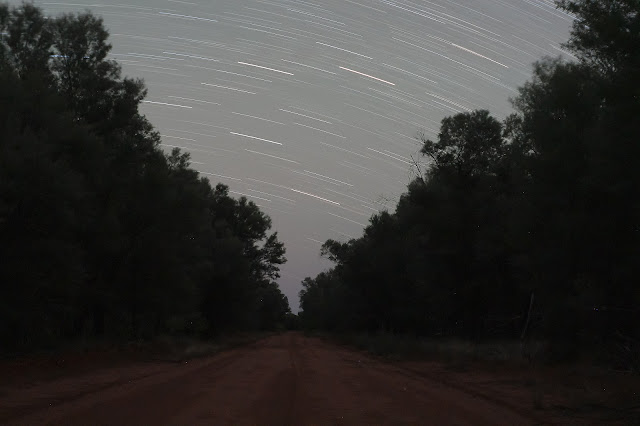 When I saw the road light up in this shot, despite the fact that I couldn't see a thing of it in the dark, I got excited. This image was very sharp and eire in it's own right. The number of stars visible made the sky almost a blur of grey, to the point that looked like it was overcast and filled with shooting stars. But it just was a black sky that was so thick with pinpoints of stars, that it exposed very brightly. It had never occurred to me to adjust the aperture to possibly fade some out, and just take longer shots. 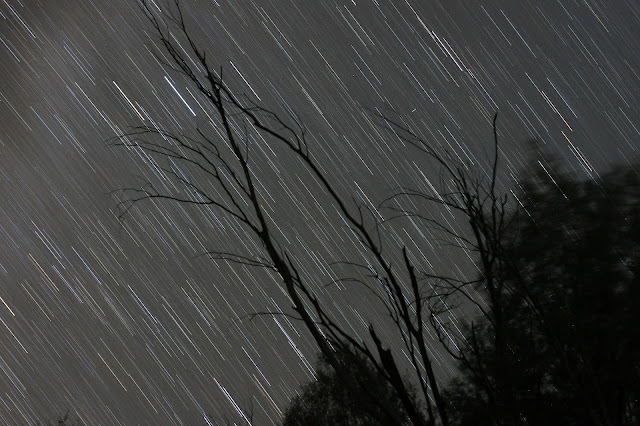 I changed lenses to capture a more intimate shot of a dying tree. The leaves continued to blow in the wind while the dead branches remained still. On my 24" 1:1 monitor - at full screen this shot looks spectacular.

I tried a couple of other experiments before packing it up for the night. Most of those aren't worth showing here, and I started to get a little cold (it was 2 degrees C : 34.5F) and I needed a good sleep.

The one big disappointment, was that I had taken my Medium format (film) camera with me for the specific purpose of capturing these kinds of shots. It is far superior at night photography, and I had intended to run the two cameras at the same time but unfortunately couldn't. There was a problem with the rotating bracket on my RB67, and it wouldn't allow me to activate the shutter. I attempted some hotel room repair, but I unfortunately had left my spare back in Brisbane. I've never had an issue with this part before, and I was kinda taken by surprise. I expected to have bigger issues with the film back, and initially thought that part was the fault.

For those who have never used a medium format camera, the 'film back' is a canister that you can load your film into, and it clips tightly onto the back of the camera. This allows you to change film half way through a shoot, without compromising the reel - allowing you to use things like polaroid backs to check your composition, or other films for other effects. A lot of these cameras are still in use because you can get digital camera backs to put onto them.

I've always loved looking at the stars. The the longer I look, the more I am humbled at how I am just a tiny speck of dust in the grand scheme of the universe. But, paradoxically being able to reason this with myself, makes me so very significant in the universe.

Coming up: Charleville Museum, and that typewriter discovery.