Typing in the museum. Let them free! 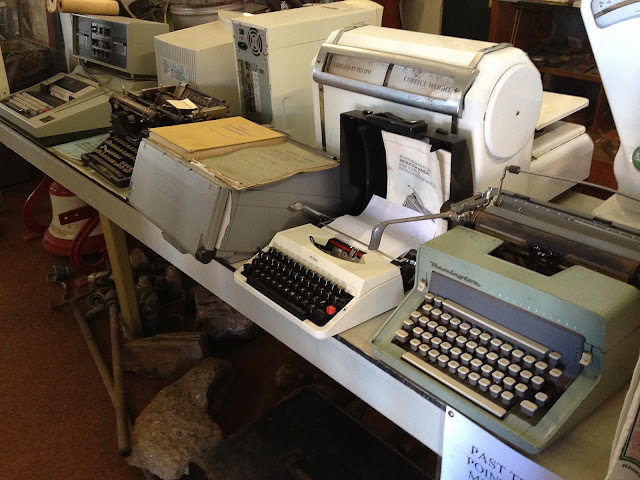 Walking into the Charleville museum I was confronted by what I thought was an odd collection of typewriters. There was almost no information on each item, and they seemed to be just thrown into place as though they were set up for some ad-hoc type-in for really, really thin people that didn't need elbow room.

However the ribbons were all dry, and the machines were in such an awful state that I almost felt compelled to grab my tool kit out of the back of Ruby, and start getting these machines back into some kind of working condition. Although, I also wished I could free them from their slumber, and get them back into use.

The museum itself was a miasma of disorganisation. The displays seemed to be organised, no, mostly thrown together with similar birds of a feather - as though it were more of an antique shop that was being run by some shuffling - half blind retiree.

But it's not a shop. It's a museum run by a shuffling - half blind retiree, along with a group of community volunteers.

One of those volunteers was present at the time, and he seemed to be just walking around in his high-vis shirt keeping an eye on me while I poked and prodded my way through the unprotected displays that were defended by the occasional 'do not touch' sign. He had a shifter-wrench in his hand, and looked very serious.

Some items were kept safely in cabinets, but for a large part most of the pieces were just strewn about on tables or thrown into deteriorating cupboards. 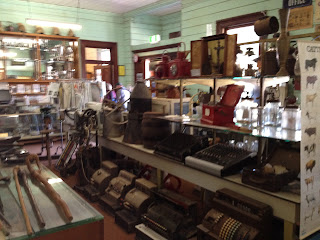 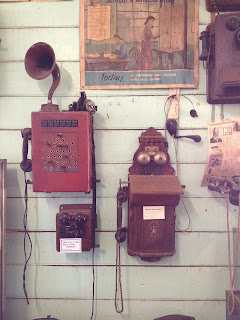 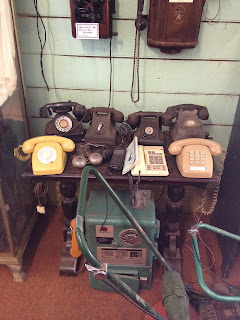 Yeah.... Don't let the lawn-mowers get in the way of your telephones....

So.... By now you're thinking - 4 crappy broken down typewriters and a computery-typerwritery thing? Is that all? Well.... no! Read on my friends, read on. 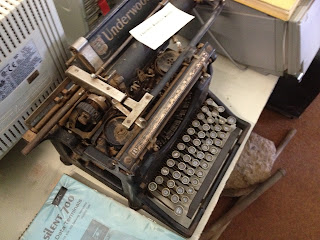 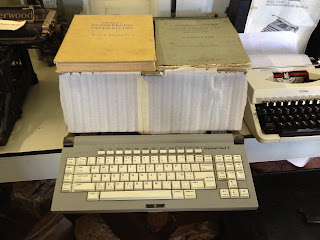 I didn't dare peel back the delicate priceless foam, while a guy holding a shifter stood near by.

Grammar correcting typewriter you say? THAT'S what I need!

Yes, everything was piled onto everything else, and it was difficult to see some of the most interesting items. I eventually went and asked the guy that was running the place if he minded if I moved bits and pieces here and there so I could have a look at some items.

He mostly obliged, but asked me not to touch certain things. One of the odd things were the 'Delicate wax cylinders' (old recordings). 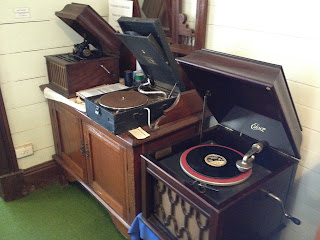 When I informed him that I actually had some of my own and I was unlikely to touch them anyway, he just looked at me nervously. However he offered to play one for me if I'd so like.

I declined, and continued to sticky-beak my way through the dozen rooms - including a bedroom with some amazing 1920's women's fashion on a few mannequins, and a period piece bed. The dining room (this building was the original bank, and held the council chambers) was crammed but spectacular, while the stables (filled with old carts) and garage were fascinating. Especially the rail - ambulance.

(I.O.U. 1 Rail Ambulance photo
When I find where I put it)

I persevered with digging through the displays, and I have to say it was very rewarding. In the process of doing so I found a couple of very significant typewriters - in some unexpected corners of the museum.

Firstly, I have to refer to the Typosphere on what this is: 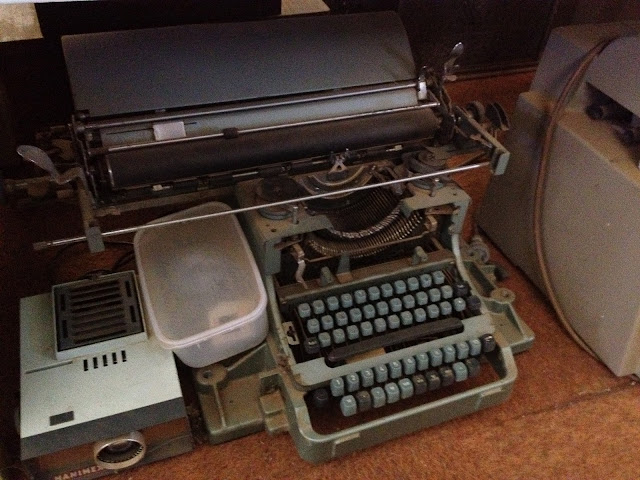 Exhibit A: Honestly, I have no idea.... But it looks cool!

At this point it may be courteous for me to tell you all about the second typewriter I found buried in an odd corner, but I'm sorry to break it to you, you'll have to wait for my next post. While the machine itself isn't really that unusual, it is the original user that makes the machine so interesting. It's the sort of thing that would be right up Rob Messenger's ally.

So I continued to fossick and dig through most of the rooms, finding all kinds of wonderful and weird items. I thought I had explored through almost every room, when I discovered yet another room of disorganised artefacts. I had previously avoided this room, because from the doorway it appeared to be just filled with old saws and degraded farm material. 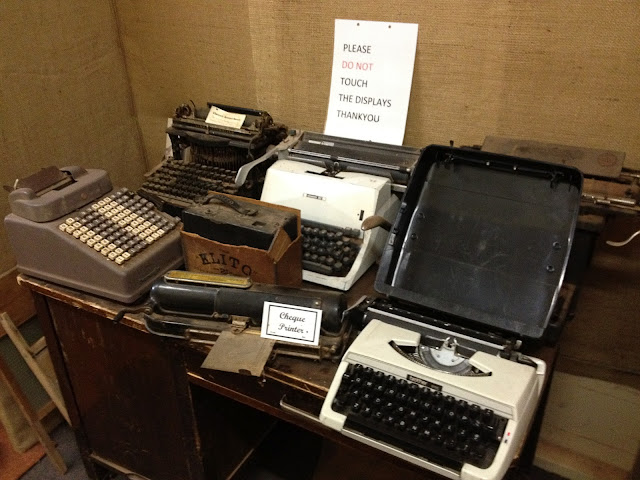 Crammed into the furthest corner of the main building, was a collection of old typers that had been crammed onto a desk, and shoved into a tiny booth that was surrounded by walls made from wool bale mesh.... Because that's how this museum rolls.

This arehad a pretty specific 'do not touch' sign, with the 'DO NOT' written in red. So, while I was in the room that was too far for the shuffling blind man to walk to, and mr Spanner-fixer in the high-vis shirt had disappeared, I naturally felt that this was an appropriate time to stick my fingers onto as many keys and levers as I could.

After all, you don't find a linotype setup every day.... 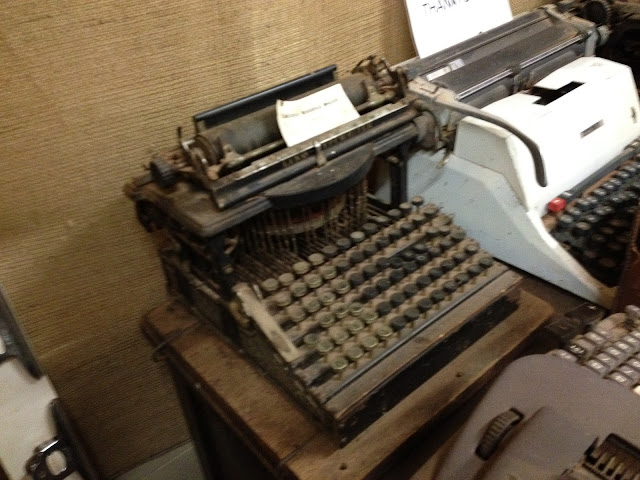 And can I just say... it is the first upstrike typewriter I have ever typed on.

So... Well yes... I'll just shut up for a moment and shove some more photos onto this page. 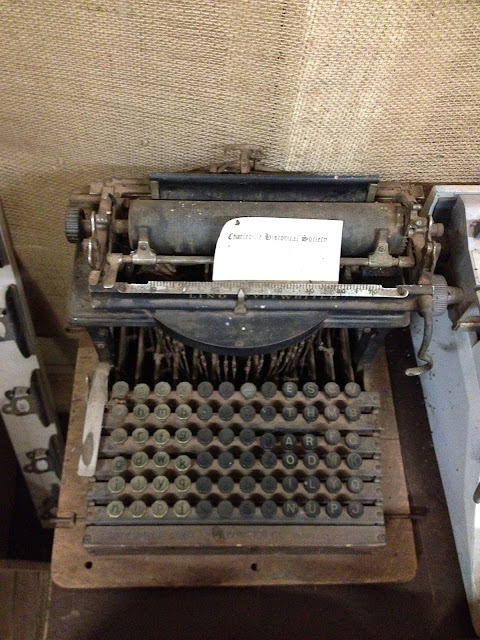 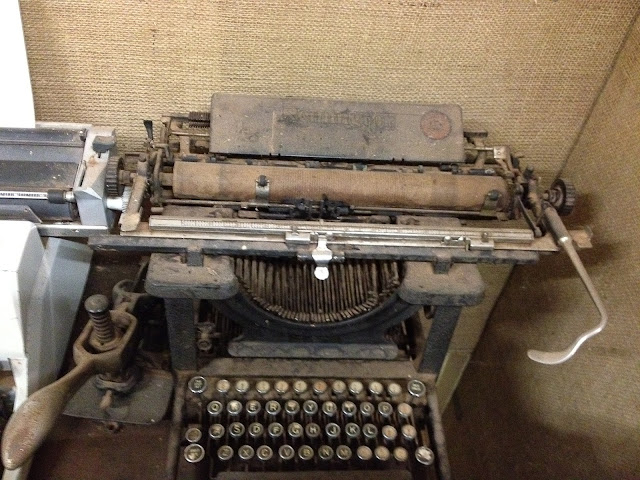 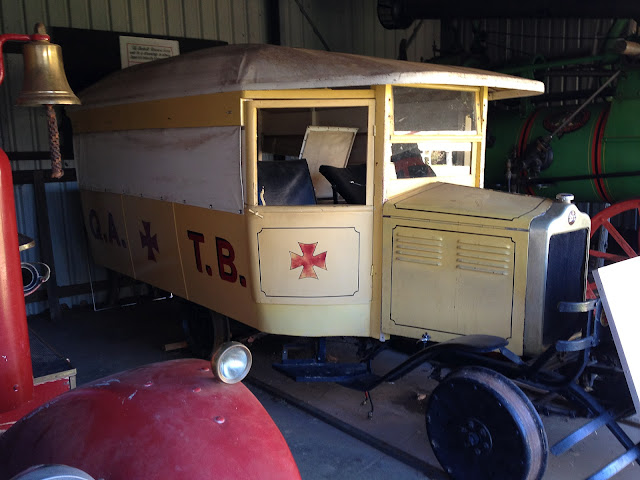 Anyway, I've got quite a lot of photos from this museum. However I'm not going to turn this blog into 'Uncle Arthur's Slideshow night'. I'm saving a few for the next post naturally, but for now I think I've bored you enough for the time being - with the photos that were taking from my iPhone. And if Adowa  swings by, I even have a shot of some interesting antique sewing machines.

So I hope you enjoyed this typewriter lover's casual trip around the Charleville museum...

Oh, and here's a quick snap of was the museum looked like from outside. 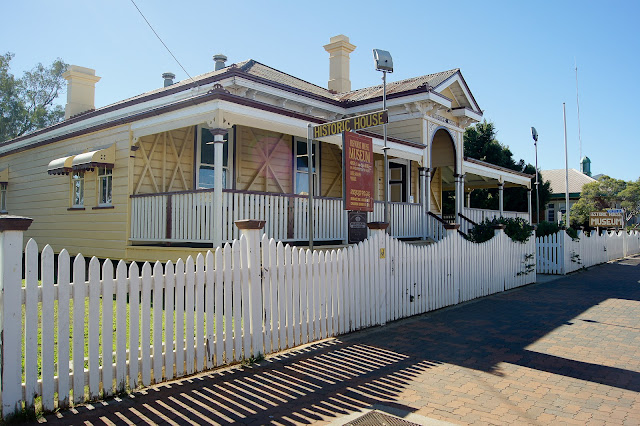 Coming up: The typewriter of the outback.....