It is true. I am an over-thinker. I over think my breakfast, I over think my method for getting to work (I have three easy options to pick from every day after all) and I over think plots for stories till it gets to the point that I can't find myself out of my mental miasma to get the work down on paper.

And..... I over think my typewriter repairs. Constructing new parts via 3D printers, re-shaping rubber in boiling water and baking washed typewriters in an oven? I certainly can't be accused of not being lateral enough with my problem solving.

Oh, how egotistical do I sound...


Anyway... I've been over-thinking stuff again. In this case it was a problem that doesn't even exist. I've been thinking about typewriter lubrication.

I've been using sewing machine oil for a while now, and I've been mostly quite happy with the results. But when I bought that meticulously maintained Hermes 3000 QWERTZ machine I discovered something that started me thinking a bit more about what kind of lubricants I use.

The machine was nearly 40 years old, yet it felt new. The carriage on this machine felt like no other machine I have - including my other H3K machines. Whenever I pushed down the carriage release, it traveled so smoothly that it felt like it was gliding on a cloud.

On closer inspection I could see little trails of a very fine yellow grease. On the end of the carriage rail I could see a small dollop of the grease had gathered there.

The H3K had been kept by a very meticulous owner who had barely used it since its last service in the 90's. It had been kept in its cocoon of a case, which allowed me to mull over with near forensic attention to detail, the service of this machine that had been conducted in an era when they were still maintained by talented mechanics.

Part two of this tale takes part about 2 years ago, in a motorcycle workshop.

I needed to get my motorcycle's chain changed some time back, and when my bike (nicknamed Roxanne) rolled out of the workshop with its new chain, I noticed something unusual about it. The chain was coated in a white waxy substance. With a bit of investigation, I discovered that this was a  compound that was produced by dupont, and it used Teflon as its lubricant base. The great advantage with it was that it was 'dry', and it didn't gather dirt into oily cakes.

This stuff is really hard to find in Australia, and is extraordinarily expensive here.

So I went looking for alternatives last week, when I came across another series of Teflon based lubricants that caught my attention. Not so much for my motorcycle - but because I had been looking for a grease type of product that could have been used on my typing machines. 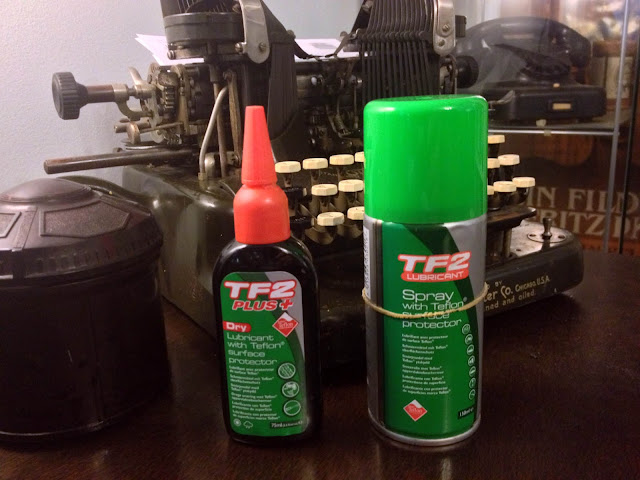 The stuff is called TF2, and it comes in a variety of versions. What originally caught my eye was a grease produc, that came with a small grease gun that would have been perfect for applying the compound into tracks on my typers.

But it was a different product that got my interest in the end. It was substance called TF2 Plus - Dry.

Don't let the name fool you - it isn't like graphite powder. The dry is actually a liquid while it is in the bottle.

This is a product that was designed for use on bicycle gear systems, chains and derailleurs. It is made so that it attracts a minimum of dirt, and protects the metal surfaces from wear by using Teflon. I looked at the data on this stuff, and the more I read about it, the more I liked it.

So... I grabbed a bottle of it, and a can of the spray lubricant (which isn't a 'dry' product) to give it a go.

It is more expensive than graphite or Sewing machine oil, but I was hoping the benefits would out weight the relatively higher cost. The bottle was a whopping $9 after all. My theory is that it would be an excellent middle ground between Oil and powder, that could be used in a variety of ways.

It was probably a silly idea, but I decided that I would experiment on my Oliver 5 machine first. And can I say... I don't regret it for a second - yet. I tried using it with the plastic nozzle at initially, but this proved to be a disaster as the oil flowed out of this far too freely and abundantly. As such I returned to the medical syringes that I have used with my sewing machine oil. 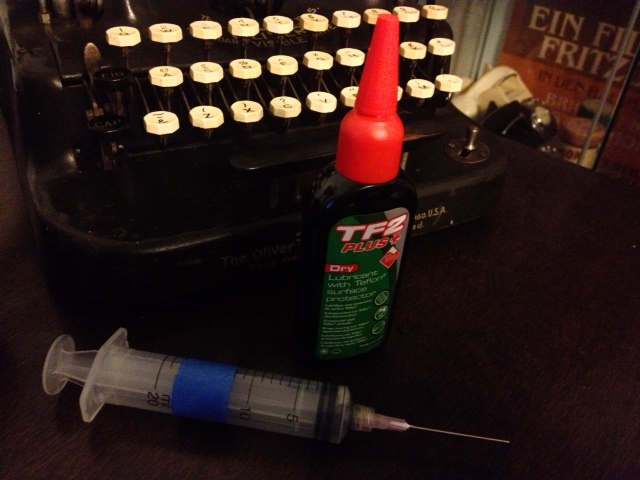 This is where I noticed the first and most immediate difference. Using an 18g 'drawing up' blunt needle, I often struggle to draw the sewing machine oil up into a syringe. But this time the lubricant drew up almost like it was made from water. It was obvious that the viscosity of this was much finer then sewing machine oil.

I strategically deposited the TF2 onto the carriage rail of the Oliver, and onto the bearings - and I worked it on or spread it over with a wipe of my finger. As expected the compound dried into a slippery wax quite quickly.  I slid the carriage back on, and everything seemed to work fine.

Great, I thought! Now... lets try some finer work. I used the syringe to shoot some oil into some areas that seemed to have been quite gummed before, and still felt a bit... awkward. I dropped a small amount into the metal at the joins, and quickly found the lubricant drawing across and into the gaps of the metal. I had never observed the sewing machine oil do this.

I spun parts, pushed bits around to work the oil in, and I was astonished with the results. The Oliver practically flys now. Before it felt old and stiff... but now everything seems to just glide brilliantly as though it were near new. I had attempted to achieve this with sewing machine oil, but clearly the lighter viscosity of this stuff nailed it. I distributed about 1ml in total with the syringe, which worked fantastically.

In trying to use the nozzle at first, I spilled a bit onto some of the paint of the Oliver. Instead of just washing it off, I've actually spread it about on the surface. It dried clear, and feels like a fine and slippery wax to touch. But I'm more interested in seeing how much dust it collects while the typewriter sits on my desk. The paint hasn't been harmed by it, which was quite a relief. After some the the dust has settled, I'll see if it blasts off easily with a bit of air. This will give me an idea as to how it bonds to dust, and what the likely outcome is going to be while using it.

Anyone that has tried to un-gum a machine that has been filled with oil in the segment, will know exactly why this is important.

As such, I think - long term this potentially could very well be used in those times that you absolutely have to get some lubricant into the type bar bearings. I'm not willing to try it yet, until I've seen how well it deals with dust. But I have a candidate lined up ready for experimentation.

I bought the TF2 spray, but I haven't really used it yet. I thought I would experiment with it, as a substitute for the kind of people that feel compelled to drench their typewriters in that evil WD40 shyte. I'm not a drencher, but I felt like giving this a bit of a test run. However, so far I've been too impressed with the application of the TF2 dry to bother.

On preliminary observation, I highly recommend this for use. I've also used it on the rails of my Adler tipper, and found that it improved the feel of the movement dramatically.

I'll give an update on my results when the data is in. 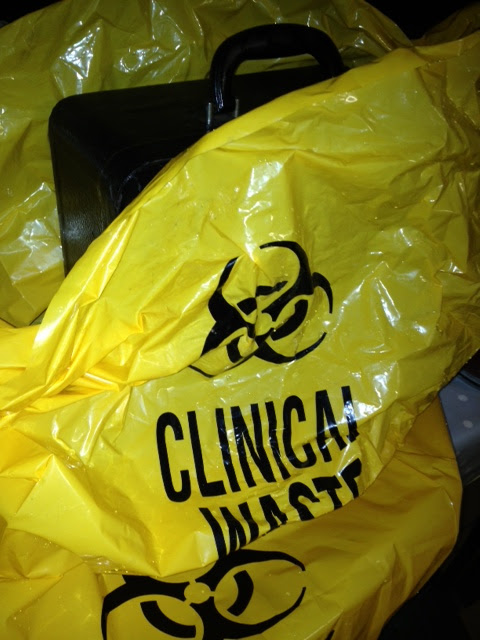 Another Royal... and a story to be told.