Singapore, you've been good to me.

Typewriters have been running hot lately almost everywhere but on my own desk. NaNoWriMo has seen the Typosphere reduced to a skeleton crew, while the ICI has been chugging on.

Even my own computer keyboard at home has been feeling largely rejected of late.

It's not that I've lately lost the passion for writing, typing and just generally blathering. But rather I have had a distinct lack of time and energy to be able to just simply - enjoy these little things in life. Not to mention reply to some of the letters that I have received from some of the members of the Typosphere. I really, really need to get onto that. Sorry Ken.

I seem to be missing out on a lot of late. I haven't had the time or mindspace to read Teeritz's latest Bond fan fiction. I haven't had time to mow the lawn, wash the car, or even just... call my sister and tell her that I wont be coming down to Melbourne for Christmas.

I really should get onto that last one. Maybe I'm just procrastinating on that... and the lawn.

Work has been something of theme park mess of late. One moment I'll be on the workplace emotional roller-coaster, only to then jump onto the workload dodgem-cars. 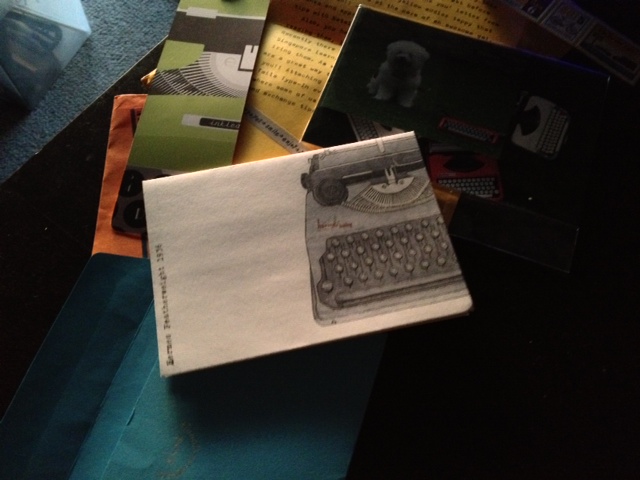 A lot of the Typosphere bloggers may have noticed something interesting of late - a large amount of page views from Singapore. I'd been hearing rumors of a passionate crowd of users and collectors in Singapore for a while, and I was delighted to recieve some letters from some of the Singapore crew.

Not just letters.... Oh no.... But photos of typewriters and a puppy, a bookmark that looks a lot like my Lettera 22, stamps and beautiful envelopes. One of the letters even came bound in a card depicting a wondeful sketch of the writer's Hermes Baby Featherweight typewriter.

Seriously, this was nice stuff. 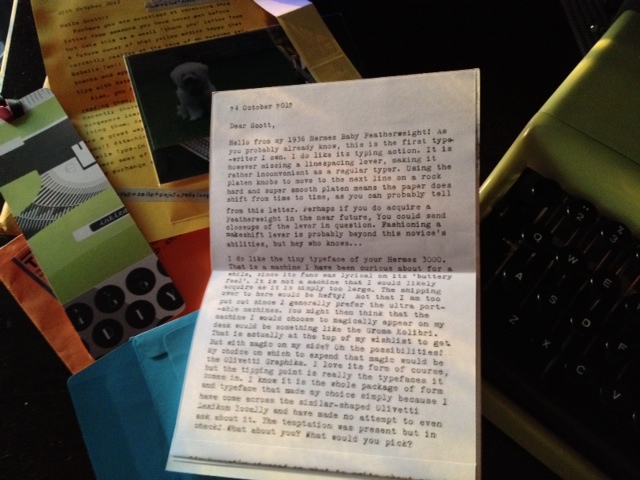 My lettera 22 looks over my collection of goodies! Look at that awesome bookmark!

Firstly I received a letter from Caroline C, who can be found over at the Inkleaves blog. She was replying to my original ICI letter, but did it in far grander style. A beautiful Lettera bookmark along with the card made from a sketch of Caroline's Hermes machine accompanied the letter in a striking blue envelope. 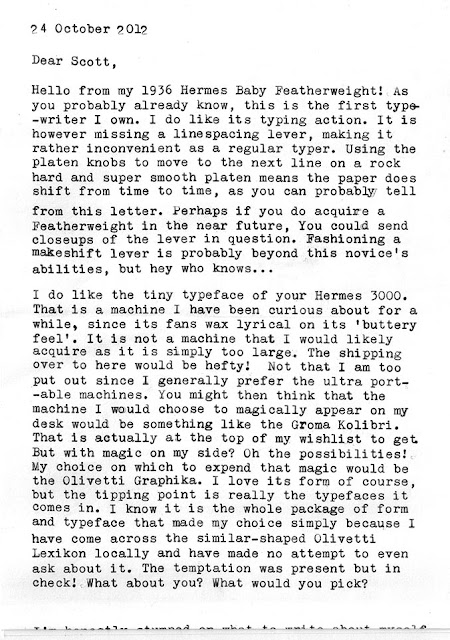 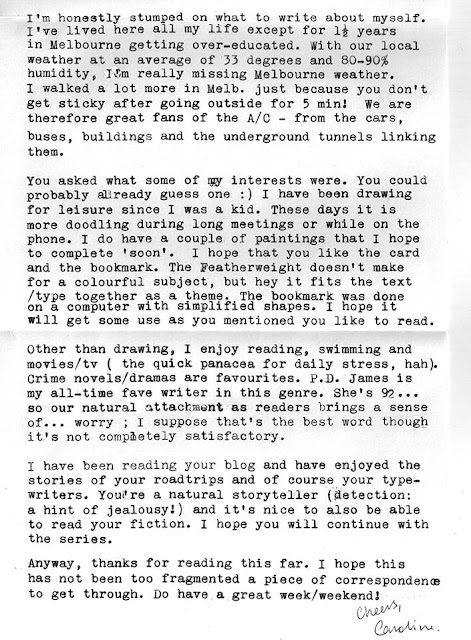 On the same day that Caroline's letter arrived, another letter from Singapore appeared in my letterbox. It was another beautifully written letter that was a thank-you note for helping repair a typewriter. It came adorned with gifts and goodies that I also enjoyed.

But this letter was different. One of the first things I noticed was that the letter had a distinct lack of the sender's details. The writer's name was no-where to be seen! Also it was a thank-you note for helping repair a typewriter that I had not even laid a hand on. Actually, I lived approximately half a country away from the typewriter. Not only that, but the person writing the note had yet to actually touch the typewriter themselves!

Confused? I was a little at first...

Nat over at the NatsLapTaps blog had a little issue with her Adler Tippa one evening. To help her fix the problem I grabbed my own Tippa and set about dismantling it, and re constructing it while I sent her instructions live via Facebook's chat function. I didn't know it at the time, but the Tippa was to soon be delivered to one of Nat's friends in Singapore, and it was this friend that sent me the lovely little package.

I'm hoping they'll write again soon with their Tippa... this time with their name, so I can write back to them! One good turn certainly deserves another. It was very touching to get a thank-you note like this - so completely unexpectedly.

Nat is also from Singapore, but is currently living in the Australian city of Darwin. There's a nice road between my city (Brisbane) and Darwin, but it is hard 3 to 4 day drive through some of the most desolate countryside that I have ever come across.

Nat also sent me a little envelope with a bit of a treat inside. 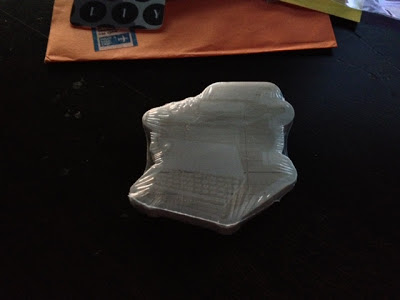 Nat informs me that these are actually pretty rough to use, and are more ornamental than anything. Sounds a bit like the typewriter that it depicts actually.

But is this all I got from Singapore?

While all of this was going on, my friend 'Mars' (no, she isn't typewriter people) took a bit of a trip to Singapore. Mars and I often discuss blogging and online goings-on, and you can find Mars's 'Mars on life' blog over here.

Coming back from Singapore with Mars were a couple of very funky little gifts that now sit my desk. Firstly, there's the globe.... 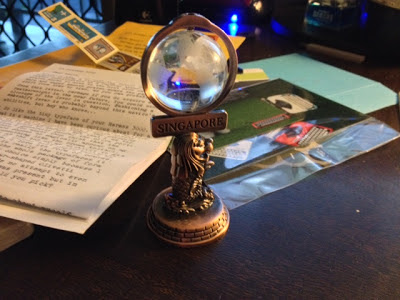 Ms Jane floated past my desk not long after I put the globet next to my computer. A subsequent fight to the death ensued, and I only narrowly escaped having the globe stolen and relocated to her desk at work. Which would have been bad, as her desk at work is in a building that was heavily damaged by the storm I mentioned in my last blog entry, and is currently uninhabitable.

But Mars also got me this -- super cool pop culture mouse mat. 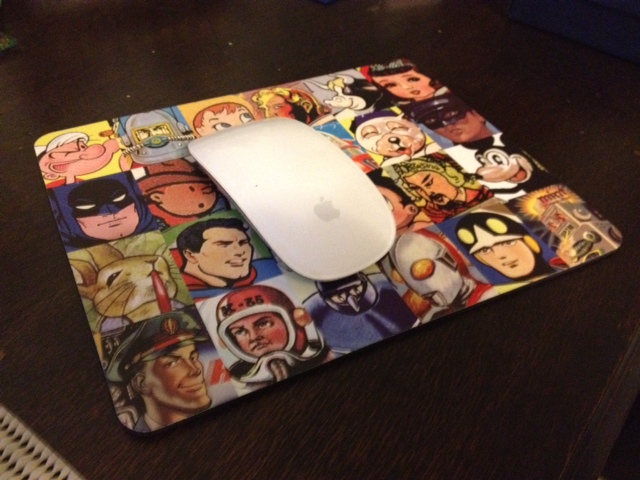 This awesome stuff is now all over my desk, and I feel really guilty for not responding to anyone's letters and posts of late. Caroline gave me a little prompt on my page the other day, reminding me of her letter (yes... I got it about 2 weeks ago, Sorry!) and as such has prompted me to get off my butt and actually post a blog.

Actually, more accurately she prompted me to get ON my butt and tap out a response on my blog.

Anyway, thanks a heap guys - you came at just the right time. Singapore, I've yet to visit you... but you're clearly awesome!
Posted by Scott K at 03:18