Now... I'll be frank. I'm not a Christmas-y person. There's no decorated tree in my home, no tinsel to filthy the carpet, and only a handful of Christmas cards are handed out to people that I feel are important.

...... buuuuuuuut. I"m not a Scrooge either. So there's no need to send the ghosts of Christmas past, present and future.

It isn't that I dislike Christmas. I just feel that the important things tend to get left behind in the flurry of decorating, carol indulgence and present collecting. For some, that importance is their religion. In the typosphere blogs that I've read of late, there's been a little discussion about what this period means to most of the religious typists amongst us.

But to me, Christmas has always been about connections with family. While friends and people around me often declare 'Jesus is the reason for the season', the nativity scenes, caroling, biblical posturing and religious paraphernalia will often feels like stapled on additions. And historically speaking, they are - even by christian standards.

Here in Australia it is the summer solstice. For pretty much the entirety of man's occupation of this continent, the solstice period had never been observed with any religious belief. Considering there's evidence that people have lived here for at least 120,000 years, the celebrations of the solstice around here over the last 200 or so -- seems to be a relatively recent fad.

I often feel a twinge of disappointment around Christmas time. My birthday is a week out from Christmas, and due to its proximity to the big event it is pretty much not celebrated. While as adults we don't exactly make a big deal about birthdays, it is unheard of, of someone surprising me with just something as simple as a handful of friends heading out to a bar, or even just to have dinner somewhere. If I want to do something for my birthday I usually have to organize it with major effort and anticipate a close to nothing turn out. I'm usually lucky if people remember my birthday at all actually... it is just too busy at this time if year.

That said, my (now ex) boss wandered by my office the other day. She had heavily loaded bags filled with Christmas presents for people around work. But she had also bought me a birthday present. A money box! And what an awesome money box it was too.... 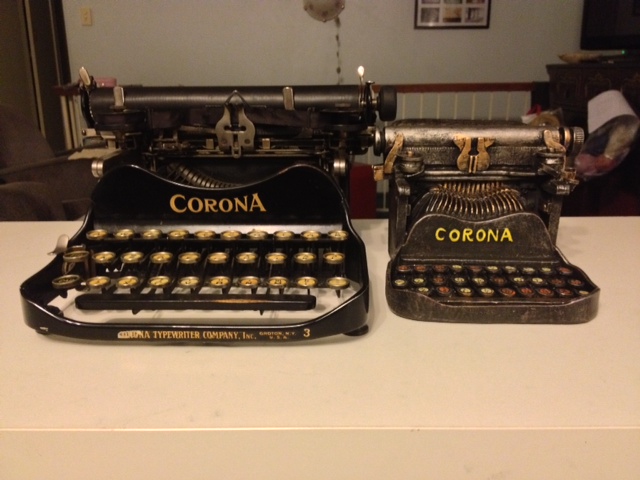 Next to my Apothecary Corona 3... My Corona money box!

She didn't even know I owned a Corona 3 (let alone what one of those were), and was pretty much shocked when I sent her this photo above - showing her the real thing, along side the money box that she had bought me.


Just for reference... no, the money box doesn't fold for storage.

And can I just say... I'm quite chuffed. Sure, the real thing is cooler than the copy, but seriously... look at the detail on this freakin' money box! It is three bank, with a fig key... and also has the knobs and paper supports all in the right places. It even has the curved paper table!

I got another surprise gift last week too. This wasn't a birthday present, but a gift from Jess in Singapore. It turns out that Jess was the lovely lady who had written me that thank you note a little while back, and she had recently bought an armful of ribbons from a typewriter specialist in Singapore. I had just finished dunking and cleaning out machine, and as I had never used a cotton ribbon before I immediately slipped the black and red ribbon into the freshly repaired and serviced typer.  The results were interesting and varied. While the ribbon a left very bold and thick impressions - and were clearly heavily filled with ink, it was a little hard to read. I expect this to improve as the ribbon's ink stabilizes. While I had the machine out, I decided to write a bit of an Australian Christmas typecast.

So enjoy - the Filthy Platen Christmas Special!
Pardon some of my tragic writing mistakes. It was a rushed out draft after all. 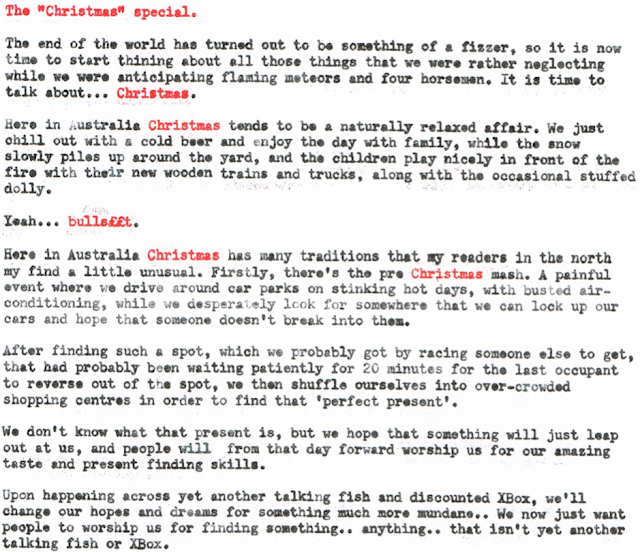 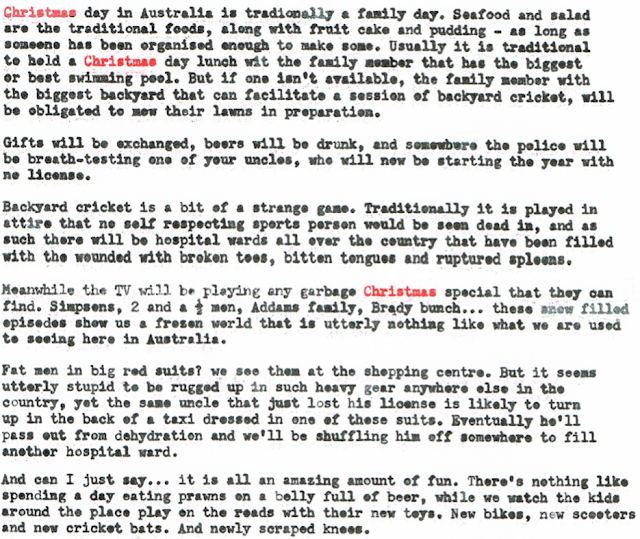 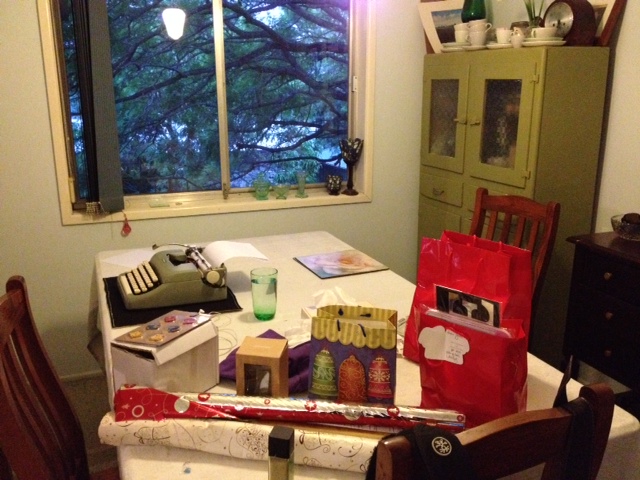 My HG Palmer, and a pile of Christmas preparations and presents.