Welcome to my 100th post. Now, if you are the jealous type - I suggest you don't read past this sentence. 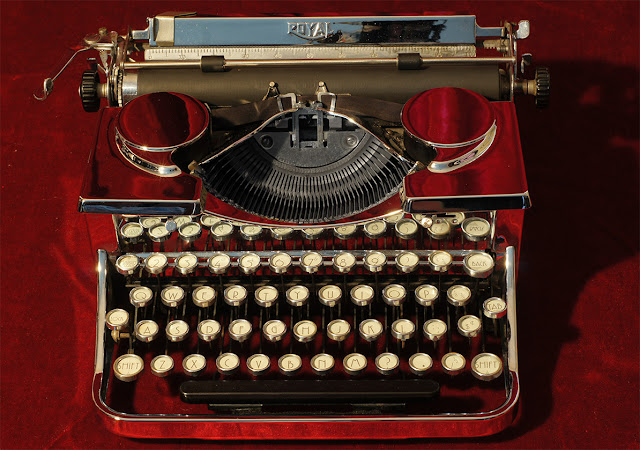 The finished product - The Royal Chrome gets the red velvet treatment.

I have to say, all the work I have done to this machine has been worthwhile. I probably spent about 20 hours all up (so far) on getting this machine into excellent working condition - and every time I look at its gleaming shell, I have to say - it was worth it.

A large part of those 20 hours consisted of me just trying to repair the original parts of the typewriter. But as with everything antique restoration related, there comes a point where you have to make some difficult decisions on how to progress. And there was one very difficult decision that I made early on, which I'm still unsure that I have done the right thing.

Meet Gatsby :-
Hunting down the parts machine to complete this project took a lot of time and patience. But there was a machine that I had in my possession the whole time which I could have taken apart at any moment, and made one of the ultimate typewriter enthusiasts dream machines. 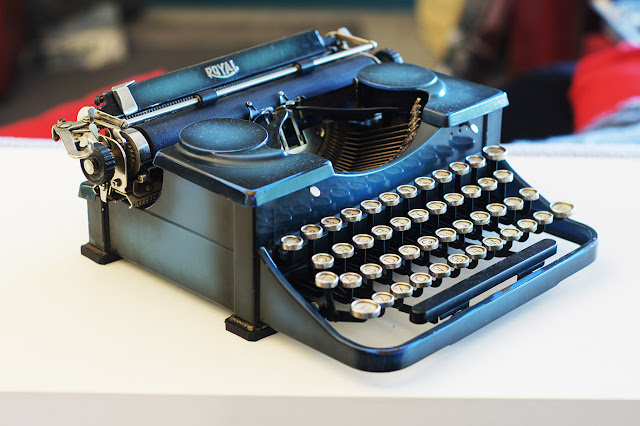 Around the time that Rob Messenger handed me the 'desperately in need of repair' Royal Chrome, this machine was sitting in the post-office awaiting my collection. The postie had neglected to leave a notification in my letterbox, and the post office was only 2 days away from sending it to the unclaimed post auction house - when I came in and inquired if any packages had been waiting for me.

I had bought this machine on ebay about a month before, and I have to say it wasn't cheap. On the auction, the item looked in dreadful condition. But after a couple of hours of work on my desk, including sourcing a replacement platen as the rubber on this one was split, I had the machine looking worn but beautiful - and typing like it had just come from the store.

I called it 'Gatsby' before I even had heard of the impending film. And other than the seemingly extravagant cost (I'll point out that I've seen others pay much, much more for similar machines) there was one other reason that I called this machine Gatsby.

Yes. Gatsby is a Vogue machine.

In the end, I couldn't do it. I've been using Gatsby for correspondence ever since, and it is one of my all time favorite typewriters. Not just because of the sheer beauty of it, but also because it types so well. 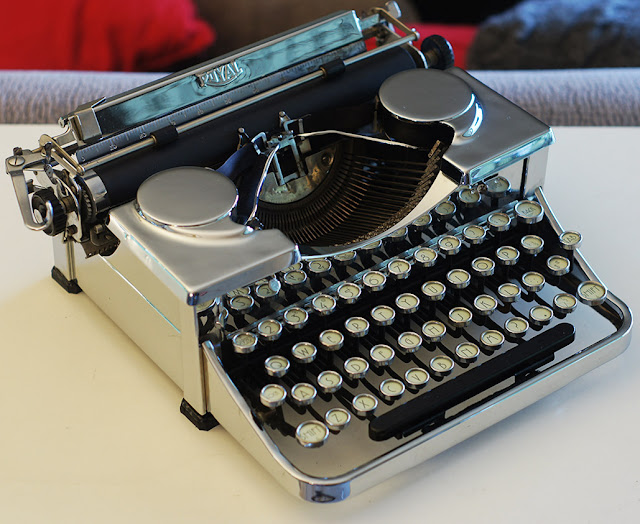 The parts machine cost me about $30 in total - including postage, and it was in hideous condition. It had once had an 'alligator' textured blue paint-job, but Much of that had been chipped or rusted away. Some of the bolts holding the shell on were also heavily rusted. So rusted, that I had to use a grinder to cut some of them off.

Mechanically the typewriter was in crap-with-potential condition. Some of the chromed parts were flaking, but for the most part there was no sign of rust or oxidization on the crucial parts of the machine. The keys were almost frozen from the application of WD40 to them, but this was easily removed - first by spraying WD40 into them again, and then using de-greaser to remove the WD.

But the keys were a problem. The paper slips on the keys were black, which didn't suit the machine at all. When I had bolted it all together, it became clear that the black (as opposed to the original off-white that the Chrome machine had) were going to have to go.

If I had have used Gatsby as a parts machine for this typewriter, I never would have done what I did next.

Replacing the keys:
It had become obvious that I needed to replace the paper slips in the keys. Much of the existing paper slips on the machine were seriously damaged as it was, and it was clear that the glass needed to be lifted off the keys and cleaned.

So I started to remove the keytops.

I'd seen people talking about removing keytops before, and how it would probably be too easy to break the metal tabs that hold the keytops in place, but there didn't seem to be anyone that had actually done so - at least in the yahoo forums.


So I thought to myself "If the metal is that fragile, they should pry off easily. I'll just be careful not to break them".

Oh typosphere, how wrong was I.

It took me somewhere between 2 to 3 hours to remove the keytops, and I didn't break a single one. Not because I was careful and gentle, but because the metal on them is a hell of a lot tougher than you might think. Prying the tabs off was extremely difficult to do by hand, and even once they were open the tops didn't just simply fall off. Oh no... those rings grip like Tarzan. I had to prop each key against a socket that pushed against the glass side only, and then push down on the back of the ring with a screw driver which I then bashed with a hammer - working in a circular motion around the key, until the ring finally dropped off.

After all this was done, I simply had to walk away from the typewriter. It had been really nerve-racking hard work doing all this without breaking a glass insert, or metal band. I came back to it about 2 weeks later.

In those two weeks, I had done some other work. I wanted to make this machine's Art Deco styling really stand out, so I selected a Deco font that would really grab the imagination, while still being easy enough to read at a glace - for the casual not-so-touch-typist. I wanted this machine to really, really capture the opulent feel of the era.

And then there was the paper selection. I grabbed samples of about 6 different types of paper and produced keyboard templates on them. I tried Pearlized paper (has a pearl type shimmer and texture to it) and even found some mother-of-pearl discs the right size to use. The mother of pearl idea was quickly dashed, when I couldn't find a way to effectively print on the discs.

Then, I got some samples of Opalescent paper. In the light it had a beautiful shimmer that when looked at from a certain angle, would change in colour. The sample that I printed on the very pale green looked beautiful, so I produced a final template and then set about cutting the slips out.

Which is where this tool came in useful. 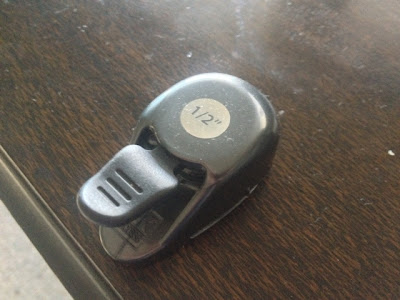 It is a half-inch paper punch - which is the perfect size for the paper-slips needed on the keys. By turning this punch upside down, I was able to line up the paper template through the dump-hole, and produce perfectly sized slips. These punches are available from scrap-book suppliers. Just try to avoid buying the 'heart shape' ones, as there seems to be an over abundance of them around.

As the keyboard started to come together I got more and more excited. I posted a couple of hinting photographs to Rob Messenger, so he could see what result was coming from his former typewriter - and I even dropped a couple of them onto the Antique Typewriter forum on facebook, for everyone else to get an idea of what I was working on.

The end result is, albeit subjectively, stunning and unique. 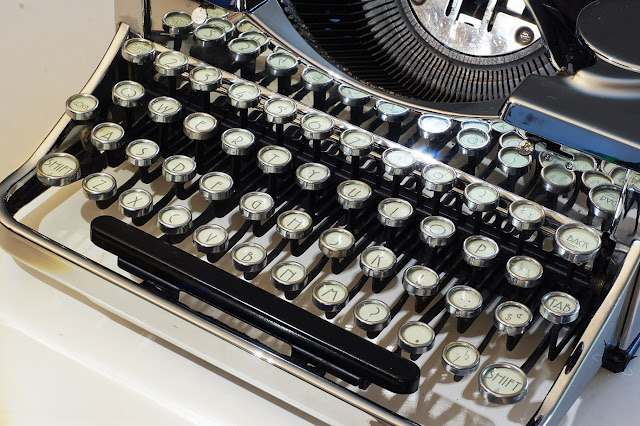 Click to enlarge. It it has been very difficult to photograph this typewriter and capture the green. But you can see it hinted in the reflection - which also shows how the keys change tone depending on the angle of view.

A couple of months after I finished the keyboard of this machine, I discovered that John Lavery had a keytop ring remover tool. The tool is so effective, that it would have taken me less then 5 minutes to strip the keyboard, making a mockery of my 2 - 3 hours of hard work.

The mechanical parts of the machine were not exactly... perfect. But I was able to retrieve plenty of parts from the original machine's guts to piece together the a 100% complete machine. In fact, it is more than 100%. The original machine had a missing shift key on the right hand side, which had somehow been broken off. The new parts machine also sported a tab mechanism, which with a bit of wrangling, I was able to fit into the new machine. So it can now tab!

I also manufactured new rubber feet for both the Chrome, and Gatsby - so both machines grip to the table effectively and steadily.

There's a couple of damaged pieces of old chrome that came across from the parts machine. These can be repaired, but it will take time. Also the chrome machine doesn't actually have any colouring to indicate the locations on the ribbon colour selector.

I haven't done much research on the materials I need to finish this machine off yet, but I have decided that I am going to colour-in the colour selector indicator by setting jewels into the case.

After all, if you want Art Deco - roaring 20's opulence, why not set red, blue and clear jewels of some kind into the case - and make it truly unique! Erm... but... that will cost money, which I don't really have. Maybe plastic replicas? Nah....

Some work needs to be done to the case as well, and I've been thinking about using something to line the case with, that will compliment the beauty of the machine.

This machine is a real head-turner, but is very hard to keep clean. The chrome shows up finger-prints like nothing, and I have shoved a microfiber cloth into the case with the machine so it can be wiped down when I take it out on the road.

But, I think I have triumphed over the challenge of getting this beautiful Royal back to work - with a truly spectacular end result. 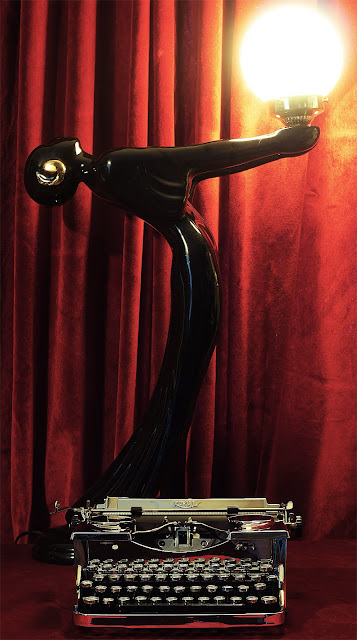