Has a typewriter? Must be a hipster... 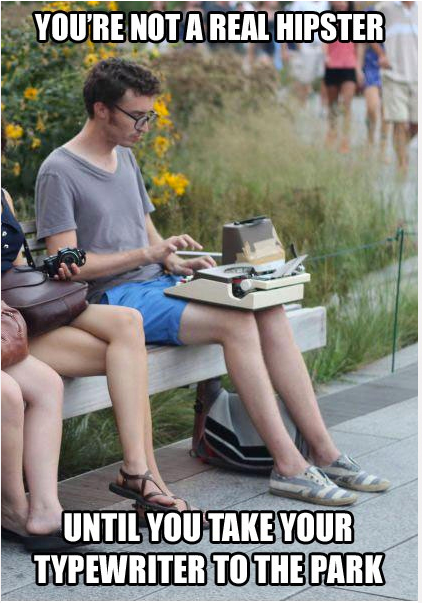 Typewriter in a park? Just add the word hipster, and you apparently have instant comedy.

Anyway, that 'meme' has been cycling about on the knuckle-dragger interwebs for a while now, and let's face it - it is pretty insulting to the guy photographed. I mean, like.... seriously... who takes a typewriter to a park anyway, right? It is 50 shades of weird to anyone that hasn't done anything interesting in their life, other than fly to Bangkok at huge expense in order to spend the entire trip getting drunk in a bar or pub just like one at home.

For some reason I have an urge to put a label on anyone that labels someone as a hipster for using a typewriter - or something similar. 'Dipster' perhaps?

Well it turns out that there's actually quite a compelling and interest story behind this typist. As I read it I felt sympathetic for him, not just as another typist, but as a person. He'd gone out and actually done something interesting. He went and did something different to the expectations of his family and friends, and actually created something. The fact that he created something that was positive and interesting, yet was belittled by keyboard commandos world wide that had dull and uninteresting lives lived in a perpetual cycle of doing the same dull lifeless routine that saw them lashing out at the rest of the world that wasn't trapped in the same hole, made me feel inspired.

It just reminds me about something Teeritz was talking about the other day - the utter dross of reality TV that people glue their social lives to here in Audtralia at the moment. It pretends to be art, but there's no art to it. There's no spontaneity. It is a performance, but it is a predictable performance.

Congratulations to this guy for getting himself out of his lounge room and doing something.

I think I can speak on behalf of the typosphere here,  when I say - we salute you.
Posted by Scott K at 04:01