Round 1: Scott v's The Royal P

Warning: This blog entry is rated MA - for mature audiences.
*Occasional coarse language. Which has nominally been bleeped out for you protection.
*Low level violence.
*Frequent bad movie references.

This war, like all wars, started in a period of relative peace. I like relative peace. It is so peaceful in a relative way that I almost lull myself into a sense of security, before I snap myself out of it - in anticipation of the next major crisis.

And no, I haven't built a bunker for the impending 2012 disaster and filled it with cans of Spam, beans and Camp Pie. I don't have to... I have still have the one set up for the millennium bug disaster. I rented it out to Harold Camping briefly last year, but he left it in almost perfect condition and I haven't seen him since.

It was in this relative peacetime that I took a trip down to Canberra. While I was there Robert Messenger gave me two beautiful typewriters. A Bijou 5 and a chromed Royal P. 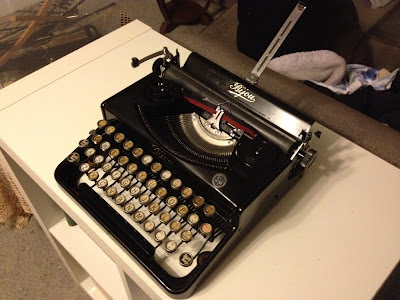 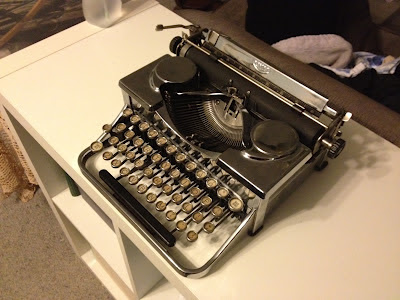 The Royal P from hell.

Both machines are stunningly beautiful. The Royal P in person is one of the most amazingly beautiful machines I have ever seen. With gleaming glass keys along with its chromed body, this machine looks so sharp, I feared touching it for ending up with bloodied fingers

Both machines have their problems. The Bijou's are simple and straight-forward. The Royal however, had a few faults that were likely to need some more serious attention. While Robert and I were talking at his house, he implied that the machine would need a complete teardown and rebuild. I felt this was a touch extreme, but i suspected that thee machine's frame - or at least internals, were somewhat warped.

The shell wasn't lining up with the body and some of the type bars were raised in the segment - but not as a result of being jammed with muck. The reason wasn't immediately obvious.

Also, the carriage wouldn't stay put. When the carriage moved closer to the middle of the unit, it would suddenly take off - before the escapement came back into play a couple of inches later, and the typewriter seemed to start operating again in typical fashion.

Outside of that most of the screws holding the body onto the machine were missing, as were a couple of springs that lock down the ribbon covers. The rubber feet were non-existant. On the plus side the platen appeared to have been re-covered sometime in the last 20 years, and although it showed signs of lots of typing activity it was still very nice and rubbery.

Looking at the machine from the front, I should have known what was going to come next. This machine is trouble - under the stunning supermodel looks was a machine with an attitude of pure ugliness. It was the epitome of the phrase "Beauty is only skin deep".

As I looked at the machine it felt as though the middle type bar was raised that little more than the others intentionally. Surely this machine wasn't giving me 'the finger'? Typewriters don't flip the bird...

But can I tell you folks... The machine damn well was giving me the same big 'f**k you' as I suspect it had given the previous ambitious repairers before me.

The day after I got back from Canberra I extracted the machine from its case. The case had been a huge problem the day before, and had taken Robert roughly quarter of an hour to find a case that would hold the machine. Even then, it refused to be locked into the case properly, and I had stuffed bubble wrap around it to give a level of protection. Unfortunately I had to shift a lot of that bubble wrap at the airport  so that the security team could 'bomb check' it.

It put up a bit of a fight at the airport, and had almost tumbled onto the floor. The same thing happened at home the next day. Eventually I managed to get it out of the case, and I plopped it onto the top of cupboard nearest my desk.

I inspected it for a while and started to take a note of some of the faults. As I did the escapement seemed to loosen up somehow and the machine launched its carriage into my face, almost hitting my eye. Surprised by this, I recoiled away from the machine. The carriage slipped a tiny notch along its escapement by itself before once again engaging and sitting silently.

I felt like Rocky. This was going to be a tough repair, but if I played eye of the tiger often enough and ran up and down the stairs a few times (my tools were in the shed down stairs) eventually this movie would end in my triumph. I'd raise my hands in victory and call out through my numb but joyous face "ADRIAN! ADRIAN!"

I pushed the carriage back to the middle again, and felt the escapement travel with the machine perfectly. I let go of it, and less than a second later the carriage launched itself left again, but only a few stops.

"You little prick" I muttered quietly, before continuing: "So this is how you're going to play, huh"?

I grabbed the machine and flipped it onto it's tail to inspect the underside of the machine. I couldn't see any misalignment, nor could I find any broken springs, levers or teeth. I rotated the machine back over onto the steel bolts that it is currently using as feet, and scratched my head a little.

I turned the machine around and looked down the rails from the right hand side (spring loaded part away from my eye) and carefully released the escapement and slid the carriage. Again, I could not observe any major fault, even when I tapped on the space-bar and keys. 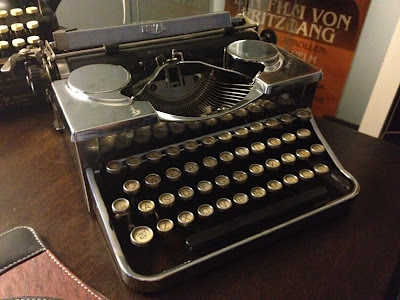 Again I looked at the machine from the front of the keyboard, and started to thank about how I could dismantle it to have a better look. I tapped the space bar and keys roughly and.....

The carriage raced across to the left and slammed against the right margin. A small black piece of something shot out the side of the machine and skidded across the surface of the cupboard.

It was clear what this was. My opponent had now moved beyond the trash talk - the "F**k you" finger raising, and after copping a few whacks - had just spat out a loose tooth at me. It was ready for a fight.

The sound that it made as the part skipped across the table told me instantly that his wasn't rubber or plastic. It was metal... cold and hard metal. Crucial part kind of metal. 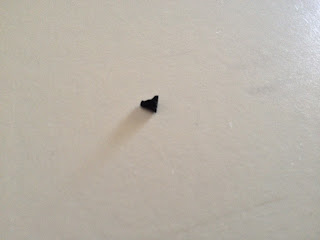 I knew what this piece was. It was a tooth off the escapement wheel which was located deep in the middle of the machine. This part is as difficult to get to, as it is to find a replacement for.

There was a moment of silence between me and the machine. Till I leaned over and spoke quietly to it.

"I don't know who you are. I don't know what you want. If you are looking for ransom, I can tell you I don't have money. But what I do have are a very particular set of skills; skills I have acquired over a very long career. Skills that make me a nightmare for typewriters like you. If you play good now, that'll be the end of it. I will not dismantle you, I will not transplant you. But if you don't, I will find you, and I will kill you"

I slid the carriage back to the centre, but the escapement almost immediately slipped a little... Just a little...

And with that  I reached my hands in (with the aid of a screwdriver or two) and tore out the machine's still beating heart - the platen. Screws and knobs lay strewn across my table, and I held the platen in my fist above the typewriter to show it what I had done. It sat there with its mouth wide open - almost in shock.

I grabbed the filthy and cracked platen from another Royal I was working on and drove it into place of the original platen. I screwed it all back together again before looking at the machine and saying with malevolence; "There you are - the ugliness on the outside now reflects the madness that you have on the inside. You shall wear that scar to remind you - every day - that you have crossed the wrong repairer".

And with that, I shoved the chrome Royal back into its case, and locked it into the cupboard.

I had promised Rob that I would repair this machine. And repair it I shall. But I know the battle has only just begun, and this war of egos will eventually come to a head because this town isn't big enough for the two of us.

The first battle was a draw, but the war has begun.

P.S. Has anyone got a trashed Royal portable or some kind?