And not forgetting THIS little type-in

Guzman y Gomez is a Mexican restaurant that is incredibly casual and relaxed, while the food is utterly amazing. The first shop opened up in Fortitude Valley a few years ago, and at the time it was placed nicely along the path I used to take from my old apartment in New Farm, to the hospital that Jane and I worked at.

Often Jane would work much later than myself, so I would often jump on my motorbike, spin by GYG and grab a bag with some burritos and stuff, and just rock up to Jane's office with a magnificent little portable dinner. I think it helped both of us keep our sanity during some pretty tough times.

I soon came to call it 'Mexican Crack' as it was almost addictive in its quality.

Those days are gone now. I miss living in New Farm, but then again GYG is now a fully-fledged chain restaurant and there's one about 10 minutes from where I currently live.

But Fortitude Valley, a district of Brisbane which is well known as the entertainment strip of the city - as well as for its very seedy past, always has a bit of romance to it that you won't find in some suburban shopping centre. And I felt it would be an interesting little spot to bust out with an impromptu type-in.

The benches at GYG are very conducive to having a few typewriters (along with food and alcohol) on them, and I just thought.... why not?

So Natalie an I popped into Ruby the Exxy and headed into the Valley to meet Steve Snow with a couple of my traveller machines that had excellent 'office in a case' covers. 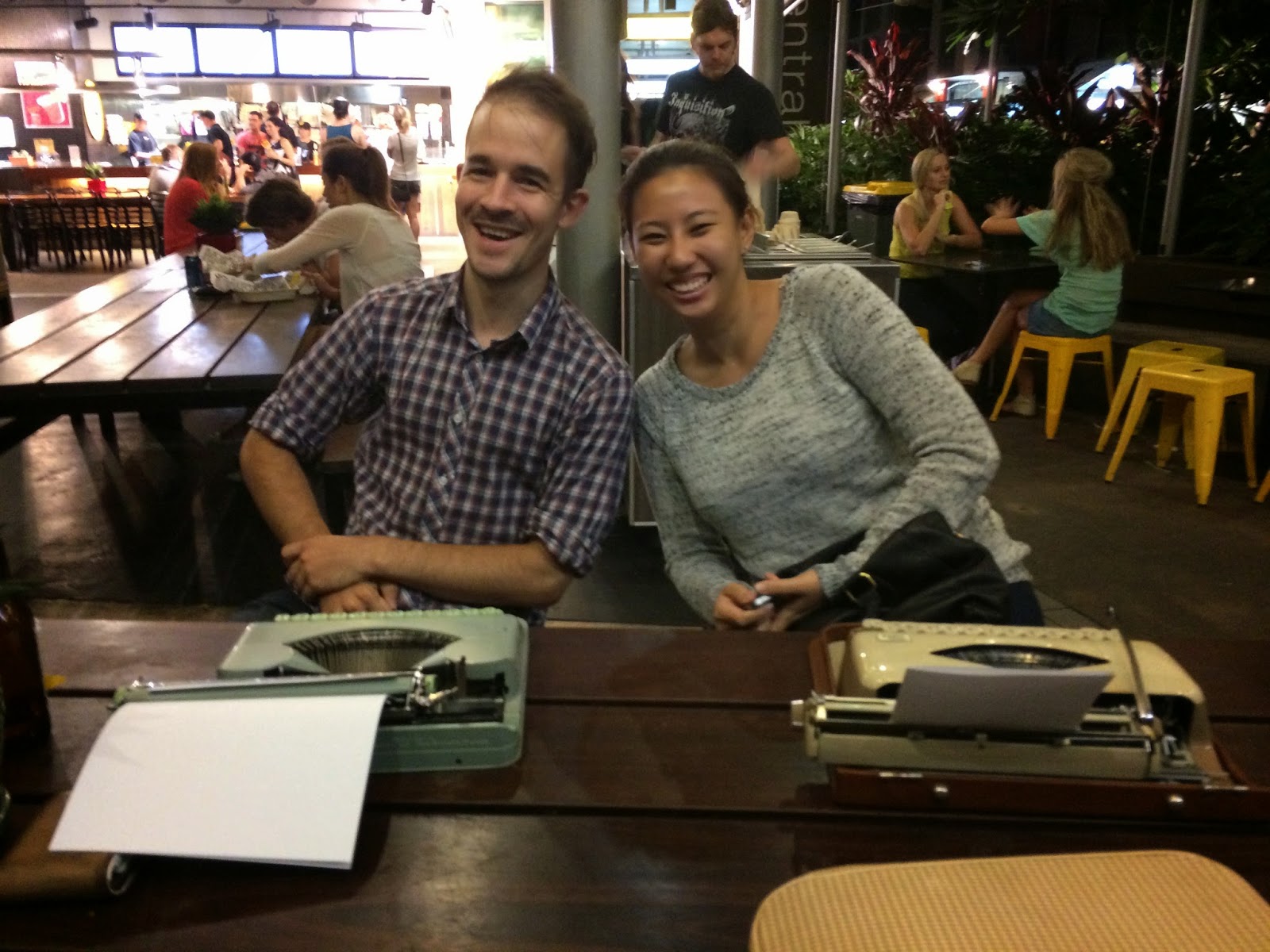 We sat down, ate and talked. And eventually we busted out the typewriters and gave them a bit of a work-out. Oddly, it wasn't long till we attracted the attention of some kids at a table near by and we were soon enjoying the company of a very curious 8 year old girl, and an 11 year old boy. 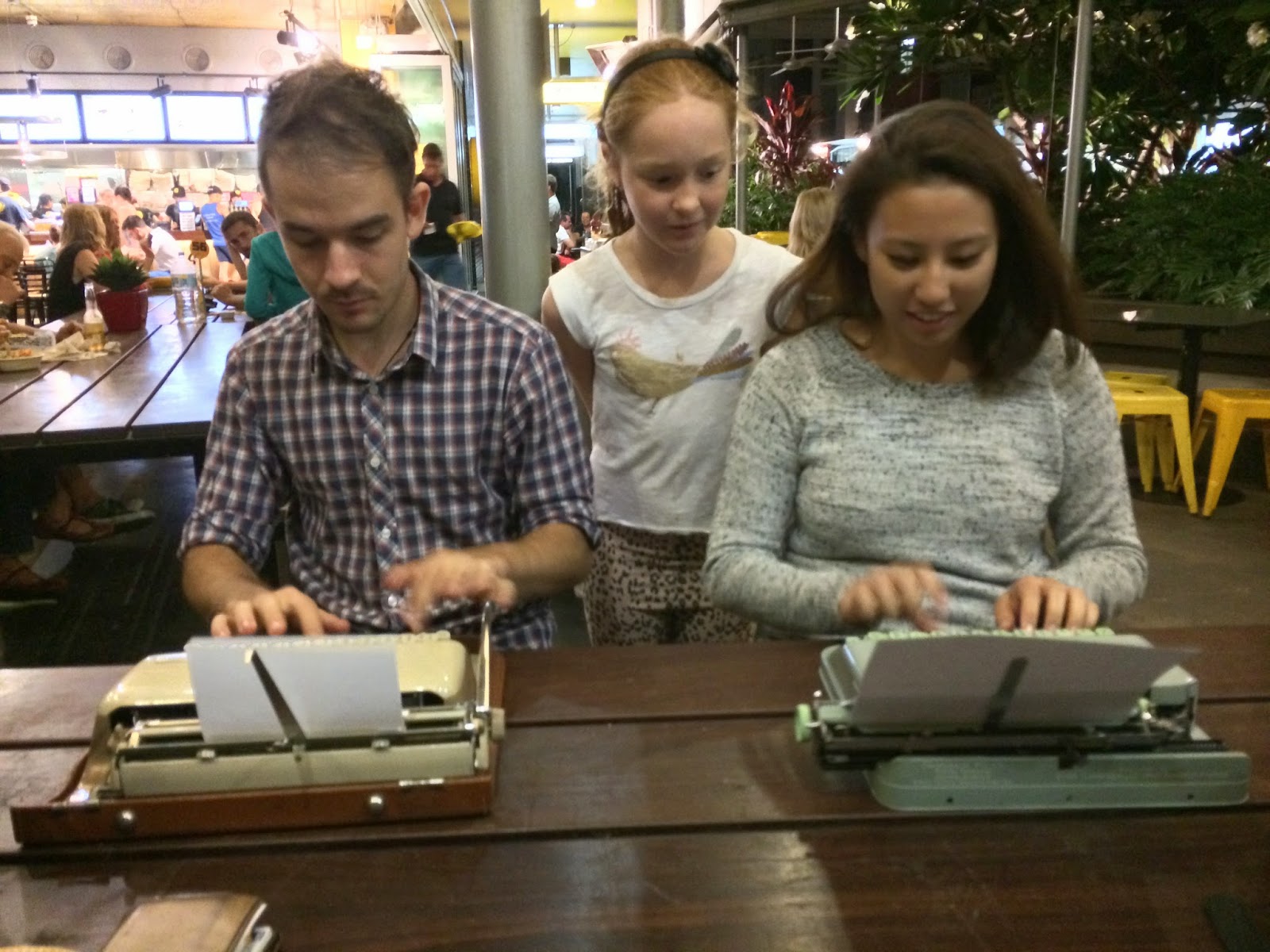 It was lovely. I spend so much of my time at work just looking after sick children, that I found myself sitting back just enjoying the curiosity and enthusiasm of a couple of well ones for a change. There's something about curiosity that no matter how old you are, you always feel young when you indulge your own curiosity.

It wasn't long before the two kids got their hands onto my typewriters - and then it was on for young and old as the kids found games that they could place with the two machines that they could both get into. While the boy was a proficient speller, the younger girl wasn't quite so good at forming sentences. But the young chap was happy for her to lead the play on the two typewriters, and it seemed incredibly civil. 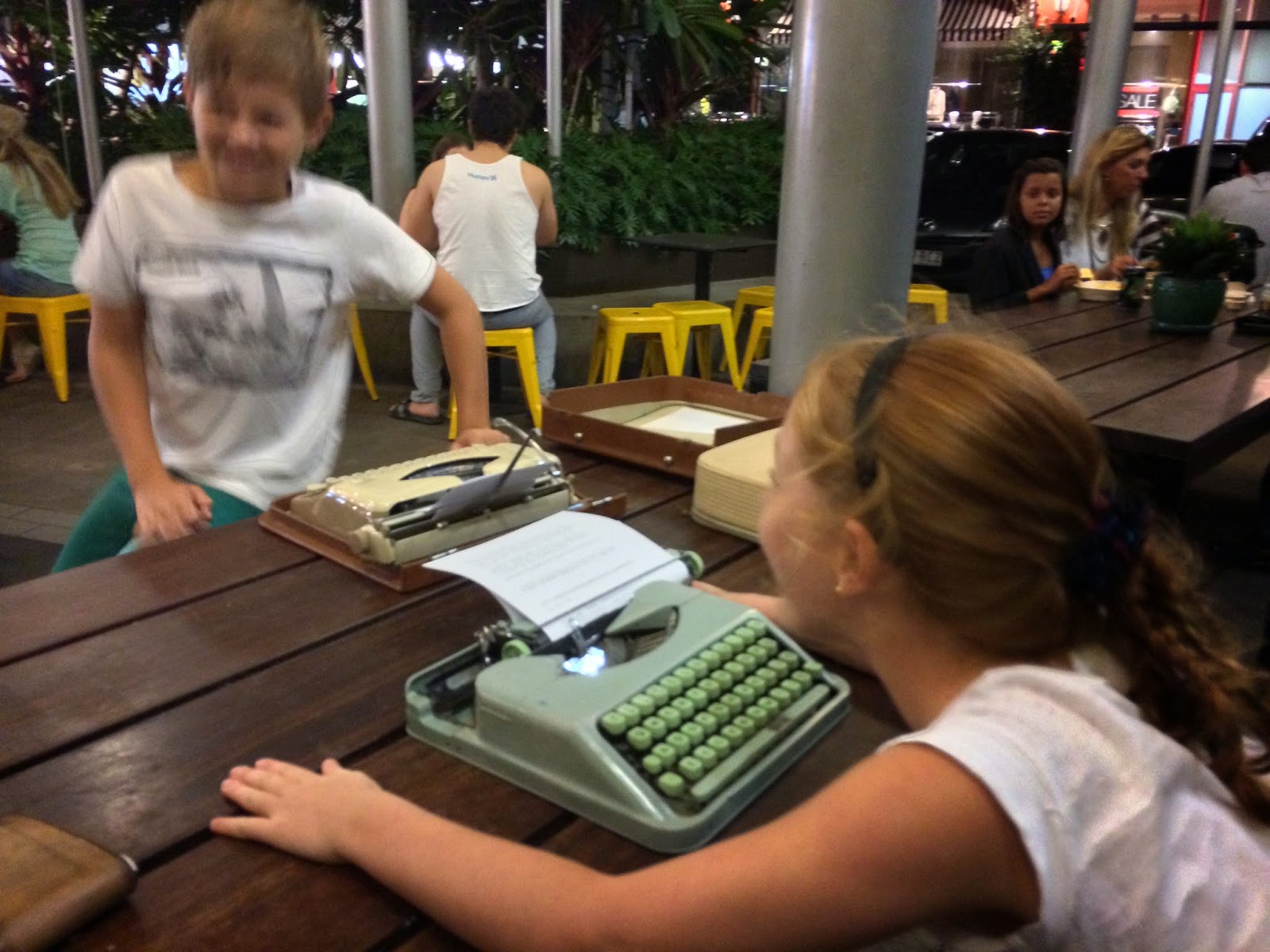 Every so often Natalie or Steve or even myself would wrestle control of one of the typewriters back, and we'd attempt to do some typing - maybe even writing a typecast. But before we could finish there would inevitably be some kind of demand made by our new audience, and we were soon back to playing games again. And it was fun!

Natalie made a good stab at writing a children's story. A little while later the young girl asked me to write a story that involved 'A Shark and a Whale'.

My very improvised 'Shark and a whale' story. (thanks Nat)

Yeah, my story seems like jumbled rubbish, but then again... That's what all the best kids stories do, right?

Anyway. Another girl, a teenager from the same group soon came over, and she popped onto my Triumph Tippa and started writing something to a friend of hers. Photos of the letter still in the typewriter were taken, and facebooked - and soon she left with her copy of her secret tale in hand. And once again another piece of type-written love is out there in the community. 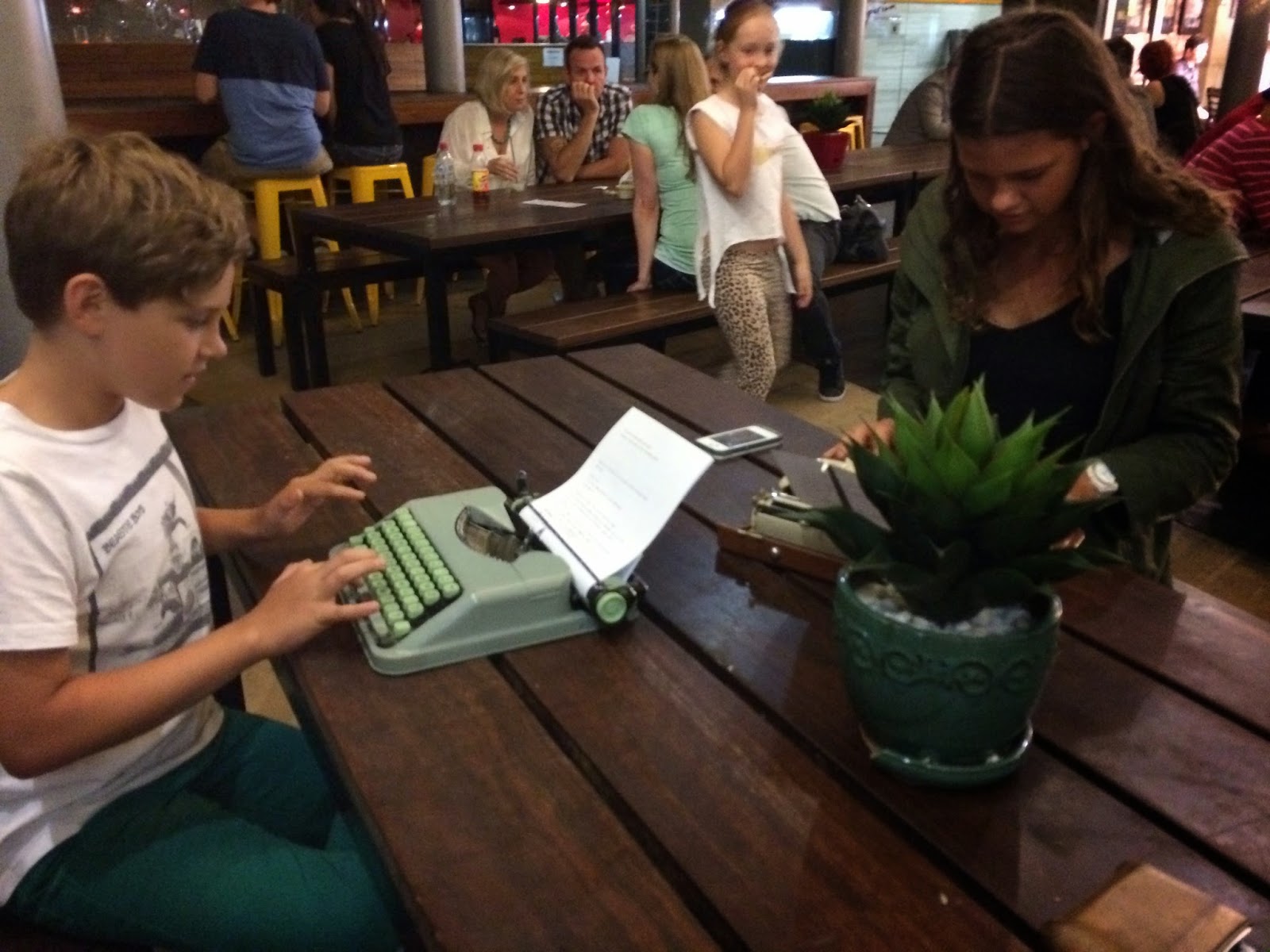 We eventually packed the typewriters up and left the Valley. It was a lovely night, so Steve and I thought we'd show Natalie the view from Mt Coot-tha that looks across the city. 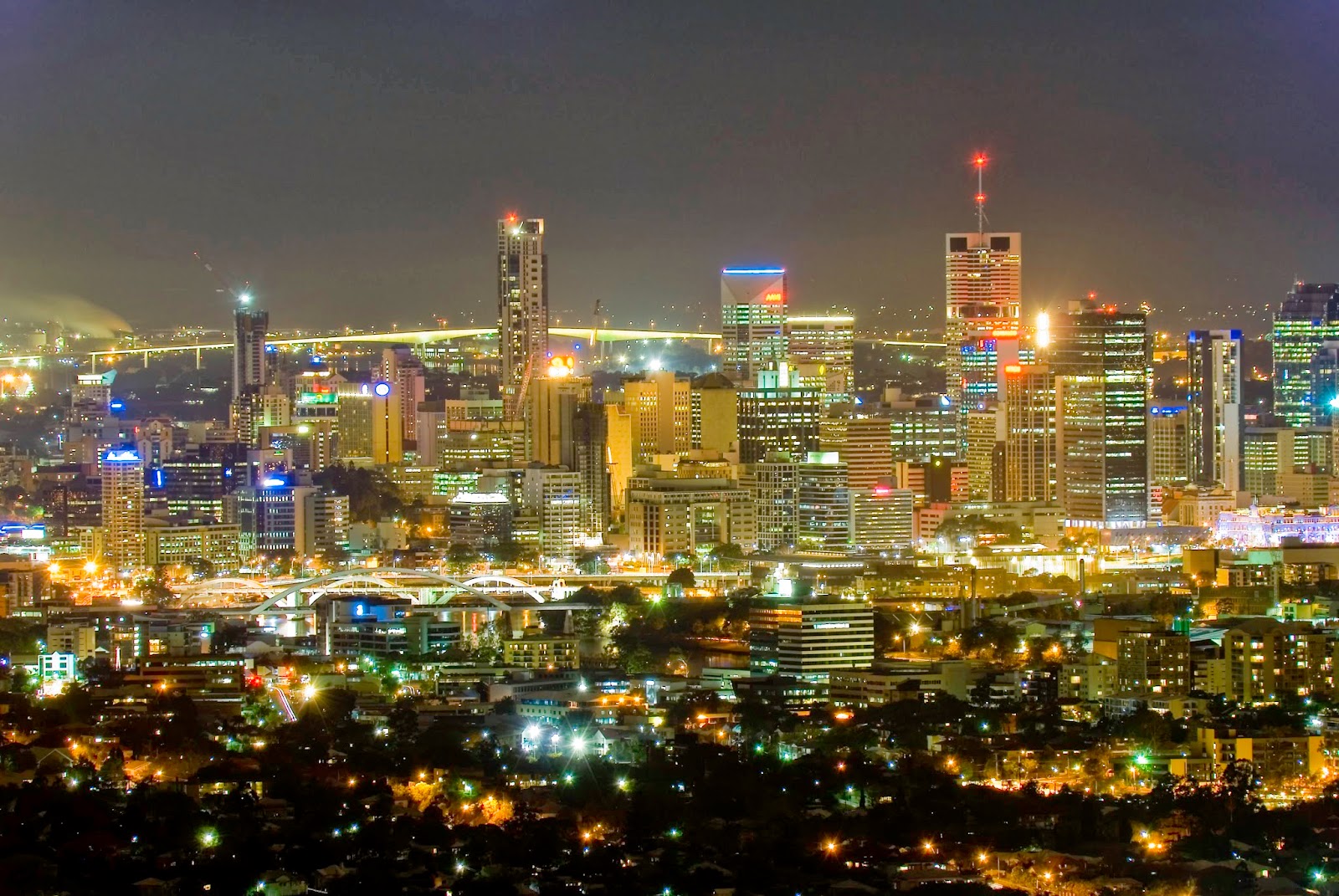 An older photo of mine taken of the view at the top of the mountain.

After that we ended up back at Steve Snow's place where we inspected some of the machines that he had stored up under his bed. Steve had a typewriter that belonged to a friend of his that had been filled with flood waters, and he had told them he'd have a look at getting it going. Steve was slightly optimistic about his prospects, but just wasn't sure what he'd be able to achieve. Of course, I get my claws onto it and without the assistance of anything other than a screw-driver I soon had the machine coming back to life. With a bit of a clean and a few tweaks I'd be confident that Steve would soon have another working Remington.

I have never met a Remington so far that I haven't been able to fix. Maybe my Grandfather's somehow powering that through some kind of weird channeling across the universe, time and space. 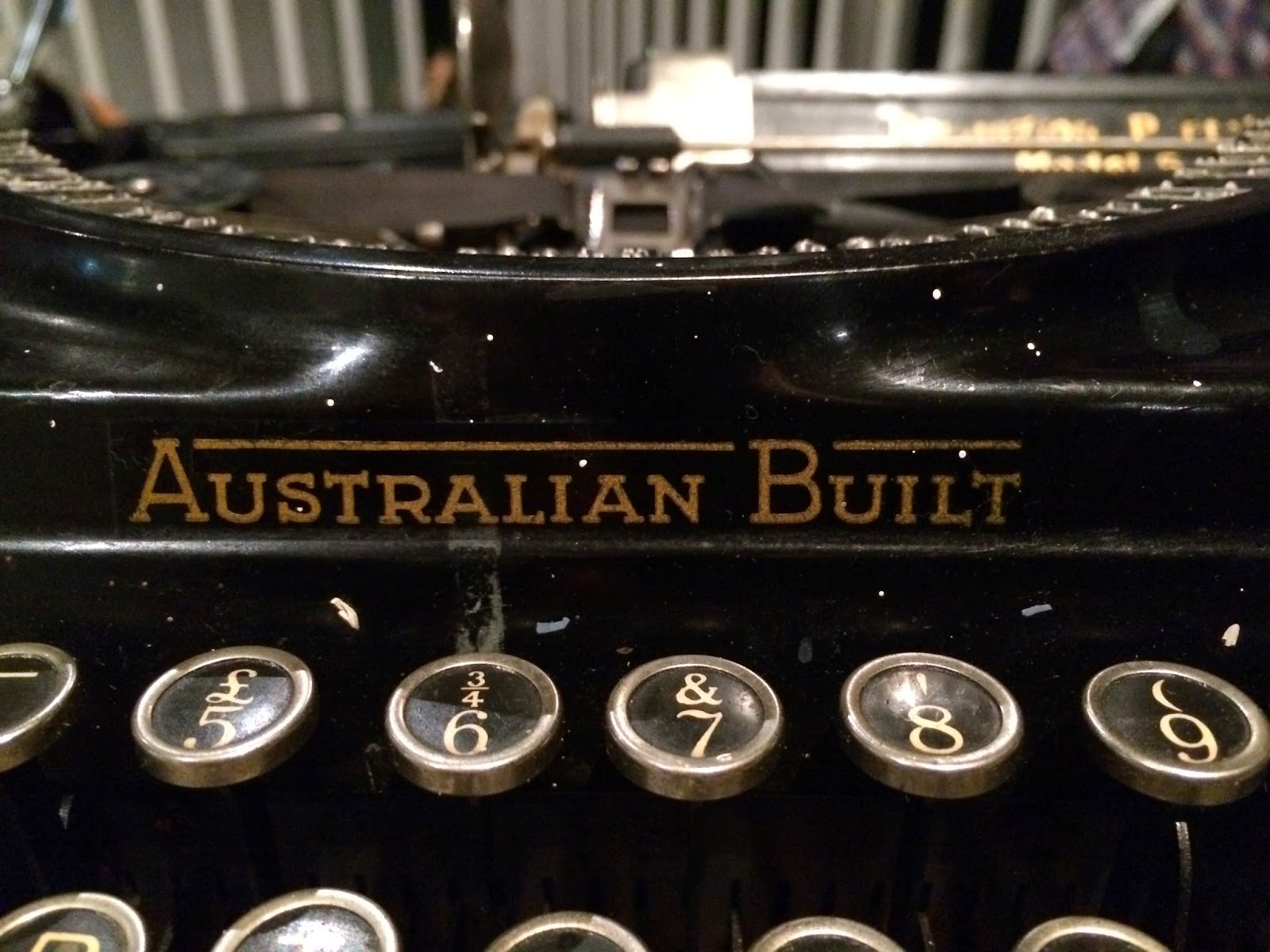 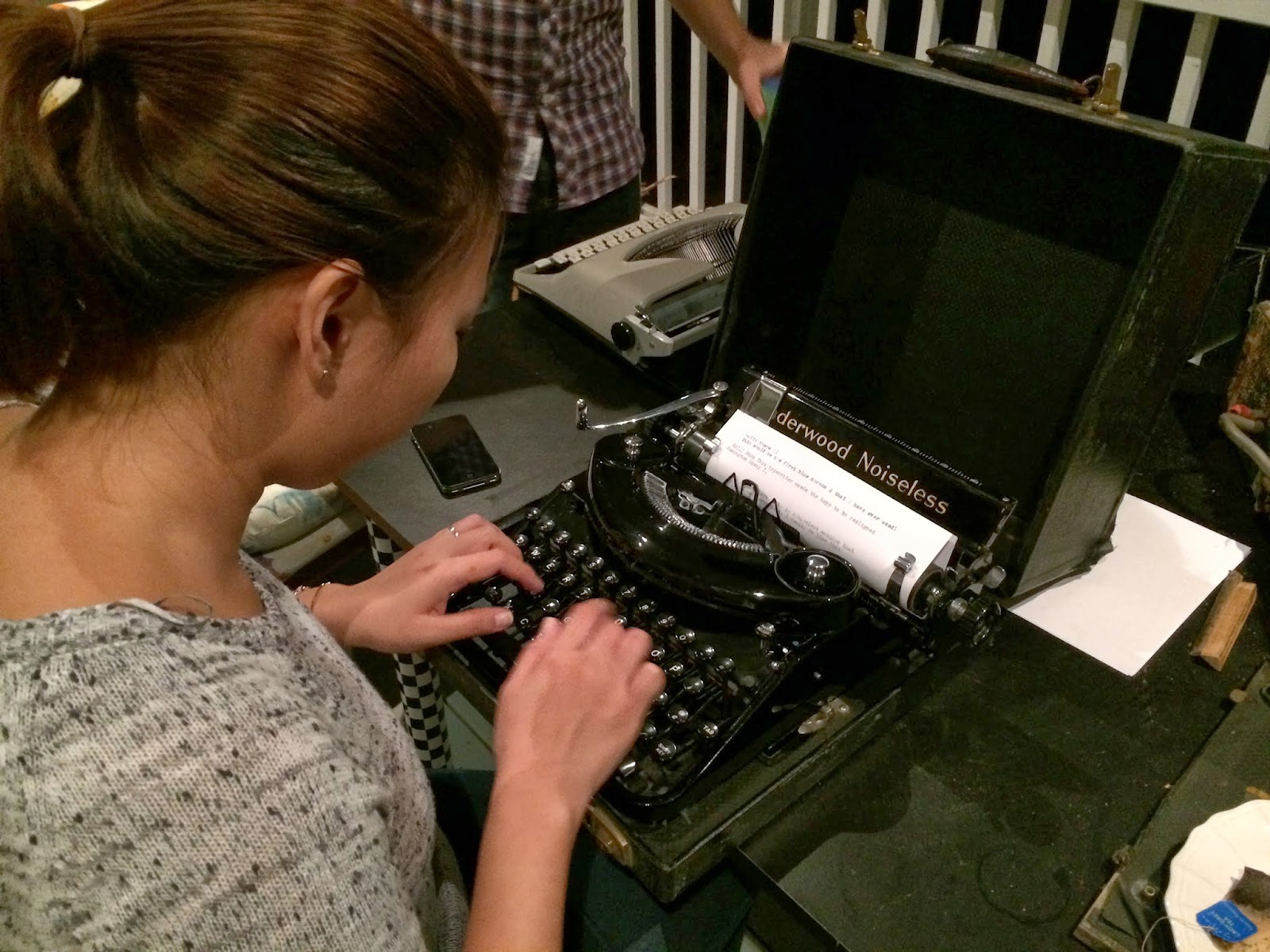 I think Natalie was in love with Steve's Noiseless!

So what can I say. A great night was had amongst friends and typewriter lovers and curious kids. It was lovely, and made for a great weekend.