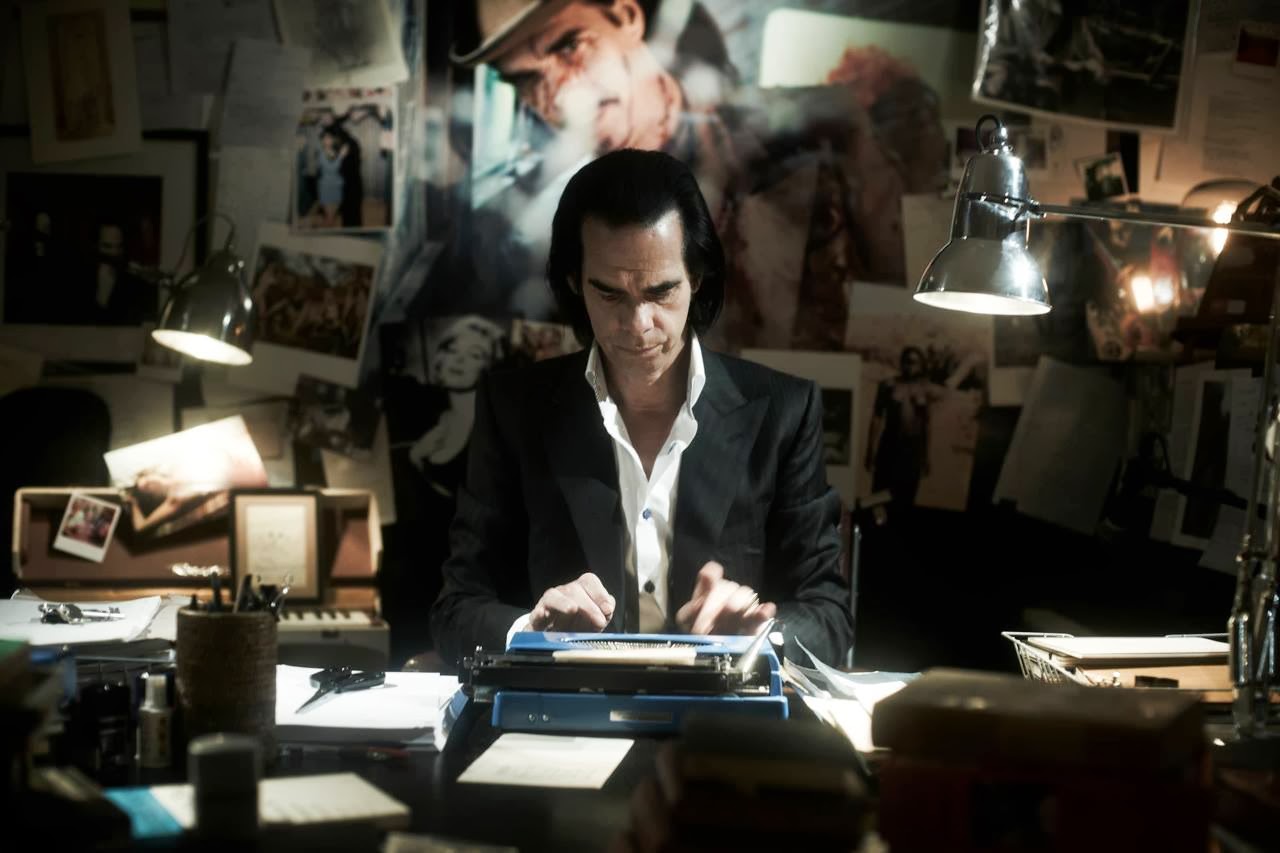 And Rob Messenger did:

" Hi Richard
Further to your comment on Scott’s blog post about Nick Cave.
Cave allowed his actual typewriter to be part of an exhibition here at the National Library in Canberra few years ago. The theme was writers and their working environments. I think I may have posted on it at the time, because I went along to check that the curators had Patrick White’s typewriter as an Optima, not an Olivetti.
Anyway, Cave’s typewriter is a grey Olivetti Lettera 25.
I hope this helps ...
Regards
RM   "

Rob was correct. After I wrote my blog I spent few minutes with Google and had uncovered a photo on another blog about Nick Cave's actual Lettera 25.

You can find the photo here

Cave's typewriter has occasionally turned up in songs and video clips for music with The Bad Seeds. Here's an excerpt from a song called "Hallelujah"

I'd given my nurse the weekend off

My meals were ill prepared

My typewriter had turned mute as a tomb

And my piano crouched in the corner of my room

With all its teeth bared

All its teeth bared.


And for those that missed it, the Lettera 25 actually made an appearance in the clip that I put up on my previous post. Have a look at what sits to the right hand side of this screen grab of Nick's desk.

Click to enlarge if you're having problems seeing it.

I can't help but feel that Nick's Lettera 25 is intentionally forsaken in a dark corner for a reason. A machine that has probably seen Nick at his keyboard for maybe thousands of hours as he belted out prose with a restrained passion.

Has he moved onto new things, while keeping old parts?

One of the best quotes that I found from Nick about using typewriters actually came up in a discussion about Nick having an iMac that he used to write his lyrics and works. It gives a great discussion about what is lost in the creative process in a digital workflow.

"Well, I got a computer in the late 90's and practically all of my note-making stopped. For some years I wrote my songs straight onto the computer, editing on the screen. This served me fine for a while, as I was attempting a more refined, simple, less chaotic form of song writing. But the down-side is that the whole journey to the final creation is lost and in many ways it is this stuff that is the heart and soul of the song. When I started working on the Grinderman record, I decided that I would forgo the computer altogether and write my stuff either in notebooks or on the typewriter. The great thing about a manual typewriter is that it is so time-consuming to change a line or a verse, as you have to type the whole thing over again and can't simply 'delete', that one develops a renewed respect for the written word. The other thing is that you never really lose anything. One problem with the computer is that you can sit down in front of something you have written in a particularly self-loathing mood and start hitting delete left, right and centre and stuff is consigned undeservedly to oblivion just because you're having a bad hair day. So, I'm back with the notebooks now. Nick Cave and the Bad Seeds' Dig, Lazarus, Dig!!! was written by hand, on paper and this album is absolute haemorrhaging of words a consequence -no delete button- and um, all is well in the garden."


As you probably noticed, Rob Messenger's response was directed at Richard Polt, who had wondered what typewriter Nick was using and was interested in adding it to his writers and their typewriters web page.

So this brings me to the point where I'm asking 'What of that mystery blue typewriter'? Is it Nick's new writing machine? Or is it something that was brought into the film to give some kind of cinematic punch. Or did the light grey L25 reflect too much light and make it hard to control the look of the shot, so they got hold of another - more portable machine. 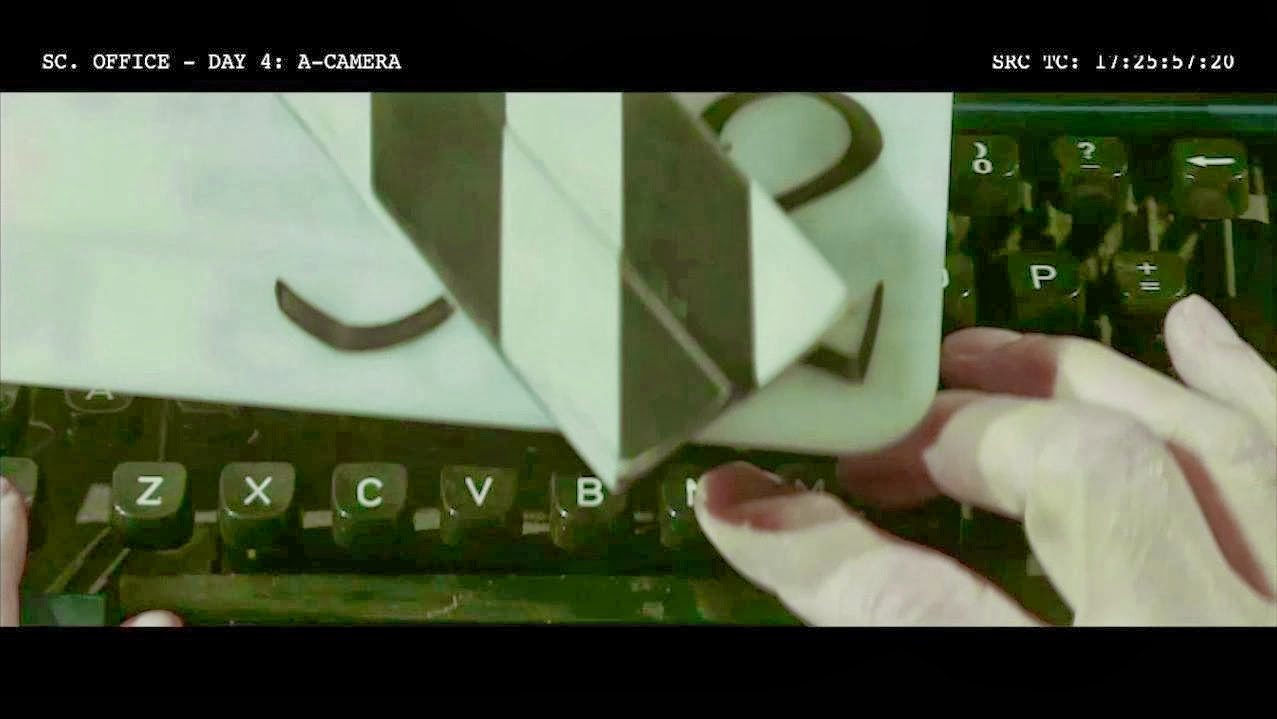 In answer to this question, I don't really know. Personally in my head I see Cave writing on a blood red German creation, or inky black and fierce early Remington or Underwood standard. It feels more like what I'd expect to see on Cave's desk. Or at least to me.

Instead, the typewriter in question is something a little more mundane. A Seiko Silver Reed Silverette II in blue.

I'm inclined to believe that this is Nick's own typewriter. It is a small but a solid performer while not being highly valuable and irreplaceable. This sounds like the prefect machine for travelling musician and writer. Hell, with that blue colour I'd be inclined to just take it with me travelling simply for the sex appeal.

Looking into Cave's typewriter usage has revealed some interesting observations about creative process, and the value of the by-products produced by this process which is sadly lacking in most digital workflows these days.