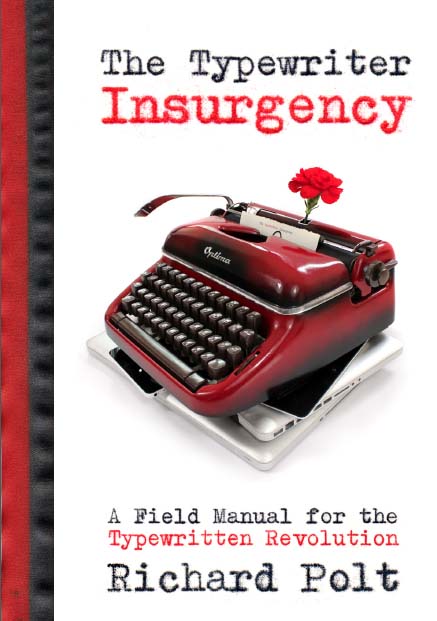 The cover - as proposed on Richard's blog.

Is it a book about typewriters? Or just writing.

Yeah, I admit it. I'm a typewriter collector. I intended to stop at 3, but then I found myself rescuing a glass key Royal portable from key choppers and it all went up-hill from there. The more blogs I read, the more I talked and met with enthusiasts, the more I found myself looking at online selling sites with eagerness.

And I collect for one person:- Myself. I both use my machines and appreciate them. So it is very important that they are highly functional and beautiful at the same time. These are the two key elements in my collecting criteria.

With that in mind I think it is time that I explain something that I said in the comments section of my blog a few months back.

"It probably doesn't surprise you that I'm not a subscriber of Etcetera".

Richard Polt - over at the Writing Ball blog edited the ETCetera early typewriter collectors publication for quite a while. I also understand that the publication has remained something that has been quite dear to his heart. The magazine is well written, well presented, and a great go-to for people who suddenly find themselves interested in Typewriter history.

So as a self-proclaimed collector, why aren't I a subscriber?

You know, I do love reading up on typewriter history. There's a lot of great and interesting stories of the yesteryear kind and the tales can be genuinely involving. But that history it isn't why I use or collect typewriters. I haven't bought Michael Adler's book for the same reason, along with a handful of other books about typewriter history. While they are all well written and interesting, I feel that too often they focus on this history being about bearded white guys inventing sh*t. Stuff which seems of largely no consequence about what I like about writing with and collecting typewriters.


There were roughly as many Olivetti Valentine typewriters made as Blickensderfer 8s. Which one is considered more collectable? *

In a phone call about a year ago, John Lavery made an interesting comment to me while we were talking about some of the other collectors attending Herman Price's get-together  'We'll never be in the same league as those guys' he said 'and I'm pretty happy with that'. I initially found this puzzling, as I can look around John's workshop and see some incredible pieces - a Glass sided Triumph, a Densmore, a couple of Blicks and Hammonds, a Remington 2 and one of the 15 known Visigraphs. If anyone has a right to claim his position in that league, I'd say it was him.

'Nah, I think I just like to repair them'. John said to qualify his statement. And with that I realised that John and I had far more in common than I did with many of the well-known collectors out there. It wasn't the chase of the rare or the weird that drove him or myself. It was something more... personal: it was what I did with the machines and what I visually loved about them. Just like John, I love fixing them - it is like solving a giant mechanical puzzle, much in the same way that I love to tinker with my car or motorbike. And like those two other big machines in my life, I also love using them.

My grandfather, the Remington typewriter mechanic lost the top digits of two fingers fidgeting with a chain on a motorbike (a Triumph, just for reference) when he was young. It certainly didn't stop him fixing typewriters long into a late retirement. Oddly this piece of history means more to me than Hess and Myers efforts to build the Royal typewriter factory.

I saw the plan for Richard's book last year, and I was intrigued to see that no-where on the plan was a deep exploration of the history of the typewriter. Bearded white-guys it seems, isn't on the menu - except for hipsters and... well, J.P. Huard and Mark Petersen, who currently use typewriters and are proudly bearded. My kinda guys!

These are people writing, repairing and loving typewriters in many different ways. They are a community, not a history. We tend to look at typewriters as historical pieces. But they are alive and kicking - and on my damn desk! This, it appears, is what Richard's book is about.

Richard explores a lot of the typosphere, and is very passionate about it. He's a very smart chap - he's not 'Professor Richard Polt' because he likes shoving that title in front of his name. So his book is likely to be a very well thought out exploration of the community. And this is something that genuinely interests me.

I still think there's a lot of history out there that isn't really covered or taken seriously, such as the women of the typing pools, the mechanics and their stories, the sales men and women and of course - the writers. It is those histories that I am personally far more interested in than the 'bearded white men inventing sh*t' history. Those neglected stories are that has flowed on to make the enthusiast community what it is today.

Richard's book may not be broadly culturally ground-breaking stuff, but it is a big step in a different direction on a subject that has a lot more culture to it than we currently recognise. I see it as piece of literature that is far more accessible to the casual enthusiast that makes up the larger community, than yet another publication for the devoted niche collector with big money tied up in machines that are never used.

So, hurry up and publish already! 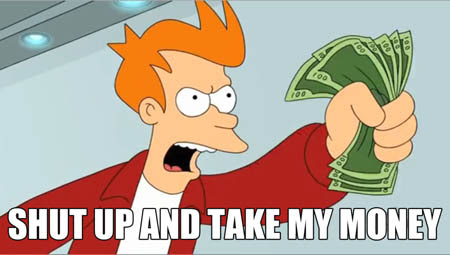