The universe is balanced with a Hermes 3000

I now officially have a folly, as I collected the 'Jewellery' destined Royal this afternoon in circumstances that are fitting of it's own blog entry.

It hasn't been the best day. A work function at a restaurant in Hamilton last night ended up with a lot of co-workers with a case of the 'runs'. A situation that I myself had not been spared from.

After collecting the Royal on the way home from work, I arrived home to find a big white package on my doorstep. It undoubtably contained a bit white typewriter. 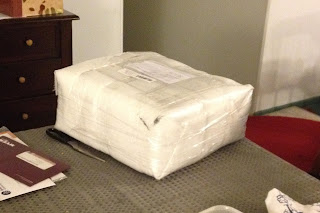 I carried it upstairs in one hand, with the black Royal in the other. The irony of this Yin Yang situation wasn't lost on me... Indeed, the Yin Yang would perfectly represent my excitement and disappointment. 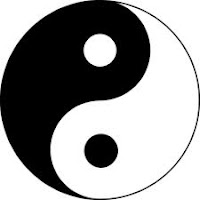 So I plopped the white package on the table, and promptly pottered off to the nearest toilet before heading to bed. The Royal ended up on the floor near my desk.

Before I continue, I need to detail something for the non typosphere readers on this blog, so they can understand my excitement about this package. There's a model of typewriter known as the 'Hermes 3000'. These are a Swiss made typewriter, which generally has a reputation of being the epitome  of refinement of typewriter design and construction. There's plenty of people that may disagree, but the vast majority of users believe that these machines have a superior typing action and reliability to all other typewriters that competed against it on the market.

They are also typically incredibly expensive to buy on online. Especially the 1950's early 60's versions with the beautiful green colours and unique curves.

I woke up sometime after the sun went down, and tiptoed out to the lounge. It was like Christmas.... I was eagerly wanting to rip the packaging open and get into the goodies inside. 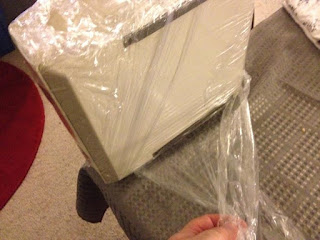 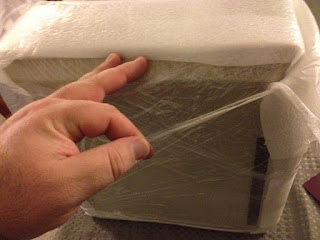 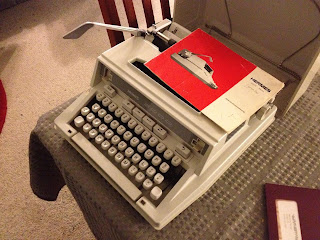 And there it was... A gleaming example of a 1972 (yes, I've checked the serial) Hermes 3000. Sure, it's not the metal beauty of yesteryear. But from what I've read this machine is mechanically the same, if not better than the venerated 50's version.

But there's something different about this machine. A little bit of 'special' that made this machine all the more interesting to me.

The seller on ebay was just a clearing house of - what I suspect is - deceased estate goods. The typewriter was extensively photographed in its advertisement, but was low on details. I won the auction for it on the same day as the folly Royal, and after postage, this machine came out to roughly the same price as the Royal. An underpayment in my opinion, balancing out the overpayment of my folly. Universal harmony still clearly at work.

But let's get back to the 'something special' about the Hermes. I spotted it while looking at the photographs. First, I noticed that the Manual had only german text on the front. It wasn't until after I looked at the ad a bit longer, that I noticed something about the keyboard. 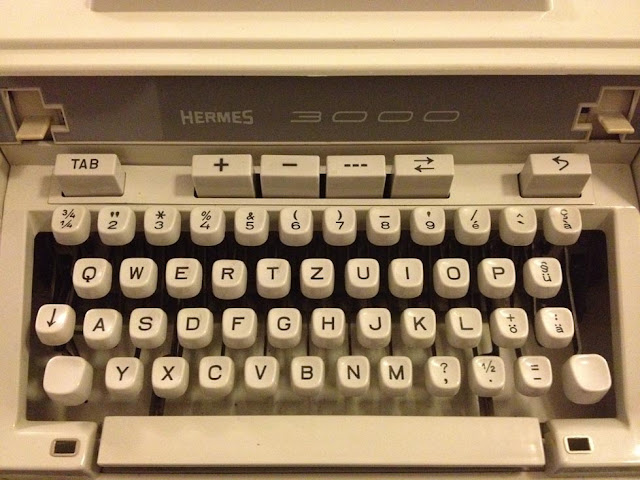 The typospherians will see it straight away, but I will point this out to the more casual readers of my blog:
I'm sure everyone is familiar with a 'QWERTY' keyboard and why it is called as such. So see if you can form the same word out of this keyboard.

Uh huh... That's right... It's a QWERTZ keyboard. See all those extra characters on the keys to the right?

This is a German keyboard (EDIT: SWISS Keyboard. I did think it was a Swiss at first, but discounted it on the basis of the name of the owner alone). But outside of units brought in by collectors to Australia, these are typically thin on the ground here. Very thin.

The owner also had a label stuck onto the side of the keyboard that contained their initials, and their last name and address. Tannenbaum was their last name.

This typewriter was a piece of migrant history. I'm fascinated in migrant history, and to be honest this was even more exciting to me than getting my hands on a Hermes 3000. Did it come with someone that had moved from overseas? Was it brought here for someone who was stubbornly still working with german keyboards?

And now here it was. In front of me, ready to be used. It's most recent service receipt (1998) was stapled into the cover of the manual. The service was for a screw that had dropped from somewhere into the typewriter.

I tried to put a piece of paper into the typewriter, but the platen knob just kept turning freely. It turned out that the knob was missing a screw. 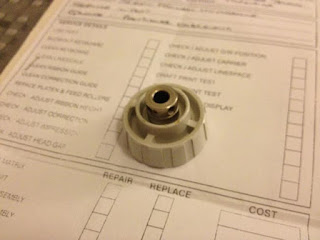 The rest of the typewriter was perfectly intact and in mostly brilliant condition. The mechanism to drive carriage was smooth and tight. The carriage lever was a quality construction, and the whole unit operated and felt like it was brand new.

I paused... I thought for a moment... Am I about to be severely disappointed by the action when I press this key? Am I about to find out that everyone's ranting and raving was just... utter bullish*t?

I pressed a key. It responded nicely. No sticking, no resistance. I felt a slight ratcheting of the action that I had never felt in a key press before. It felt good... but I wasn't having a typewriter orgasm over it as it sounds like others have.

So I decided I'd use the ancient  ribbon that was in this machine, and give it a go.

After a minute of typing on it, I could already see why it had such a good reputation. I have two other machines of it's era; An Adler Gabrielle 25, and a Adler Tippa. It didn't jar my fingers like the Gabrielle has, while it felt far more refined and controlled than that of the Tippa.

The German keyboard wasn't even a problem either. I had no problems navigating my brain around using the re-orientated z-y keys.

If I am to fault this machine for anything, it's the noise. It's sharp, smooth and direct. And louder than anything else I have, except maybe my 1936 Remington 16.

There's no comparison to the other machines I have. The only machines that come close are the two massive standards that I own. If the 1950's Hermes 3000 typed as nicely as this, then it certainly would have been a revelation to the industry at the time.

But despite this unit largely looking almost brand new, and very carefully looked after, there were some blights that indicated that it had been used extensively, if not badly.

The rim of the ribbon cover was smattered with blue residue. As was the paper table. I chipped at it with a fingernail, only to find that it refused to budge, and seemed to be well and truly caked on. I couldn't identify it either. It was in places that ink wouldn't typically be.

Further more, there had clearly been a capricious use of 'Liquid paper' (Lickie for my local friends) in the past, certainly taken straight from the liquid paper bottle with a brush. 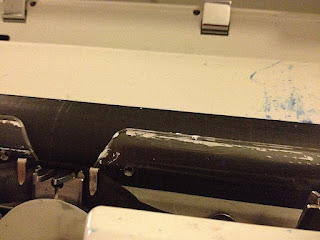 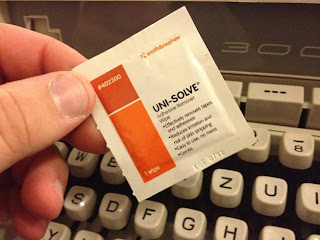 Time to break out the Uni-solve.... 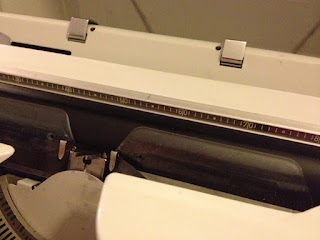 So after a bit of cleaning, this whole typewriter now looks new again. The liquid paper was quite difficult, as while I cleaned it, the small lines seem to multiply, and soon I had huge smears of thick lickie all over the place. It took me a good 15 minutes just to clean up my clean up. 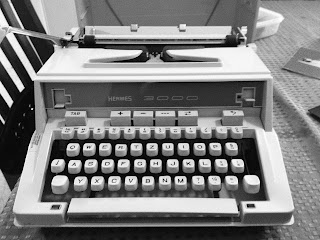 I don't actually mind the style of the design here. It's just has historic as many other setups. This 'The computer age has arrived' look has a charm of it's own, which has yet to come into it's time. The dull aluminium and white colour scheme certainly sits alright with my mac, but had I have ended up with a white and blue unit, I would have been just as happy, as the blue really repeats that blue steel look of the computers of the era.

Unfortunately, other than my Mac, this typer matches nothing else of my decor, which is largely 1920s/30s/40s Deco. Much of it being restored or reworked pieces.

So there you have it. I'm going to put a new ribbon on this sometime in the next few days, and possibly knock out some correspondence to someone on it. Anyone else wish to be added to my letter writing list? I wrote a letter 2 nights ago to a new contact in the USA, and I grabbed a handful of airmail envelopes yesterday so I can post overseas. So don't be shy.

Anyhow... I really need to get project FP finished. It's had a bit of a setback after some materials failed me. And now I have another Royal that is going to take some work. The projects are stacking up. It's nice to have a typer that only needs one small screw to get working 100% again. 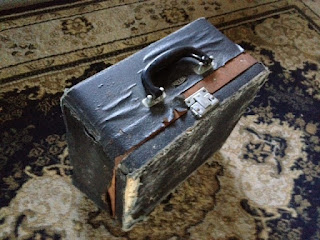