Why I don't smoke

I'll be talking a little more about these two typewriters sometime in the near future, but right now I want to talk about my most recent attempt at dunking typewriters. You may recall that I successfully attempted a dunking on a Hermes 3000 70's model a little while ago. Since then I have dunked a few more typers with mostly positive outcomes. Until today. Here's a moment I'd like to share with you.


Okay kids, hop in the bath and play nicely... 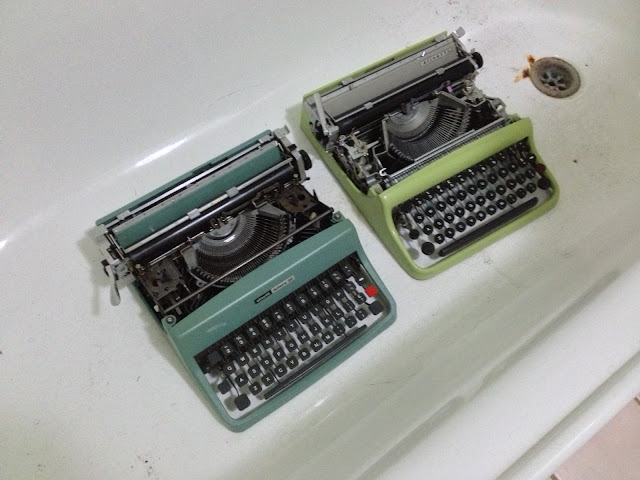 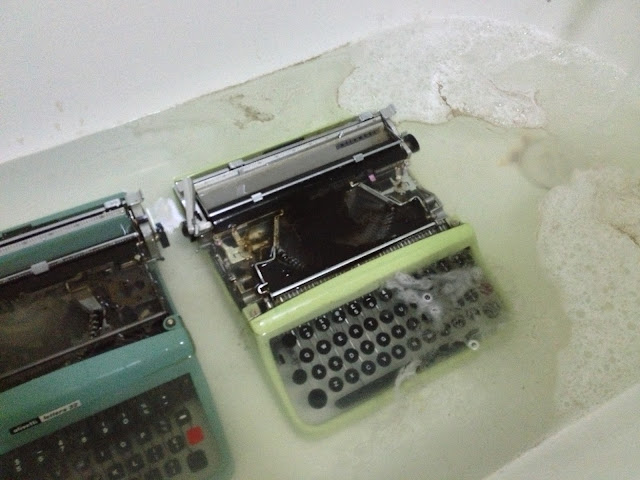 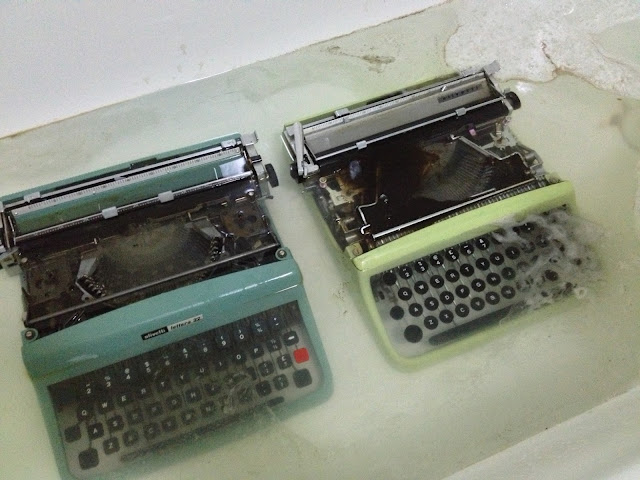 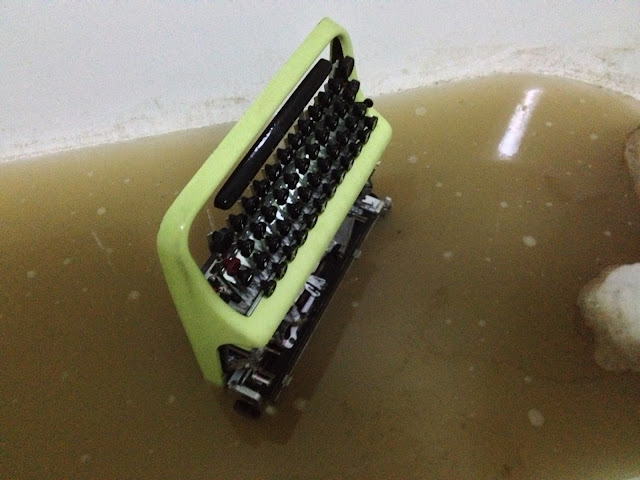 Damn. I hate it when the kids poo in the bath.

The lettera 22 was in remarkably good condition when I bought it on eBay. The case was excellent for the age of the machine, and the paint had no wear. All the metal parts still gleamed as though they were  new. For a machine that is approaching 50 years old, I thought I had scored.

I'd seen these machines before, and when I saw it on ebay - lonely and with no bids (they had spelled typewriter wrong) I threw an offer in, and was surprise to have won the auction. The machine LOOKED in excellent condition in the photos.

When It arrived, I looked over it an was mostly pleased. But it seemed a little off colour from the version of this machine I had seem previously. The green didn't quite pop out as nicely, but the paint still looked unworn, with the exception of a very light scratch - which would probably 'buff out'.

Never mind, I thought as I gave it a bit of a tap on the keys. This is when I discovered that a handful of the typebars were a little lazy. A sign that there was some dirt, oil or something else in the segment. I thought about just trying to work the segment clean, until I also noticed what seemed to be thin film of ink smudged down the side of the typewriter.

I was going to dunk a Lettera 32, so I decided I would just put the Lettera 22 into the bath with it, and just let the hot and soapy water shift a bit of the residual junk. Neither machine seemed particularly dirty, and I was pretty confident I wouldn't be transferring dirt from one to the other.

The first hint I had of there being something wrong was the smell. I knew the smell, and I couldn't quite place it at first. As the water level raised in the bath, I also noticed something else: a pool of  black residue at the bottom of the segment.

The pool grew a little, but kind of just kind of drifted around in the water.

But then the pool became a rapid squirt or material rising from the bottom, and the Lettera 22 filled with an oily black/brown murk. I knew any second now it would overflow from the L22, and I reached in and snatched out the L32 to save it.

As the body of water shifted with the removal of the L32, the L22's black oil dispersed across the bath with almost impossible speed. It practically exploded its supply of filth into the water and I was now left with tub filled with an oily brown muck. It was like an octopus had defensively shoot its ink.

I quickly turned off the tap, and in a moments peace memories related to the smell came back to me. Both of my parents had been heavy smokers once, and the smell of nicotine often soaked into everything. Also, in my younger student years, I had often rented dumpy old houses - many of which had walls toned brown by nicotine stains from the previous heavy smoking occupants. I still have the trauma of trying to wash that oil off the walls.

The Lettera 22 has several patches of noise reduction foam or felt. The inky black squirt was a result of those patches releasing the load of nicotine that had been stored in them. The nicotine had come out due to the flood of hot and soapy water that was now invading into the felt - loosening up the oil.

The moment the hot water hit the paint on the Lettera, it transformed the colour of the machine. A thin layer of nicotine had coated the machine perfectly, and this layer now dissolved rapidly into the hot and soapy water that splashed over it. You can see the residue in the photos above - where it sits in a ring around the soap suds.

Ultimately the patients responded well to treatment. I flushed both of the machines with hot hot water straight from my shower, and managed to move most of the slick from the L22. I ended up having to shift a bit more with some wipes and cotton buds later on.

The bath however, was horrendous. It took me over an hour to scrub clean. I was soaked thick with oil on my skin, and I felt 'chilled'. I wasn't exactly stressed, or even in a hurry to get myself clean. I would have expected the nicotine particles to have oxidised and degraded over time, but I guess there was enough fresh material for it to soak in to my skin somehow. *Future note - wear long gloves when dealing with old typewriters.

Both machines now work perfectly, and I'll be posting about them soon. I've seen a fair bit of discussion on the forums about the L32/L22 differences, and it is nice to have both machines side by side to have a good go at both.

Just a quick but ernest note (smokers, you might want to turn away for a moment).

I used to work in a children's oncology ward where I learned to cope with the personal difficulties that come from watching children potentially dying every day. I was often witness to families breaking down while others only held together with increasingly strained strands of hope. We did our best for the children and families, and in 40% of cases, it wasn't enough for the children.

The links between smoking and cancer are not just theoretical, they are real. My father is still alive and stopped smoking 20 years ago. 2 years ago he was diagnosed with emphysema. The muck that came out of this typewriter really highlighted the pervasive and damaging level of the materials that you consume from smoking. And it really drives home the poor outcomes that come from cancer. As much as I love the romantic notion of a room filled with smoke, with the ashtray over-flowing while the writer pounds at the keyboard of this Lettera 22 creating a masterpiece - I just can't move myself away from the grief that is caused by cancer. A cancer that most believe that they are unlikely to ever suffer, until they have it.

Sorry to bring down the tone. I promise I'll end the next post much more light heartedly.
Posted by Scott K at 18:41