The Facit that got away.

I like to think of myself as a seasoned ebayer. Or - epay-er, depending on how heavily stung you've been by the supposedly 'cheap' sales you find on there.

I have about 460 battle-scars next to my user name, so I've spent a bit of time and probably too much money on the site. I've managed to snatch a fairly solid collection of typers from there too. So I have to say, outside of the over-pricing of many items I have chased, I've usually enjoyed the thrill of the bid, and whatever may or may have not come my way from it.

But - oh, dear readers... As you well know, things on ebay can from time to time go a little bit askew. I've to this date not had something arrive in irretrievably damaged-via-post condition, but I have had plenty of seller negotiation hassles.

It was towards the end of last year, when everything was going to poo at work, that I spotted an interesting machine that I thought could make for a challenging project. It was a Facit 1620, and it looked in poor condition. It had probably been stored badly.

Quite possibly on a shelf in an elephant's butt. 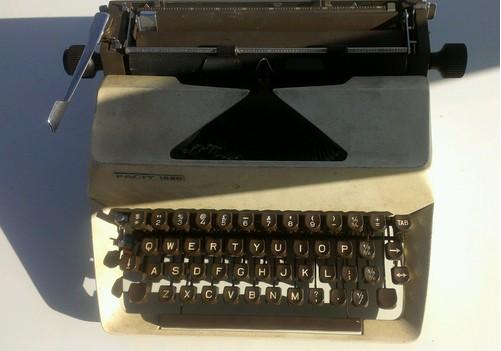 The Facit machines interest me with their bar and bearing rails and unusual mechanics. I had heard so much about these, and I was eager to get my hands on one and muck around with it. However this machine looked like it has been pulled out of the elephant's dung-heap, post poop. And considering where it had come from I'd dare say it had been treated equally as poorly.

The seller was located in Rosebud, a bay-side town/suburb that was about an hour or so drive south east of Melbourne's CBD. Rosebud used to be one of those places where suburbanite Melbournians used to own a quaint little holiday hut, and would spend the hot Christmas holidays locked up in this  there, boring their kids witless. But witlessly near the bay-side beach none the less.

To get to Rosebud, you must pass through Frankston. Or, as it is more commonly known - Franger.

Incidentally, Franger is also a common slang word for a condom. And you often feel you need protection while you're gracing the suburb.

I moved out of Melbourne nearly 9 years ago now, and Frankston may have changed a lot since. But before I left, it was the kind of place where everyone knew your name. They knew it because they probably had your license and credit cards, which they had so deftly snatched from you while walking down the street. You could usually get your wallet back easily in Frankston though - just as long as you gave chase. It would end up in someone else's yard about 200 meters away - now missing any money that was once in there.

If you knew where all the dope dealers were, you could just simply run that direction and probably catch up to the person quite quickly. I was always amazed at how fast a junkie could clear out a wallet. With fingers that fast, they would make an excellent typist.

Don"t get me wrong. Frankston is not a ghetto, like - say, the delightfully named suburb of Sunshine. It was just a chunk of middle class Melbourne that was camped by the beach and semi-isolated from the rest of the city.

It's just that... it has developed a bit of a culture that is a mix of 'Home and Away' (dodgy Australian beach-side teen melodrama) and any of the Cheech and Chong movies you can think of.

It was cheap to buy and live there.

But slowly developers have moved into beach-side Frankston, and started pricing the middle-class bogans out of the area during the attempted process of 'gentrification'. So they moved further along the bay to places like Rosebud and Mornington.

The description on the item was utterly useless. I emailed the seller to get information, but I got no reply. I emailed them to ask if they would mail the typewriter as I was two states away in Queensland, and got an "if you pay". And yes, with no capitalization or punctuation, as the only answer.

I should have said no to myself. But I replied and said "Of course! just let me know the cost. I'll be bidding", and then bid a punitive $11. I won of course, at $10, and then emailed the seller. The response was short:

"selling for a mate ill give you his number and you can call and sort it out".

The number followed, and I suddenly felt my stomach drop. I knew this was going to be a problem it is always a problem when you're trying to sort this kind of sale out. No one knows who to send the money to. Someone who hasn't been involved in the sale often suddenly has more conditions that they want to throw into the fray. It always ends with a bit of a strain. And worse, this guy was in Mornington.

I didn't call that night, or the next day for that matter. In the interim my attention had shifted to the debacle that was going on at work. But I did eventually find some time to call while I was waiting outside the dentist one afternoon.

"Ha-louw" the seller answered the phone.
"Heya. My name's Scott. I'm calling from Bris and I wanna organize getting that typewriter posted that I won from you on ebay"

He had a voice that sounded like they ware talking or yelling through a cloud of gyprock dust on a building site. He had that accent and tone that you get from shonky tradesmen that have a "they can get fu*ked" answer to everything that they've done wrong. The kind of guy that has his radio glued to triple-m radio, and thinks tripple-m 'rocks' because of the amount of Nickleback they play, and their tendency to slam out AC/DC at least once a day.. The kind of tradesman that quality builders and other real tradies don't like to associate with, for fear of being seen as part of a conspiracy of shonky workers. Too much testosterone, and too used to telling people to "fu*k off" whenever someone has tried to hold them responsible for something they screwed up because they were so lazy to do the job right. Usually because they've been thinking about something they saw in 'Picture magazine'.

I used to deal with these guys on a daily basis when I worked for an Air conditioning company. I was even once hired - albeit briefly before they outsourced the department to India, by an Australian telephone company to be a mediator between customers and tradesmen. And I knew I wasn't going to like what was about to happen.

"but I...." I started to protest, before being cut off.
"Look mate, you're a fu*kin' dickhead. I don't have time for this sh*t. I've got a family. I've got kids. Do you think I've got fu*kin' time to take this sh*t to the post office. If you want it, come and get it. I just put it on ebay to see what I could get for it. But I was just going to send it to the tip. I'll just chuck it. You can have it for nothing, just fu*kin' pick it up"

Slowly I was trying to figure out exactly what was going on. My guess was that the seller hadn't even consulted the owner about posting it with anyone, and just half-wittedly answered my email. On the other hand, the owner - like so many other of the people I come across selling these machines, had in mind that it would be potentially a priceless collectable, and thought he'd see if he could make his fortune.

I thanked him for his time, to which he replied "Fu*k it. I'll leave it at my mates place. You can sort it out with him".
"Great. See ya later" I replied, before I ended the phone call.

To be fair it was a week before Christmas, and it is a very busy family time. But really, guys like this usually turn the situation around to the aggrieved party and blame them instead of taking responsibility for their own stuff-ups and laziness. Calling me a dickhead was the point of transition where he's turned it around in his own head, and self-justified that I was at fault for his and his mate's laziness and inability to communicate effectively.

In situations like these, I'd usually call the person back about an hour later. Instead of saying hello, I would launch straight into the discussion about what I intended them to do, before their brains had time to figure out how to respond. I'd usually have an exacting plan thought out about how I would achieve this, and have figured out a simple and easy approach that I would just walk them through in 20 words or less, and make it sound like it was going to be 2 minutes work for them - and they'd walk away feeling like rich millionaires.

But no. Not on this occasion. I just sat back in the car seat and sighed. A $10, potentially rust-filled machine wasn't worth my time. Most of the machines I've repaired probably aren't - but to fight with someone for it? I'd want it to be something like a Blick.

I do know people in the area I could have called to pick it up. But I could never rely on them. They're the sort that I'd end up politely calling once a week for 6 weeks because they haven't collected it - before they put a post up on their facebook - something like "I can't believe it! You do someone a favor and they show their appreciating by nagging you constantly! They can get fu*ked if they want anything done for them", having never actually done the favor. And I'd just find myself getting angry at the responses from their friends replying "You tell those ungrateful bastards" or "People these days are so selfish, and only think about themselves".

I've seen them do it before. I'm not just being cynical. The closest person I could rely on was about and hour and a half drive away.

It is probably in the tip now buried under soiled mattresses, half eaten food and worn out clone Nike shoes and rubber thongs. I feel bad about it. But sometimes you just have to move on. I thought to myself that this doesn't happen very often, and I shouldn't get despondent - and this would be a one off.

So, in January I bid on - and won an Auction for a Royal  Royalite 120 located in Brisbane.  Surely nothing could go wrong with buying a local machine?