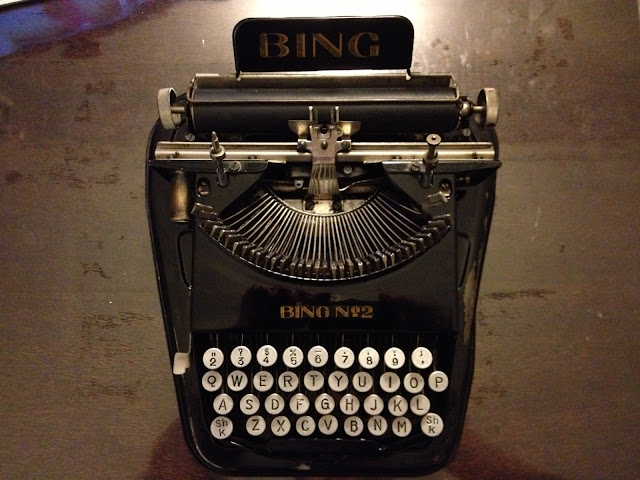 You may recall that a little while ago I got a 'Bing' typewriter off John. The machine was beaten, battered and bent. It was also missing some fairly rather crucial parts - namely all three bearings from the carriage. To all intents and purposes this machine had largely had its day.

I could have shoved a few pins of dowel into the carriage and left it as a display piece. But that  felt like giving up can copping out. The trouble was, that I just simply didn't have the bearings to place back in. Nor did I have any information on the size of bearings that I would need - a pretty important piece of information, as you couldn't just simply 'guess' the size.

I also really, really wanted a working Bing. I've largely decided that I want a collection of Art Deco era machines, and the Bing was an excellent example of Art Deco and early Bauhaus influenced design. 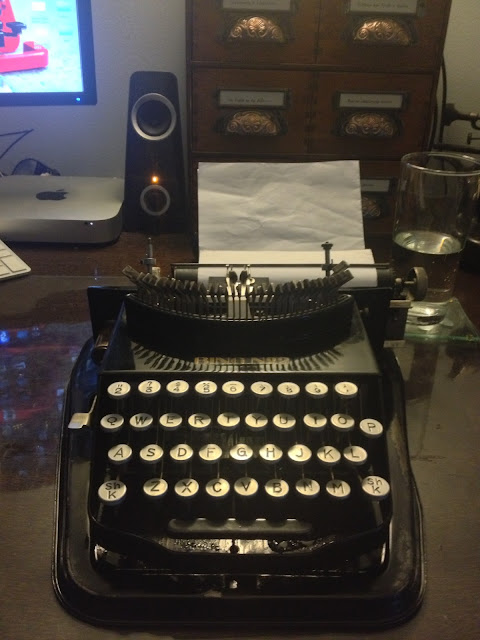 So... I set to work. I dropped in a couple of bearings that I had hanging around from the Valentine project, and found them to be way too small. But I looked at the wear marks on the tracks of the old bearings, and got a rough idea of how much larger the original bearings were.

I took a few measurements, and a few more measurements and did a few calculations. I didn't have the ideal equipment to get the best measurements (remember, when it comes to bearings, you need to be able to get the sizes right to mere 10ths of a millimeter) so I was just kind of winging it.

Once I had estimated the size, I sourced a handful of bearings from the engineering shop. I got 4 of a size that was as close as possible to my estimation, 4 of the next available size larger, and 4 of the closest size smaller.

I needn't have bothered. It turns out that my estimation was correct, and the first size was right. I estimated 7.3mm, and the closest I could find was 7.14. The bearings were a touch under-tolerance for the machine once installed, as confirmed that my 7.3 estimation was pretty much right.

So now I had the bearings, and a bit of a phobia of putting them in. I still vividly recall the nightmare of trying to get the Valentine's bearings back in, and I expected this machine to be just as difficult.

But it wasn't so. With 15 minutes of thinking and planning, and 2 minutes of doing, I had the bearings perfectly lined into the typewriter. I breathed a sigh of relief then filled the tracks with lubricant, and started to work the lubricant in by moving the carriage back and forth.

The draw band needed to be replaced as well. This stupidly took even longer than the bearings to did, largely because of the unusual mainspring. I produced a new band out of 60lb fishing line, and soon everything was working (sort of) as it should. There's some pushing and prodding to do yet, but once again the typewriter was back to life, and mostly operating. 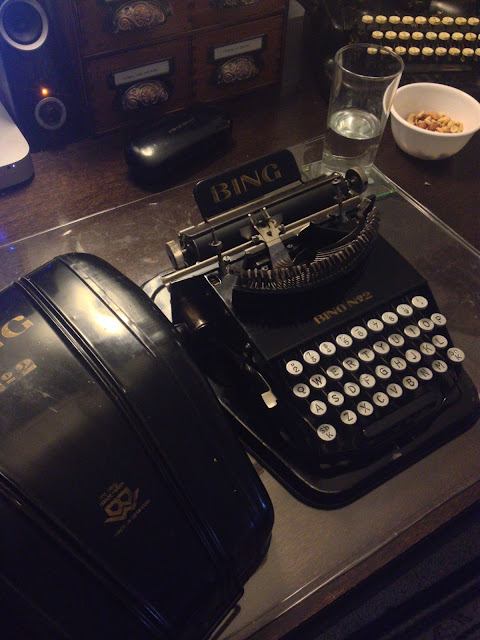 The aluminum keys are actually quite beautiful, and unique, and I don't know of any other typewriter that has anything like them. The action on the keys is also quite snappy - and it certainly gives a hell of a thump against the platen. But that wasn't the end of what is unique about the design of this typewriter. As I inspected it closely, I found this typeface: 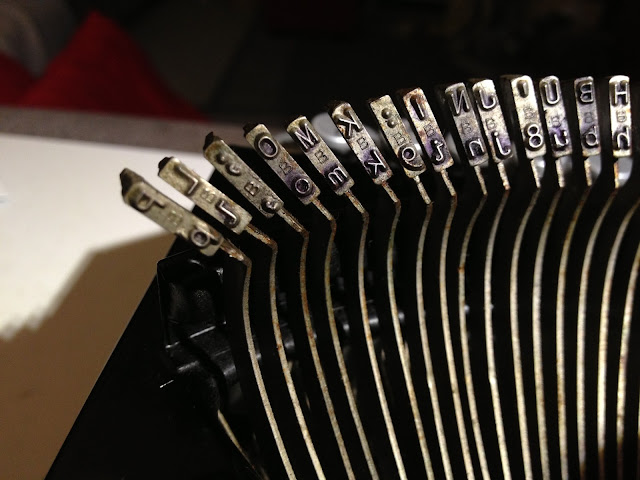 I saw Ton's write up on the Bing some time ago, which contains an interesting example of the typeface. The typeface looks largely the same as my bing, but it isn't. Actually, there's some significant and subtle differences that gives a nod at the Bauhaus influence of the design. Can't see it? Have a look at the 'i', and then the lower case 'L'. Compare it to Ton's example when you have a moment.


I don't have a ribbon that will fit this typewriter, as it is a 10mm ribbon, - or maybe even an 8mm. But I shoved into the carriage a folded scrap of paper, and stuffed an old and somewhat dried ribbon between the prongs of the ribbon non-vibrator (it doesn't move... ever) to try and squeeze a sample out of this machine. 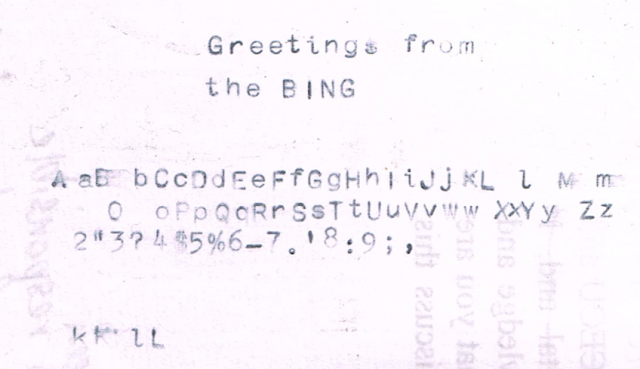 For now... I call this typeface 'Fat Vogue', until someone gives me an idea of its actual name.

This machine still needs a bit of adjusting and problem solving, but this sample gives you an idea of the structure of the typeface.

The Bing is never going to be someone's primary writing machine. It doesn't have any margin settings, it doesn't have a carriage lever, and it doesn't have a bell... That's right, this Bing has no 'bing'. But it isn't an awful typewriter either, and while many consider it a toy it really is a simple and low-cost typewriter that was made in an era when Germany was suffering severe financial and social problems.

The original idea of Bauhaus design was to bring art and functionality to the wider community in an affordable way. This principal is very much in the spirit of the design of the Bing, and defines its character. Some people see it as a unique machine, while others see it as a bit of an oddity.

This machine has quite a way to go before it again is a fully functioning typewriter. Its got some dings that need to be bent out, and some bits and pieces that need to be fixed and adjusted. But getting the bearings in, and finding the typewriter is largely working is a major step in that direction.

Now... time to fire up the CAD software again, and design a 3D printable set of replacement spools.

And again, a sincere thank-you to John for this marvelous typewriter.
Posted by Scott K at 02:30