I got a phone call from Steve K (writelephant) about 10:30 telling me that he'd managed to acquire one of the covered park benches at the park. This was fortunate as the section directly under the bridge that I wanted to use was sadly off-limits. They had done some grass replacement there.

So when Natalie (NatsLapTaps) and I got to the park, we grabbed the two tables that I brought with me, and quickly tried to set up under the cover before anyone else tried to push us off the table. The park was filling fast with picnic attendees, and covered space was becoming quite sought after. 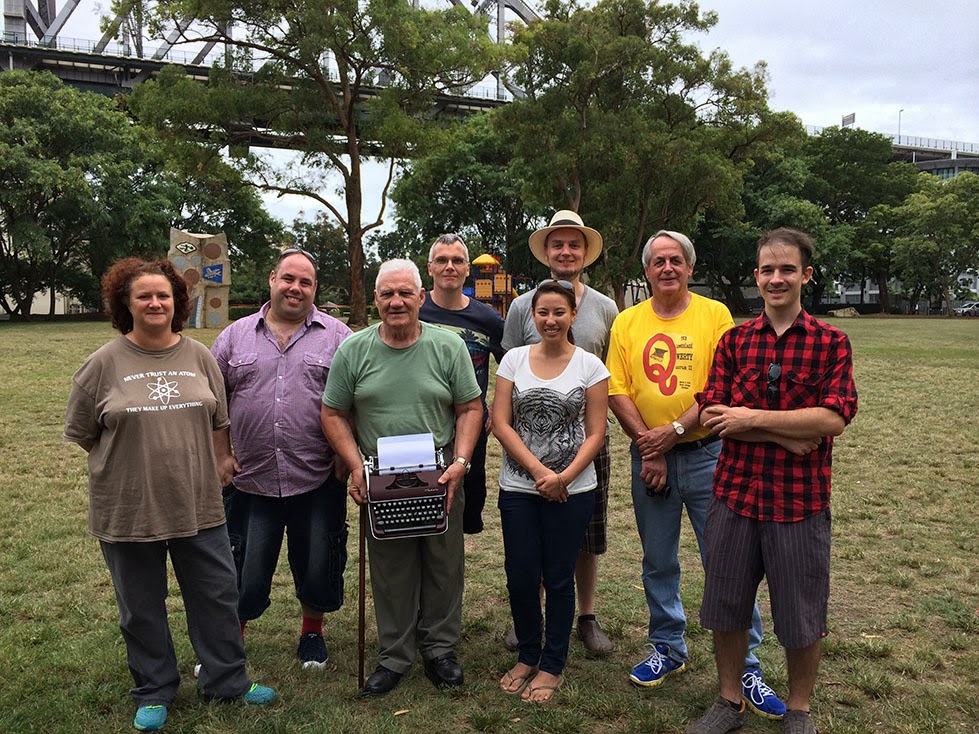 Everyone seemed to arrive in very quick succession after 11 o'clock, and once again I was enjoying the company of a group of really great people. John (McTaggart's workshop) was technical as usual, and Rob (OzTypewriter) was passionate about the history. Natalie was exploring and just enjoying the company, while Louise was being her usual witty self. Rino (Long, slow blog)and Steve K got their hands on as many writing machines as they could to see how they typed, and Steve Snow (Impatient Typewriter Mechanic) was right there with them. 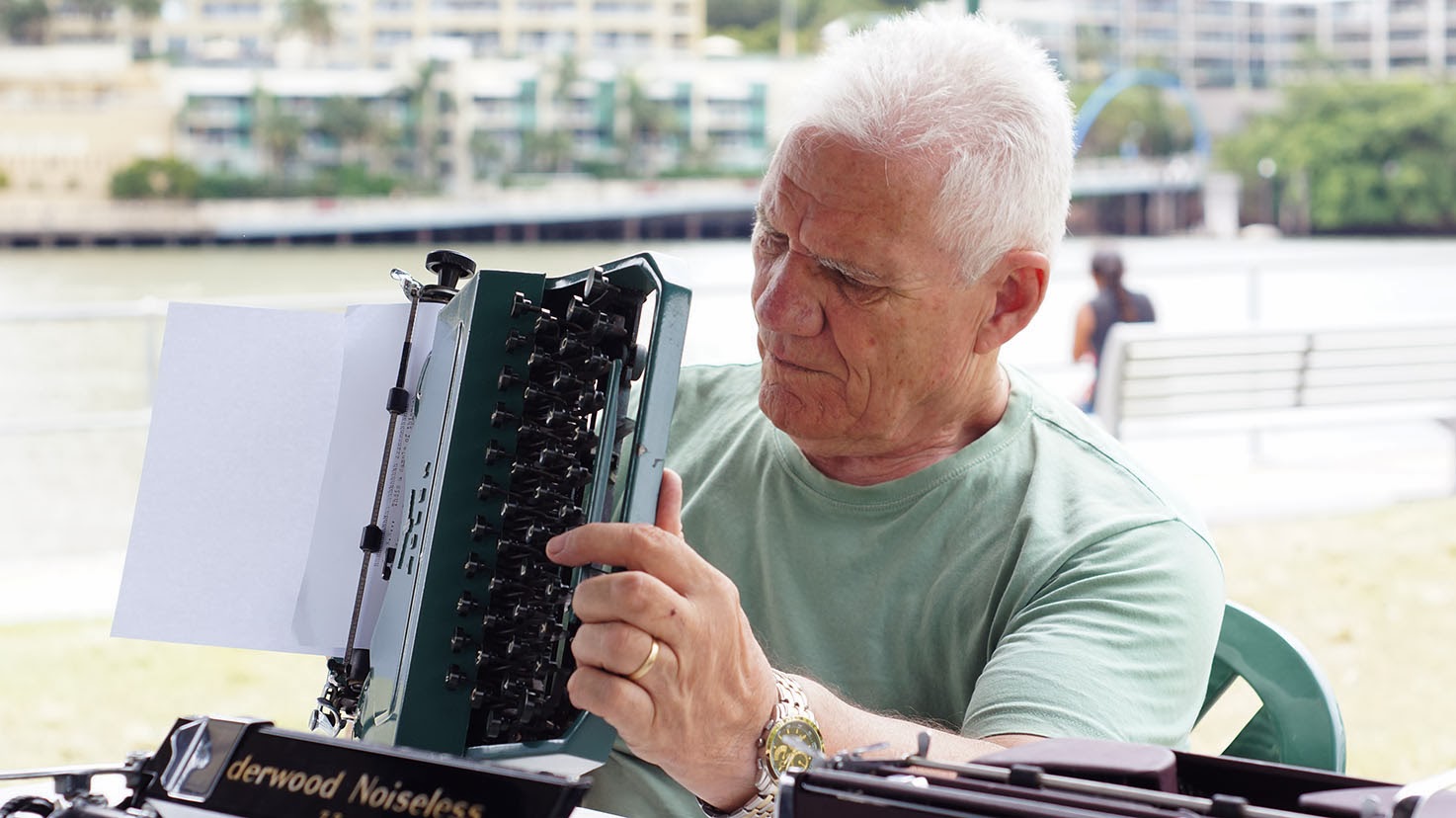 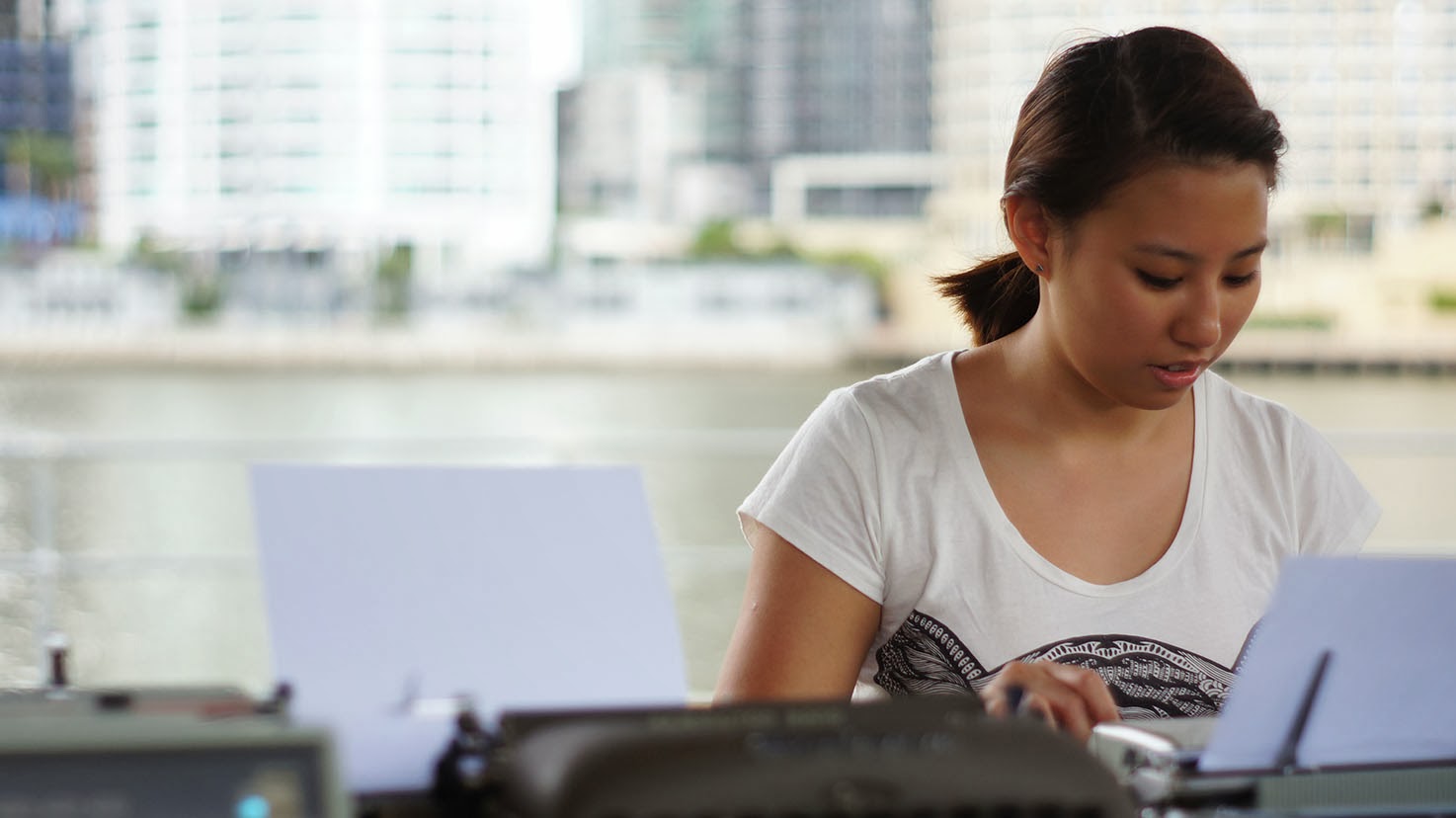 Natalie was enjoying writing on one the invading Lettera 22's. 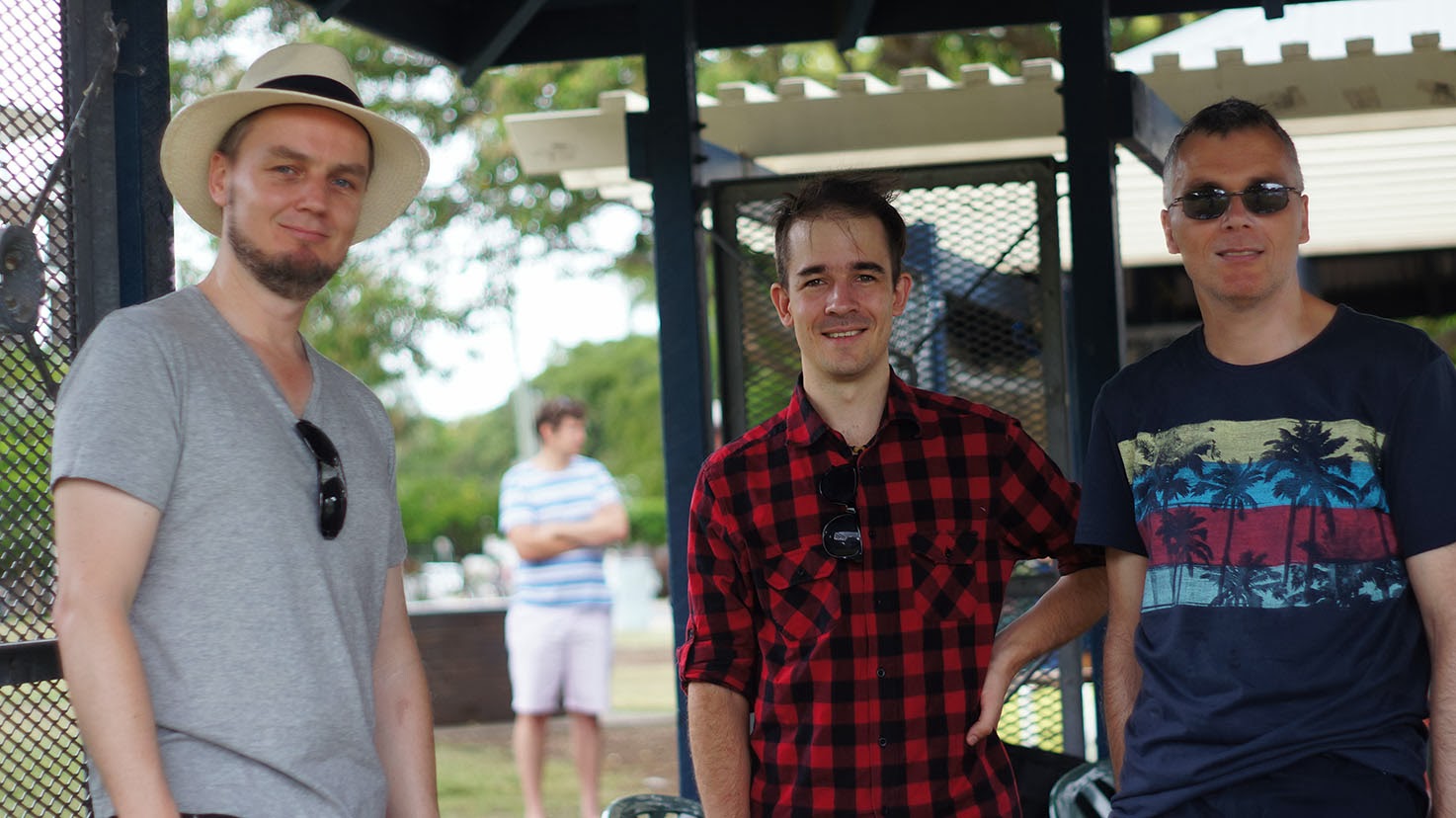 Now here's a crew I could hang with. 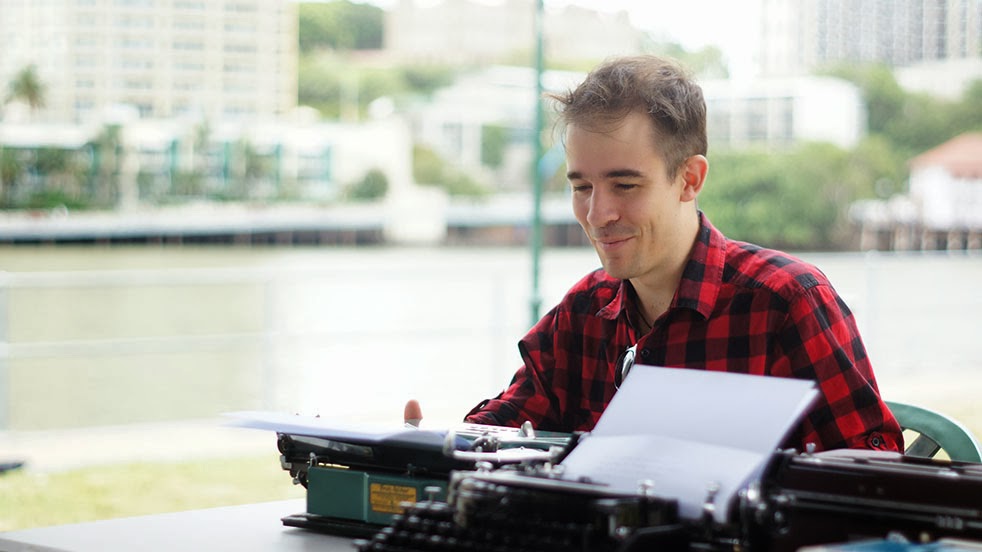 Natalie's Favorit 2 got plenty of love. 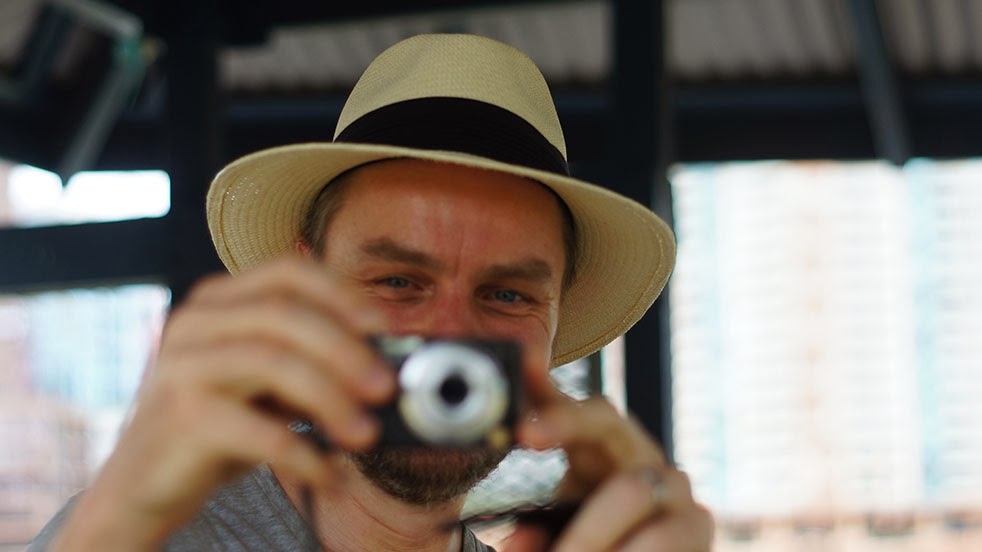 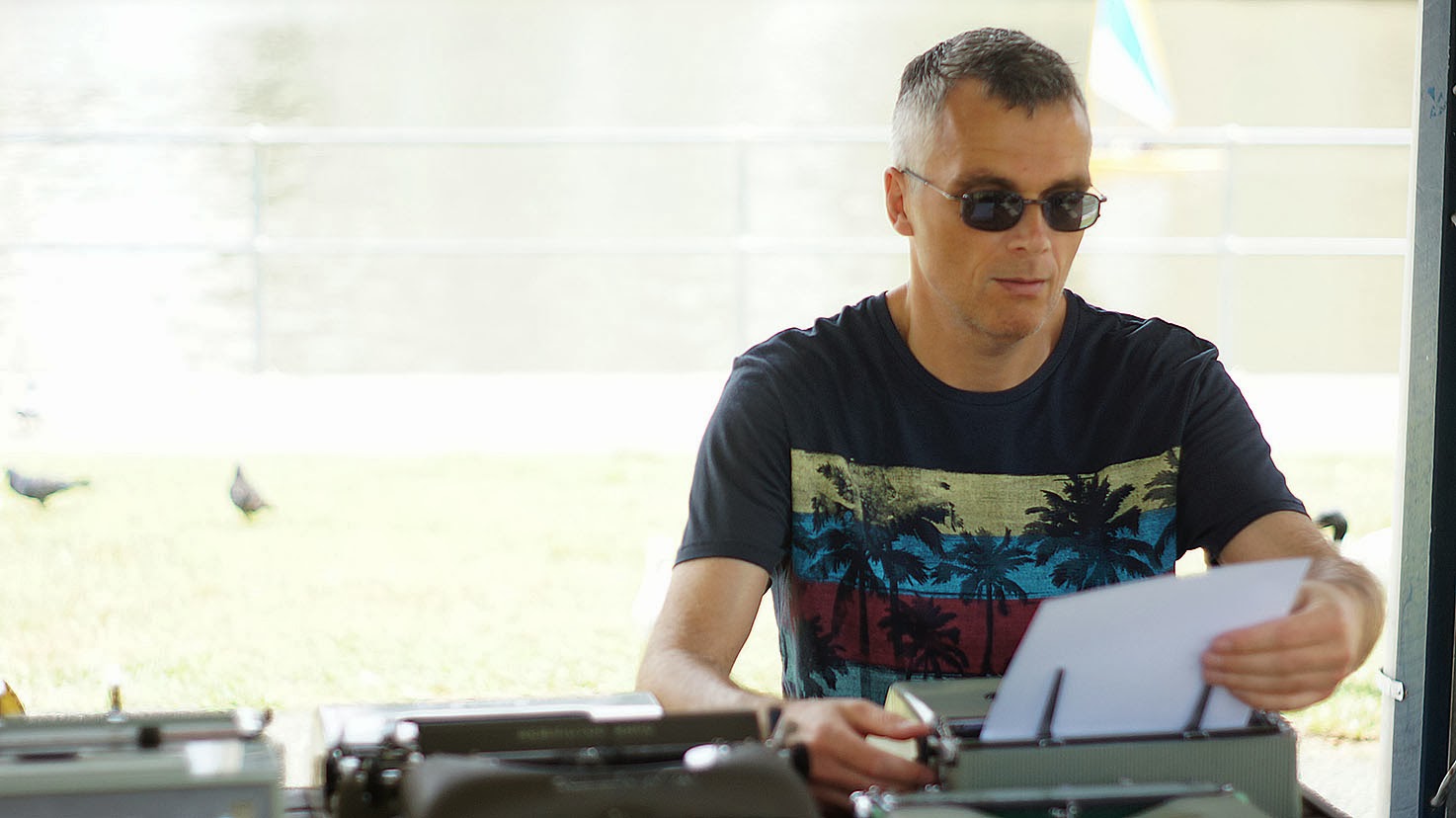 Steve K got down to some serious writing. And just looked.. cool.. doing it. 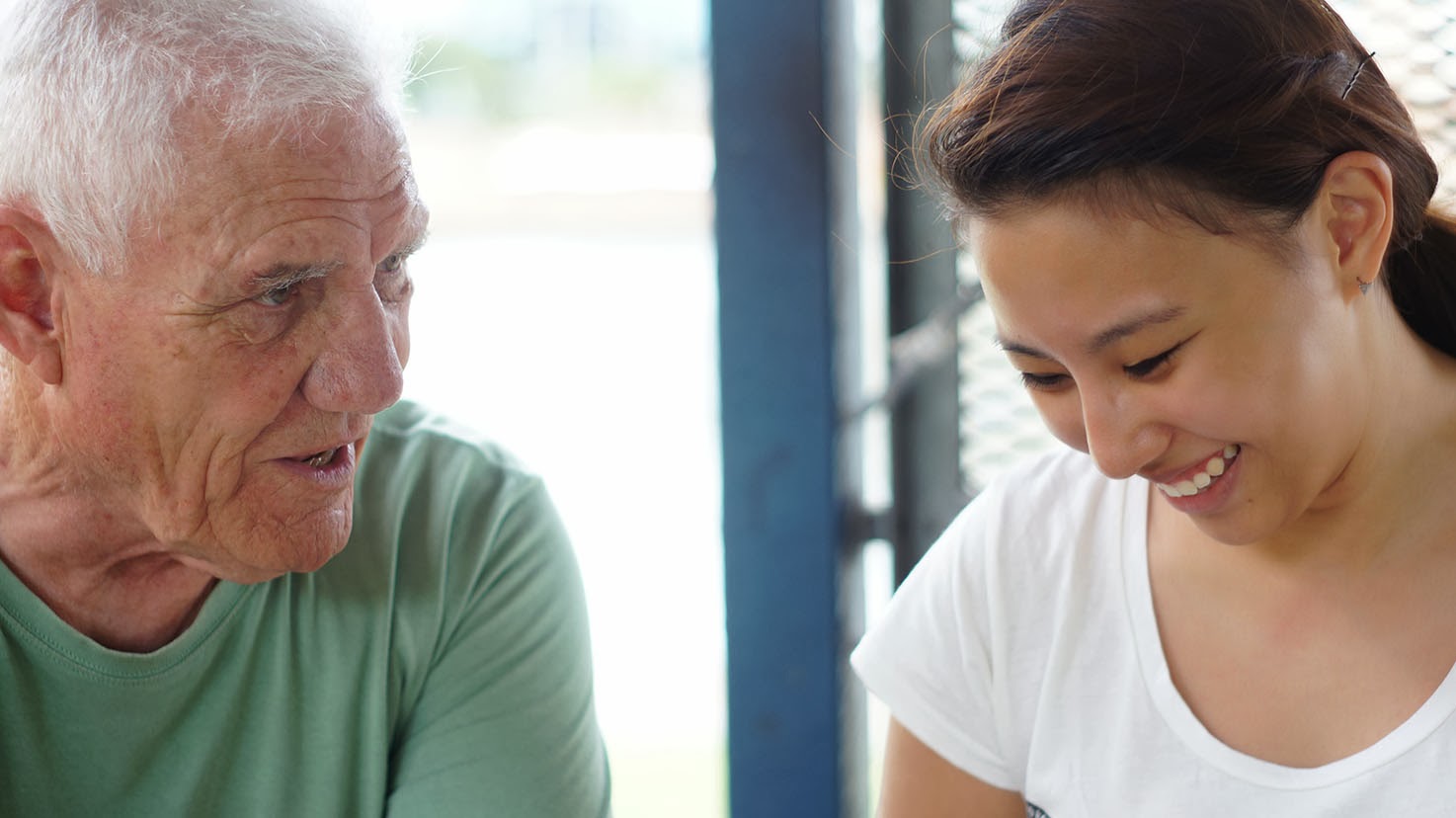 It's always great listening to one of John's stories. 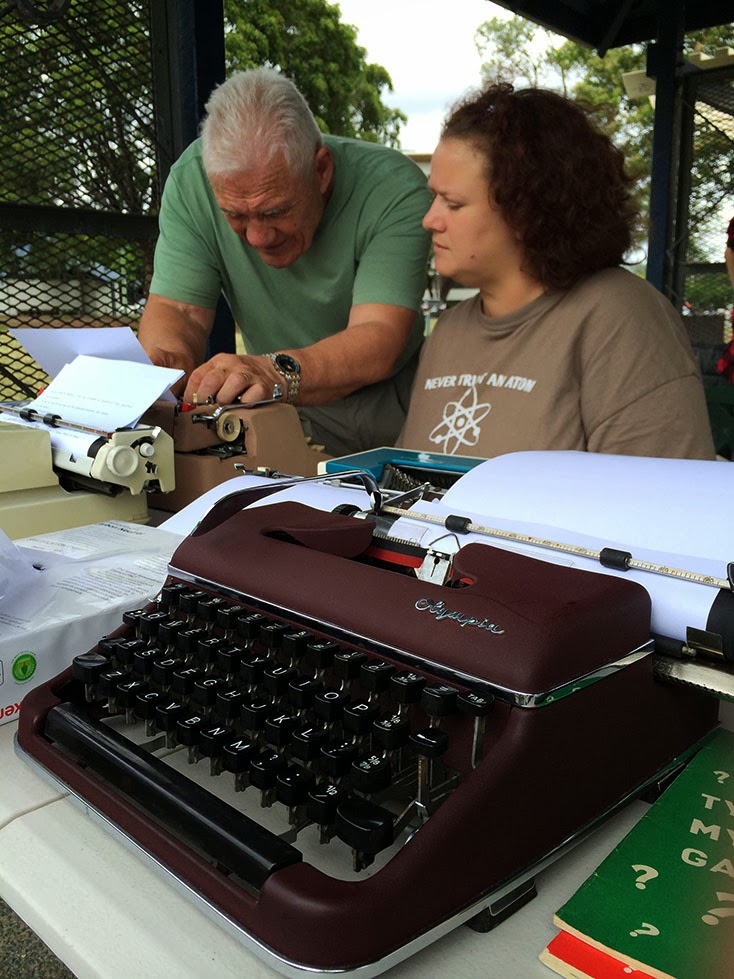 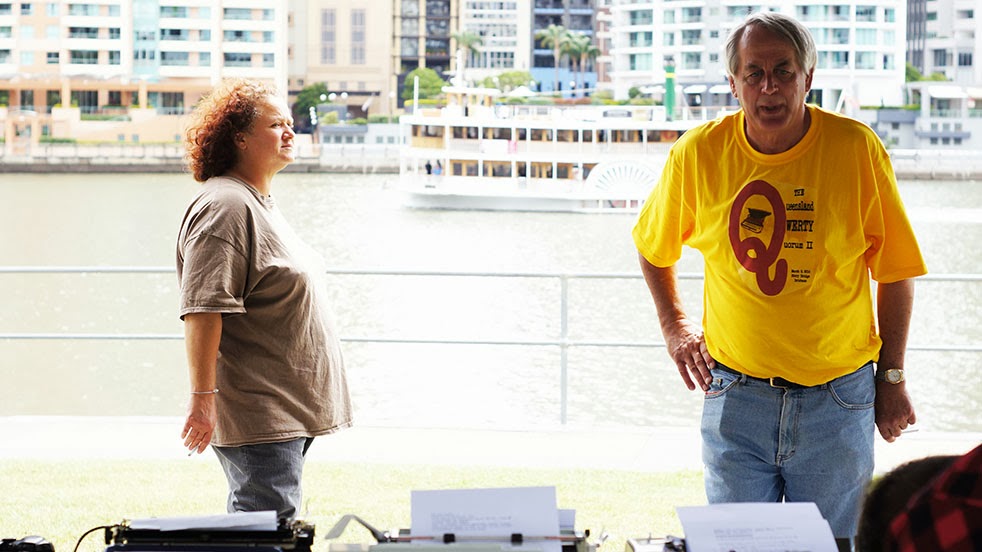 Rob had plenty of history. And found a fellow smoking buddy with Lou. 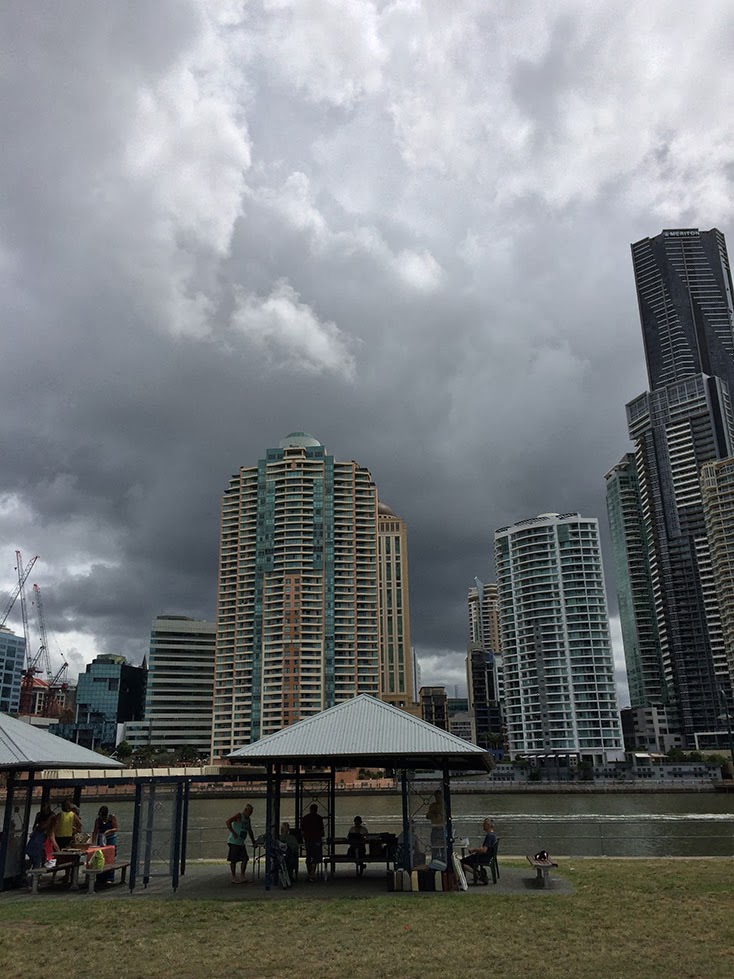 For the most part we had a very lovely day, and the sun was enough to give me a sunburn. Looking at Rob Messenger's photos I could see my face progressively grow pinker as the day went on.

However every so often we had some heavy cloud come over and threaten to dump a little rain. We even ended up copping a bit of a shower at one stage, but it soon passed and we were once again in the Queensland sun. 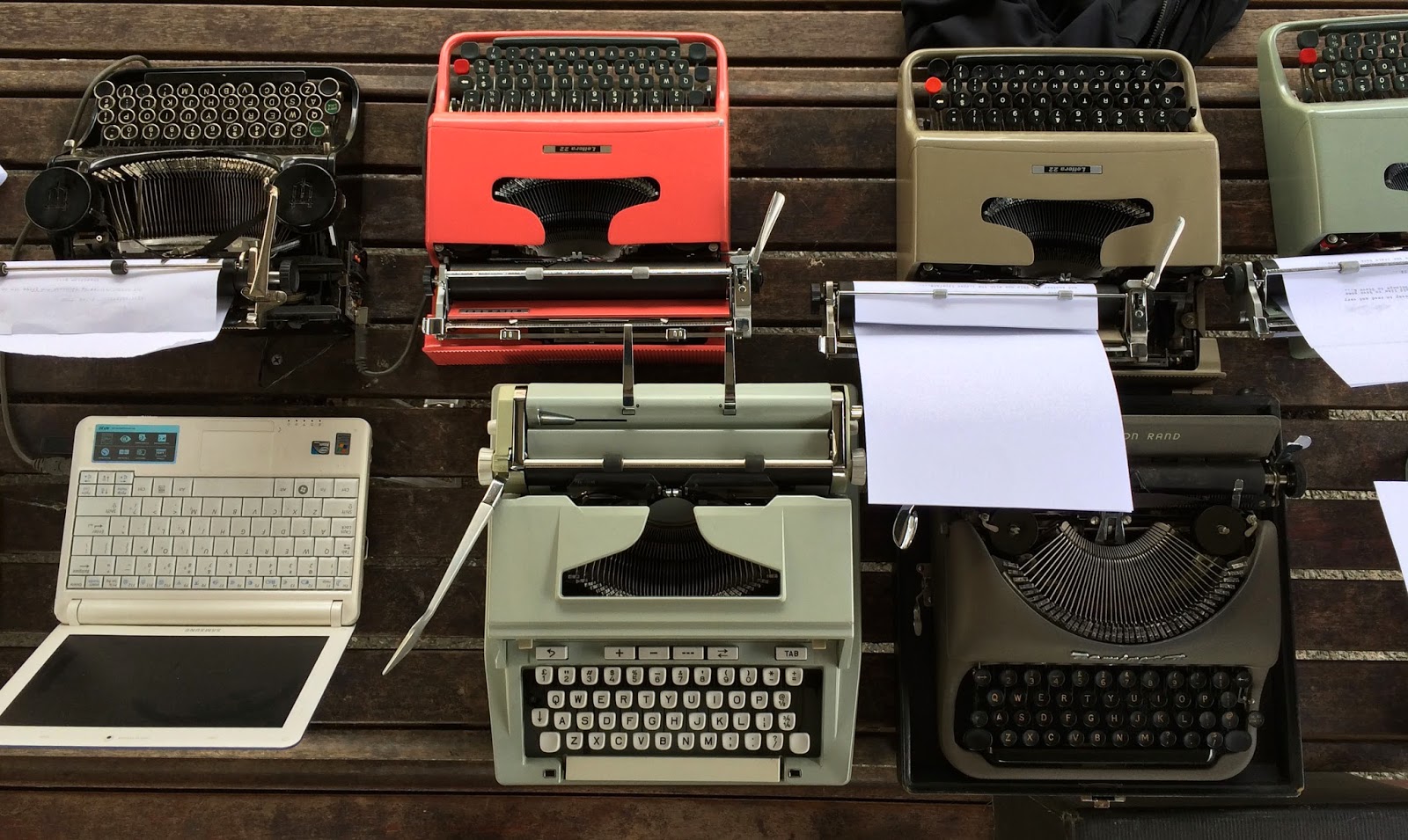 Last year we had two beautiful Lettera 22's side by side. This year, Louise brought back Pinky Beecroft and Steve Snow brought his mushroom L22. But this year they were joined by Steve K's beautiful machine, that is in incredibly good condition. I have a feeling that I'm going to have to bring my pistachio green machine next year so we keep the L22 love growing. 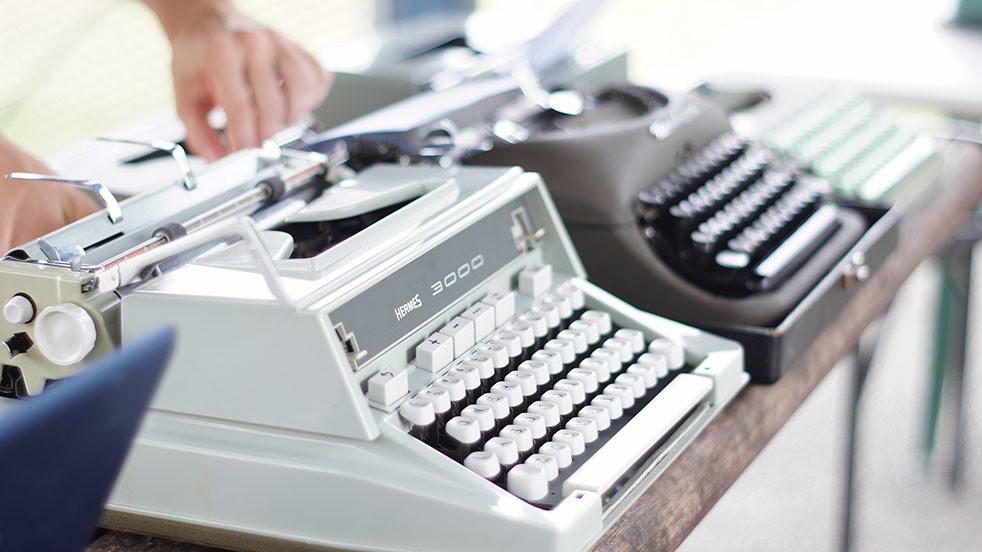 There were two 70's plastic H3K machines. I brought my cursive, while John brought another machine with a very fine larger techno typeface. John also brought several other Hermes machines - an amazing, yet dauntingly large Hermes Ambassador, and a very interesting Hermes 9 that was set up for telegram operators. 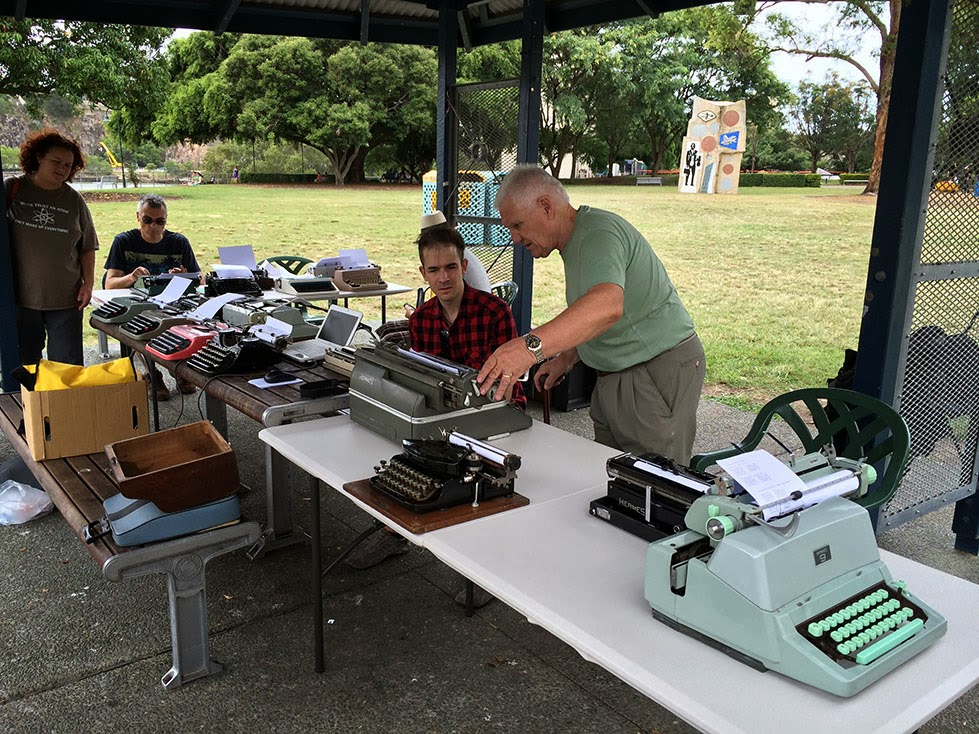 John seemed to have the Hermes machines down pat, as he brought his glossy and charming Hungarian keyboard Hermes 2000. But I rounded out the collection with a Hermes Baby named 'Kermit', which Louise ended up taking back home with her after the meeting.

Mind you, John's Cyrillic Klein-Adler was nothing to be scoffed at. And would certainly hold its own in a 'most interesting machine' competition. Although Steve Snow's Royal QDL, and immaculate Underwood Noiseless 77 were also attention-stealers. 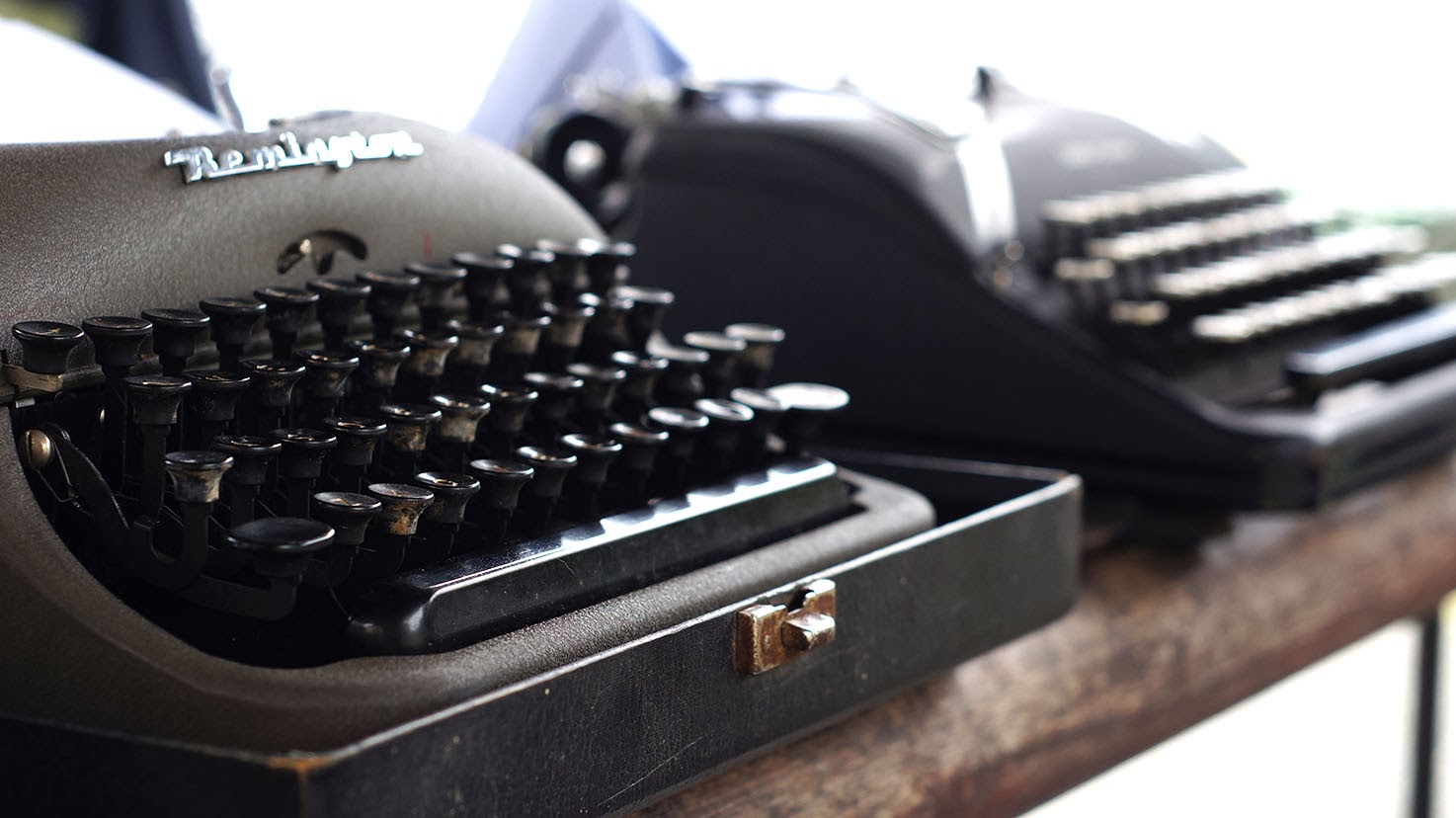 Rino brought in a Remington 5T that was very nice to type on. It felt just that little bit smoother than my own 5T machine and I could quite happily spend an afternoon typing on it. Next to his machine I sat my Smith-Corona Sterling, which was sadly playing up. Some screwdriver love will be coming its way soon.

Rob didn't disappoint. He had his brilliant Underwood 4 bank with USB attachment hooked up to his laptop, and was giving demonstrations on how to use the machine. But Rob's real beauty came out later.... 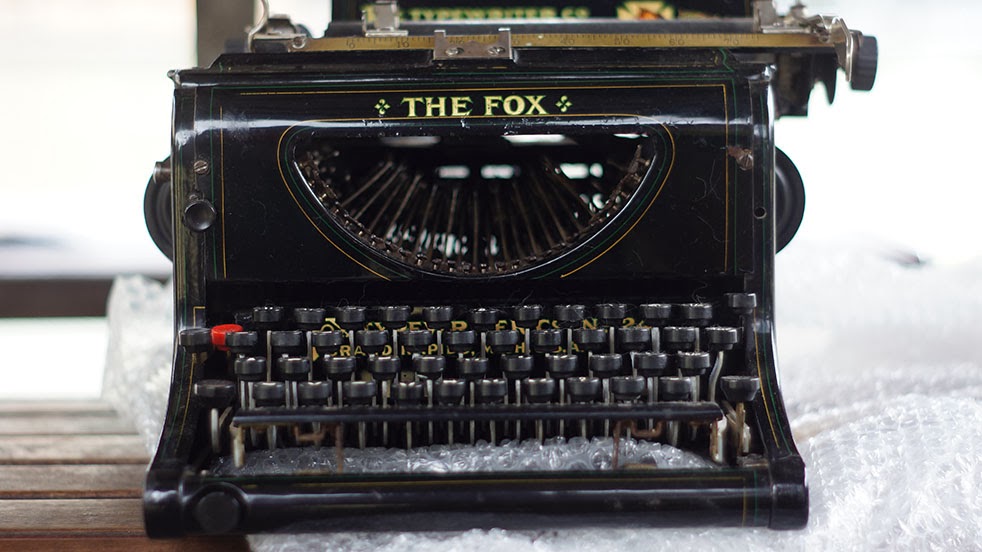 It was a stunning Fox, and really stole the show. The machine is now heading to a new home in John Lavery's collection, where I'm sure it will be just as loved. But what a machine!  Everyone wanted a go on it. It was a real cracker.

Rob also brought out a very interesting Monarch that was heading to John's as well. Such a beauty! 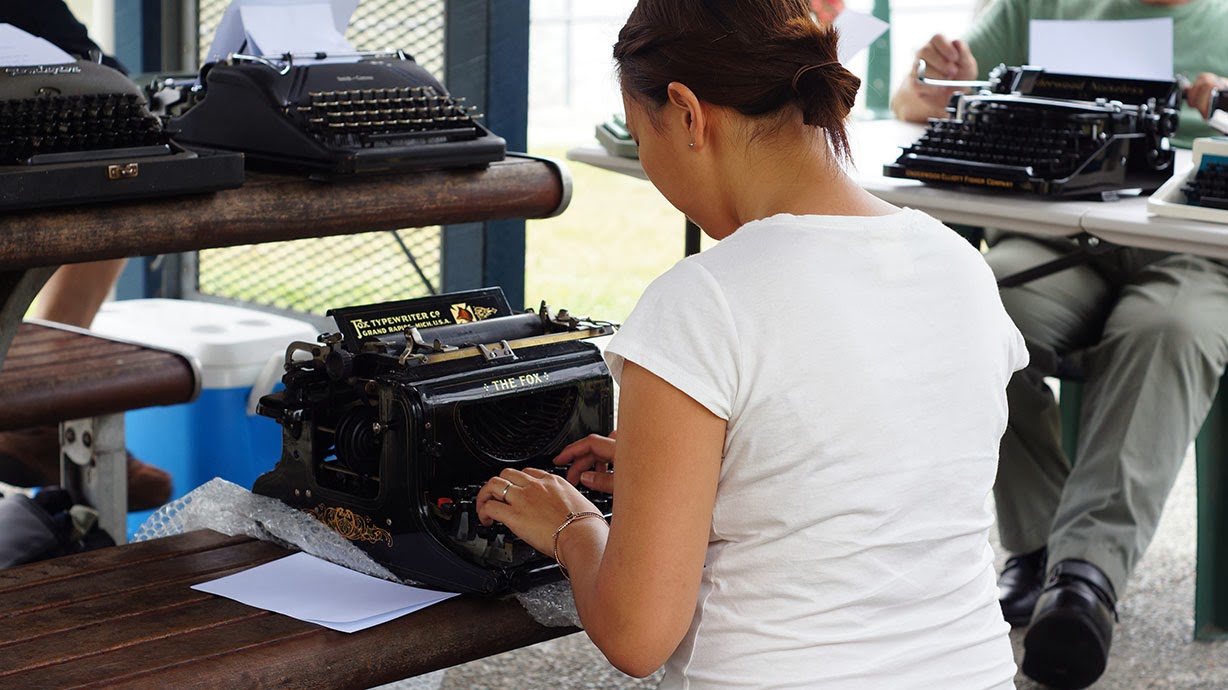 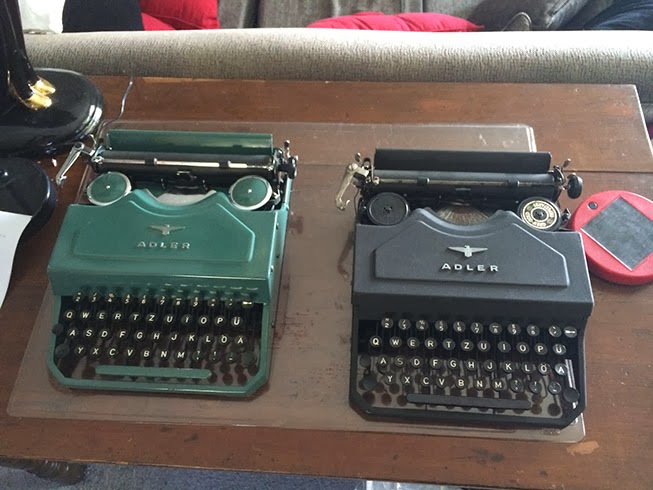 Natalie brought with her an amazing looking green Adler Favorit 2, which joined John's Klein-Adler in bringing some push-rod classiness to the event. And can I say, it is nicer than my own Favorit 2. Much nicer.

The other machines I myself brought were an Olympia SM3 in maroon (yet to be featured on my blog) and my Remington 16, AKA "The Filthy Platen" - which stayed in the car, as I couldn't be arsed lugging it's 15 kilo bulk it across the park after carting the tables and chairs. 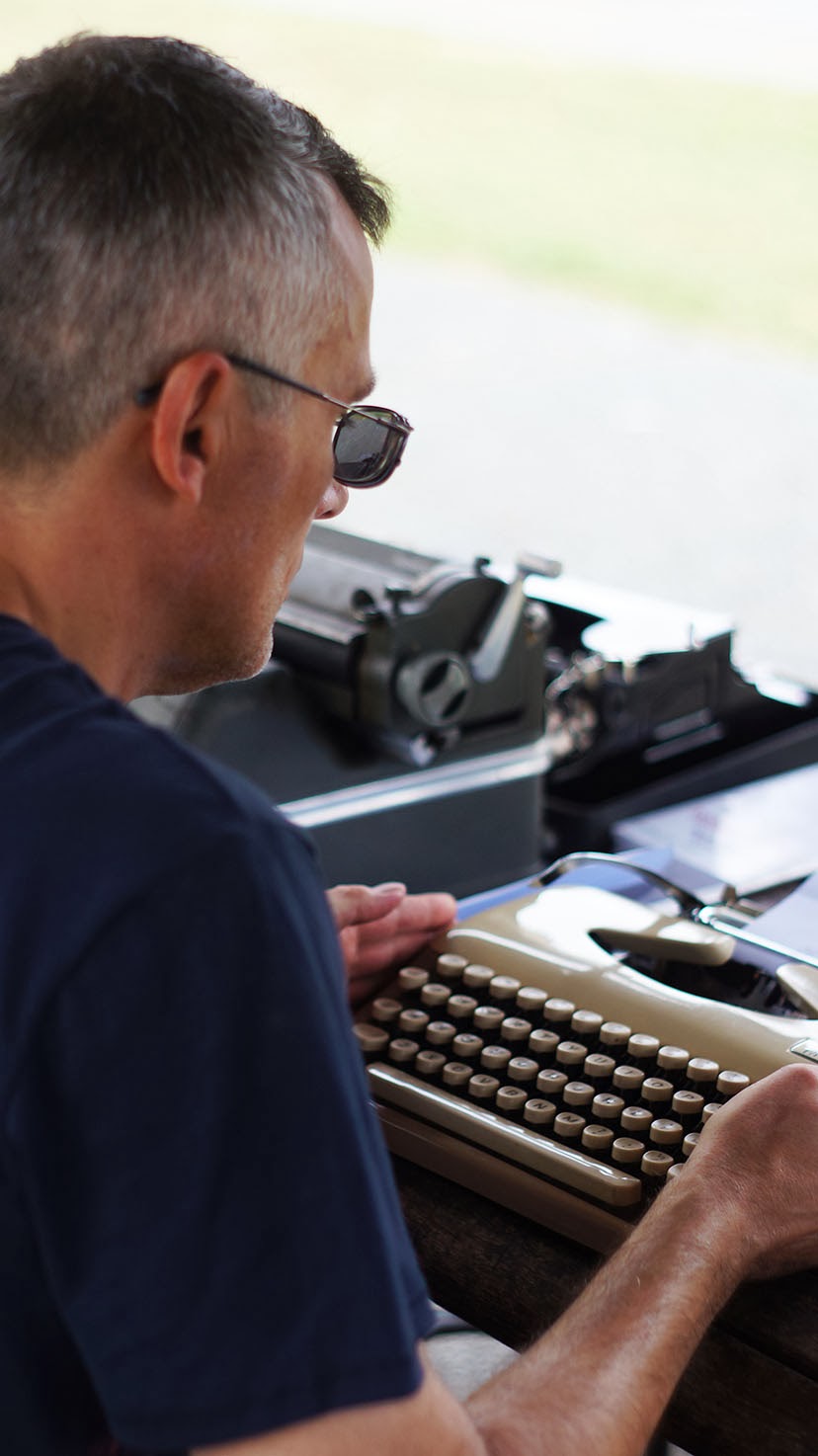 Oh yeah, and I also brought my Triumph Tippa, which is one of my finest traveller machines. It seemed to surprise a lot of people with it's sharp and punchy feel. Which is something it often surprises me with whenever I get on it. 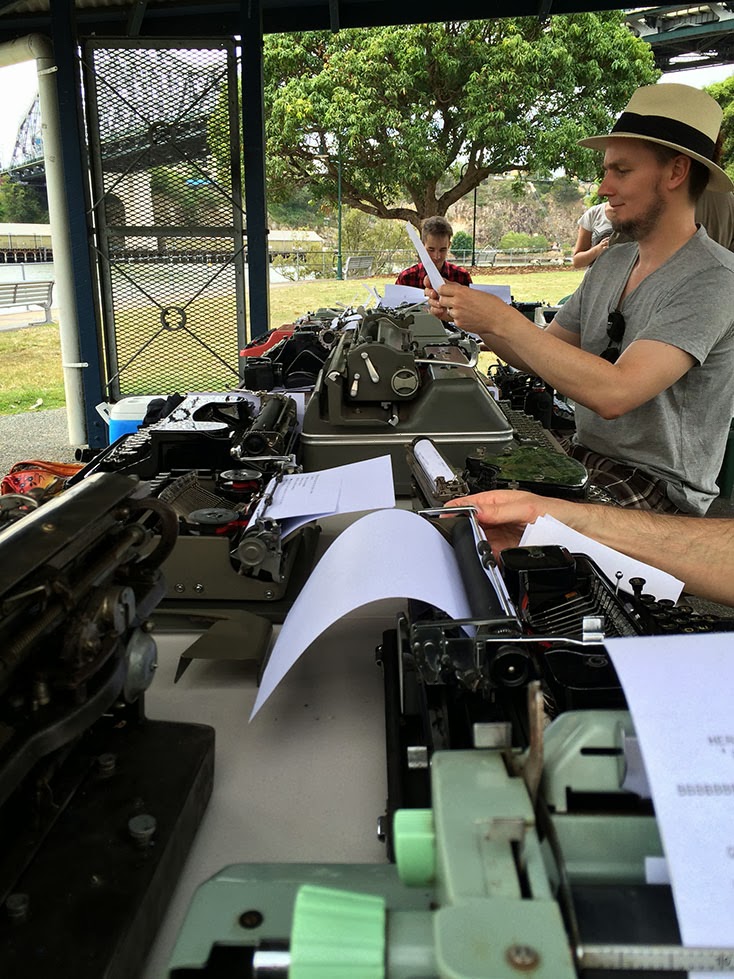 All in all, I think everyone had an enjoyable day. I certainly did, and I'm pretty eager to get to another one next year. I'm sure it will happen, even though circumstances are changing for many of us in the next 12 months.

Everyone that came today had something in common, and it wasn't the typewriters. They are all story tellers. These are people that enjoy a tale and love writing and reading. I think really the typewriters are incidental, and are an extension of their story-telling. Steve K, Steve S, Rino, Lou, John, Rob, Natalie and I guess myself - all have tales of our lives we want to tell - and in some cases tales of lives that never existed. And in a way I feel that's really what this was all about.

Well, at least as much as checking out the pieces of industrial art-work that each other owned.
WebRep
currentVote
noRating
noWeight
Posted by Scott K at 05:09