To hell in a Baxter box. 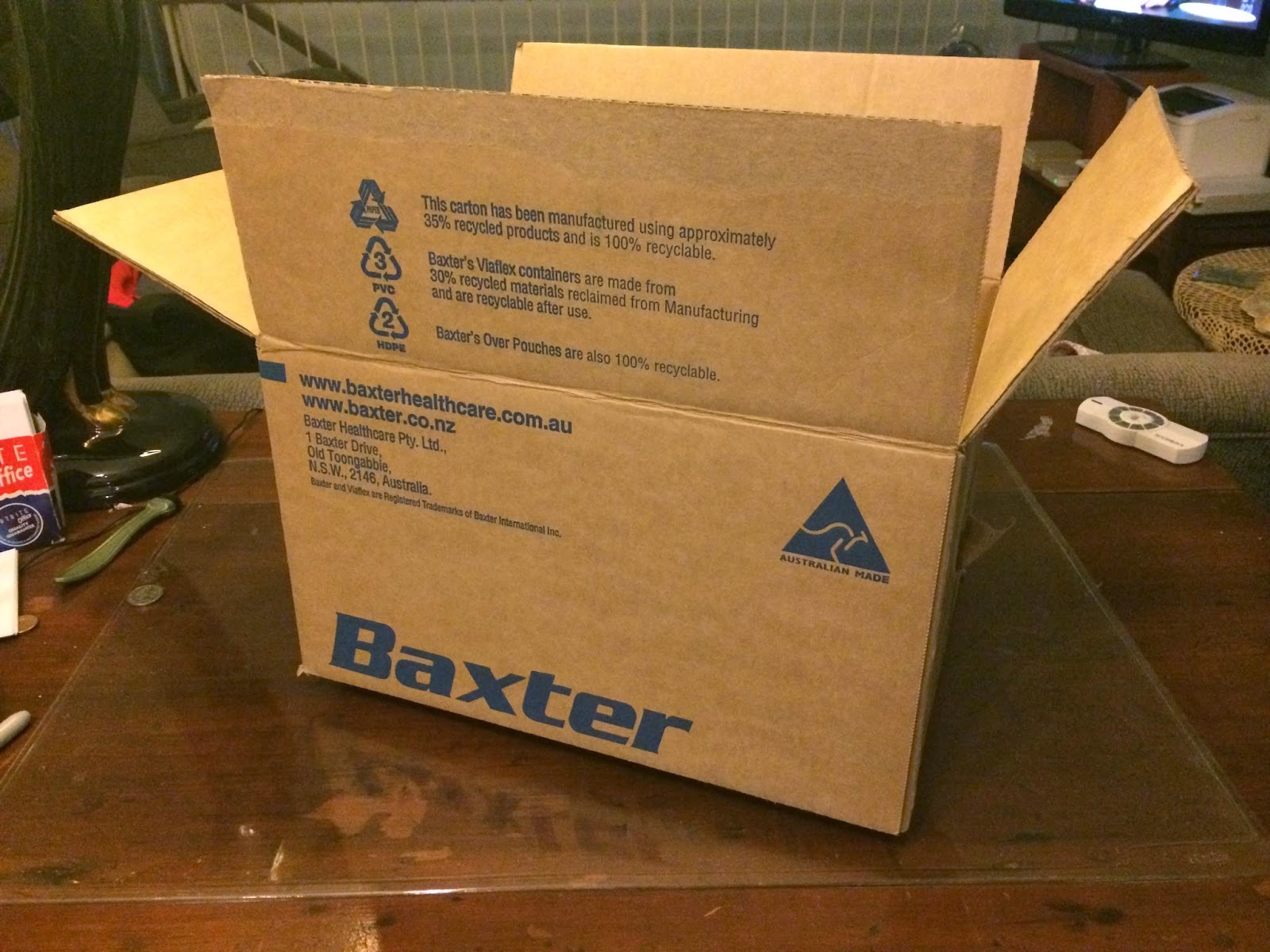 Meet the humble Baxter box. In all of the moves that I have made over the years, these boxes would have to be the ultimate for shifting a variety of things.

These boxes are used to hold and protect intravenous fluid bags (those clear bags of mostly water you see up on poles which have a tube leading to a patient) during transport. Inside each box is between 12 to 14 kilos of bags that are like jellyfish to hold.

As such the cardboard is thick and highly protective with an uncanny ability to take some seriously hard knocks. Not only that, but they aren't 'too big'. I made a huge mistake last time I moved by packing books and magazines into larger boxes, only to find my back being brought dangerously close to snapping when I picked them up. If you have lots of such publications, these are the boxes you want because you won't overload them till they are too heavy.

Ask anyone that works in medical, and you'll find that these boxes are well regarded by many for their near magical abilities. Yes. They are that good.

Okay. It's just a box. But as much as these boxes are great, I am so sick of seeing them. I've been grabbing as many as I could from the hospital to... well.. pack my life up. And these (along with several other sizes of boxes) are giving me starting the s**ts because they seem to be filling my house.

It isn't the fault of the boxes. It is just moving. Jane and I are 'Stuff' people. Judgemental f**kwits might imply that we are hoarders, but we just have a couple of collections that we are passionate about - and we aren't into minimalism. I'd dare say most of the typosphere probably can relate.

That said, I've been culling. Culling like you couldn't believe. And while the e-waste is almost the size of a Ford Ka, I also have pieces of furniture that have become rather superfluous. Anyone want a Balinese sideboard? A Bookshelf, bedside tables, and a set of Art Deco shelves, an Art Deco desk, a 30's era radio that has been converted into shelves?

But I've hit a huge snag. And it comes with 4 rows of keys (and some with just 3). I'm trying to pack my collection of typewriters so they are protected and packaged for any potential possibility.

You see, we still don't have an answer about that overseas position that was on the cards some time back. In fact, the wait has gone on for so long now, that Jane has headed off and sought out another job for herself as she needed a new opportunity after fighting with some nasty politics at the hospital for the past few years.

I don't blame her really. She's been doing 50 - 60 hour weeks, and it was starting to really get to her.

As such, she applied for, interviewed, got offered a job that she then rejected, then was offered a higher paid position that was above the job she originally applied for - which she then accepted. All before we heard even a whimper from the overseas position.

As such I find myself in a very weird situation. Jane's new job is actually in my home city of Melbourne. She's moved down there and is living with her sister while getting settled into a city that she's only visited briefly before. Meanwhile, while we're still waiting for the other job I'm in Brisbane floating between contracts at the hospital to keep afloat. There's no point dragging everything a couple of thousand k's down south only to find ourselves bundling it into storage and heading overseas a month later.

So here is my quandary. How do you pack your typewriters expecting that you are potentially moving  them interstate (needing protection) or or maybe just putting them into storage (requiring minimum consumption of space)? There's also the real possibility that however I pack them, I won't be here to supervise them getting carried and loaded onto the truck so I need the packing to be robust enough to handle all kinds of potential f**kwittery. If I knew for sure which way I was going it would be simpler. But I need to somehow pack to take either option and their differing needs into consideration.

Anyway I've been occasionally selling some of the less loved items from my collection. I hope to make it a bit easier to pack by thinning the numbers of my harem.

Meanwhile I'm doing the world's slowest house packing. It has been going since January, and I have only emptied most of the cupboards. The bookshelves are yet to even get a look-in. Oh man... all these books! I'd better get plenty of Baxter boxes.

Anyway. here's a gratuitous shot of me typing some thank-you letters to the staff of a department I just left. Also featured in this photo is a bigger packing challenge than my typewriters - a ceramic Art Deco lamp that near 4 feet tall and quite fragile. 'The Lady' is going to be hard to sort out. 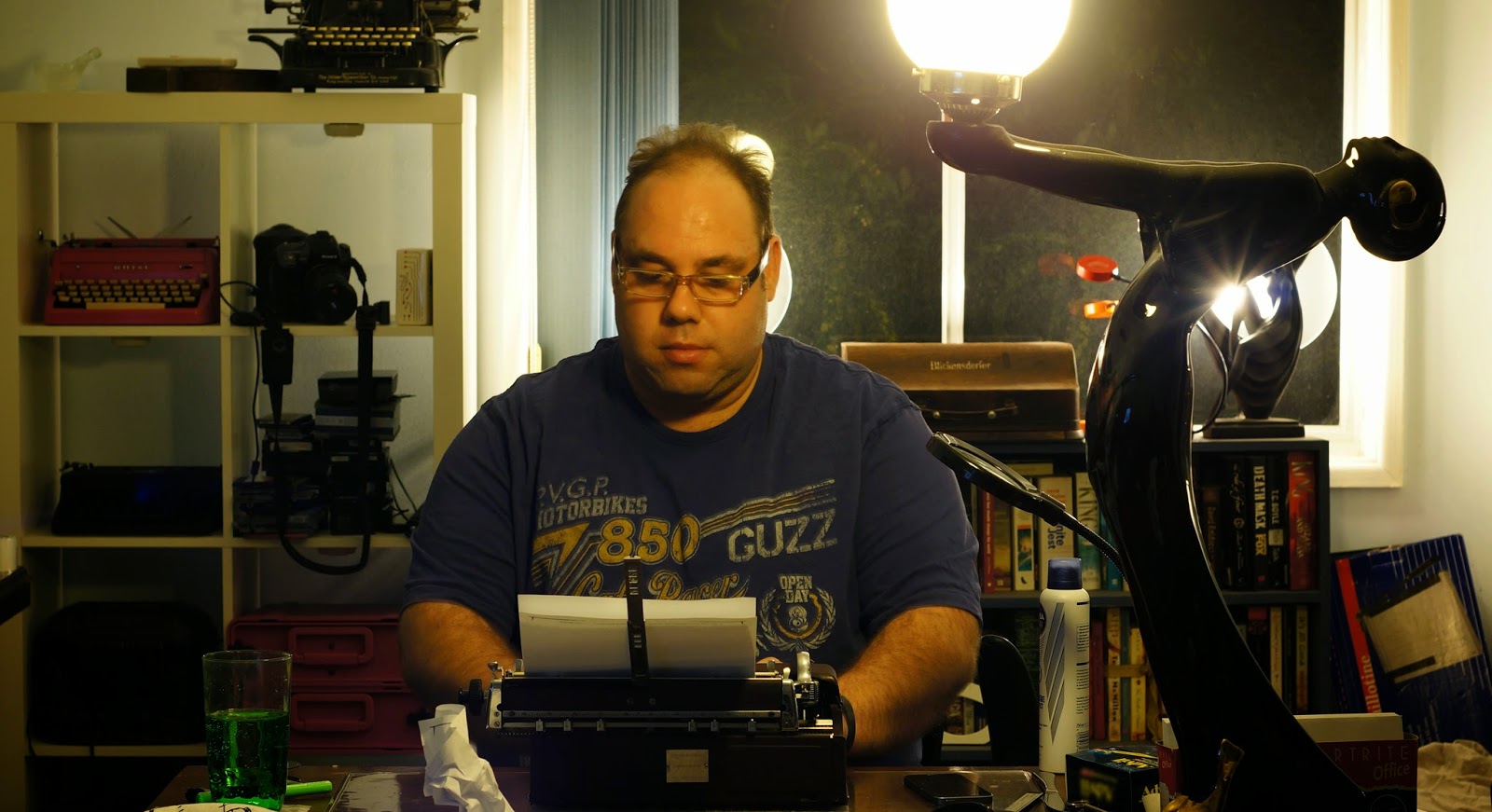