In the last year or so many of the typosphere have noted that there's been a dramatic increase in the price of typewriters sites like eBay and Etsy. While the market for these machines is growing and typewriters are no longer seen as valueless antiques sitting in the garage, there's naturally been a steady increase in interest in information on typewriters online.

When Rob shut down his blog last week, we had an interesting opportunity to get a small insight as to what kind of impact our blogs are having on this this audience. I've been quietly watching for cues on what my own blog does with a new generation of collectors, but the shutdown of Rob's blog gave me an larger insight of its cultural impact.

This is graph from my blogger page that shows the activity on my blog over the past week. 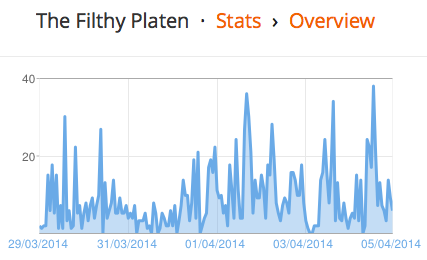 This graph depicts the activity of views on my blog on a more or less hourly basis. As you can see the peak viewing point over an hour was 40 individual views, while there were Interesting activity lulls.

My blog tends to receive a fair few hits from Rob's blog, but his blog isn't typically seen in my top 10 referrer sites. The typosphere page usually sits at number two, with the bulk of hits to my blog coming from people looking at other pages in my own blog. In essence, I am my own greatest referrer.

But while Rob's blog was down, something did happen to the activity on my blog. 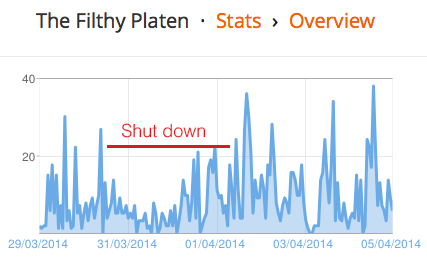 As you can see on the graph above, while Rob's blog was down I had a period where activity in some hours dropped frequently to nothing, while it only had occasional peaks of interest. During this time there was a flurry of posting on Facebook and in the forums about Rob's blog being down.

As the period progressed, I started to get steady increases of interest that would drop off suddenly. But when Rob's blog went back up, there was a flurry of activity.

Which made what happened next also interesting. 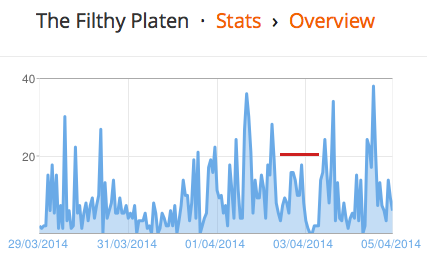 It took a day or so for the forum readers to catch up with the news that Rob's blog was back online. But about the time that the postings in Yahoo and Facebook stopped, there was a 6 hour period when my own blog seemed to grind to a halt before the two-spike 'evening shift' pattern started again. See how with every peak there's a smaller occurring peak before it? I suspect that's the time difference between the east and west coast of the USA coming online in the evening to do some reading after work. Unfortunately the scale on blogger's graphs is hard to interpret accurately.

Notice those spikes missing anywhere? On the 31st I had absolutely no sign of that 'evening spike'.

Let's have a look across a broader period. 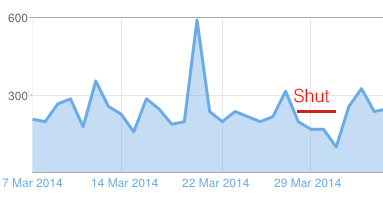 In this graph you can see the I have a very clear 'Sunday reader' spike. This is why I tend to post most of my blogs in Australia on a Saturday night, or a Sunday day so that it corresponds with the reading periods of the audience both here in Australia and overseas.

It is also the day that eBay makes their most money, as the sales items on that day tend to sell higher as there's a larger amount of people around to bid against items.

While Rob's blog was closed my Sunday peak was less, and the general readership over the week decreased notably.

This has also corresponded with another interesting trend that I've seen occurring. There is a notable impact of blog entries on interest in specific typewriter sales. For example: When I presented my completed chrome Royal on my blog some time ago, a second hand dealer in Singapore rushed to get a similar machine which they then proudly displayed online. When I displayed my Apothecary typewriter, the same seller also highlighted a machine they themselves had owned.

Remember when I displayed my burgundy Groma Kolibri? Well, a unit that had sat unsold for a while on Etsy at quite a high price, sold the next day. I've seen very similar things happen with machines displayed on other people's blogs.

What I'm seeing is a 'drive to buy' that is driven by 'typewriter culture' blogs like my own. What I write about on Sunday sells on Monday.

Rob's blog has a massive impact on this 'typewriter culture' audience, and his blog can shift attitudes of larger groups. To all intents and purposes it is very similar to the impact that Oprah has across consumer culture. Rob's blog doesn't rule the typosphere, but it has enough gravity to change the trajectory of things that come close.

This has happened as a result of one single thing: The sheer size of Rob's blog. While the quality writing and research has brought an audience, the frequency of Rob's writing has meant that Rob's blog gets far more reads than every other. The sheer volume of Rob's blog creates enough hits through google with both data searches and images that it is constantly near the top of almost every typewriter search topic. Were Rob to stop writing his blog tomorrow, this wouldn't stop. The amount of material that Rob has written attracts so much of the audience that it will only continue to grow.

This phenomenon is observable in my own blog. This has happened to my own 'Hate letter to my Valentine' blog entry. Every year it gets more and more popular due to the ever increasing number of hits it receives. This year the gravity of the readership took my blog from an average 100-250 readers a day to 200-350 readers a day. As I get more and more reads, the pace of my own blog's readership has increased.

So you may be wondering why I see this as a lost opportunity. Well, I think we have gotten the wrong idea of what a collector is as a group. Collecting is always going to be seen as a personal thing, but it also tends to be a community thing at the same time. In the past there has been a distinct view as to what is a typewriter of value, and what is not and this is something that is passed along by an involved community.

Were you to regard your collection by its value, other collectors would (and rightly so) scoff at you. No one collects anything necessarily as an investment. Indeed - limiting the size of your collection is likely to improve the value of sale later on if you wish to choose it, rather than stockpiling.

But typewriters now have a social currency that it didn't have before. The curious are seeing the 'hipsterism' of typewriters, and are finding themselves curious about machines that they have never had to use in a work situation or professional capacity. Typewriters have become hobby tools and are associated with creativity, rather than the bureaucratic purpose that drove their development and sales for over a hundred years.

it is at this point that we are seeing a dramatic change in the face of what is a 'typewriter collector'. Machines that were previously seen as worthless actually draw more interest. Sure, we'd all love to own those beautiful antique machines that we've seen in other people's collections, but at the same time machines that are immediately usable and yet beautiful have greater social value. People get more excited about finding a very common Hermes 3000 in 50's adornment than they do about seeing a Oliver 2.

Other factors other than age and rarity have become key in what is driving the cost in typewriters. Colour, design, associated author and usability have a greater impact. A Hermes baby in 50's 'winged' configuration often has a greater value than a Corona 3. Only a minority of people collecting older machines will typically ramp the price up against each other. By large the people that have only hand full of 30's to 70's machines that make up the bulk of the community fight over more modern machines that these others reject - pushing their prices up dramatically.

Typewriters have now become industrial art. People may just buy one or two, but it is the beauty of them they are looking for. To this end a glossy and shiny Underwood 5 has a greater value than, say a creepy looking Williams. Effectively the face this kind of collector is an art collector. And these are the collectors that are searching our blogs to look at the history of typewriters.

The typosphere blogroll is an audience engagement portal. While we often write blogs at other bloggers, the reality is that the'typosphere' readership are largely people that we don't know. People read up and look for information on the machines that they have on hand before moving on and looking at the history in general. There is an excitement about the history potential of even the most basic machines as they seek the context they exist in. Dismissing a machine as 'common' neglects to value some of the artistry and history that is potentially in every machine.

And linking to pages of people with similar interests actually is really important to this community engagement. People will snake through other people's blogs for hours when they first feel those initial moments of passion. When they get a spark of something interesting, you have a potential for further audience engagement for the writers and creatives amongst us.

It is to this end that I feel in some of the associated publications that are around have rather missed the boat. Magazines and books seem to have neglected this audience. People start to find their interest in typewriters on the internet now days. When people read up on something on my blog or Rob's blog, that isn't the end of it. They look for more. Magazines and books aimed at the attitudes of older collectors means that people have actually missed the bigger audience.

It also means that we have missed other opportunities. For example, what appears on someone like Rob's blog one day, will drive a curiosity to find out more elsewhere the next day. I'll let you draw your own conclusion to why that has been a lost opportunity.

PS. Again, don't be shy if you feel that I have no included your blog in my list down the side. Until recently Cheryl's Strike-thru blog provided about 12 percent of my hits, and often exceeded what the typosphere page brought to me. If your page isn't there it is probably out of neglect and laziness, rather than a lack of interest in your blog.
Posted by Scott K at 16:31