I've been back a few days, and while this isn't a bad thing I'm feeling a little sad about it. Quite sad.

But not too sad. There seems to have been a steady flow of little surprises of late.

Let's get down to business. Firstly, I managed to score a beautiful little Remington portable 2 that needs a little bit of mechanical attention, but will be a gorgeous little machine once I've got it going again. The colour was a surprise. Not only was it different to the photo on ebay, but I've never seen a Remington machine... ever... of this colour. However, it does have all the original Remington decals, and is suitably worn so I'm supremely confident that this is the original colour. 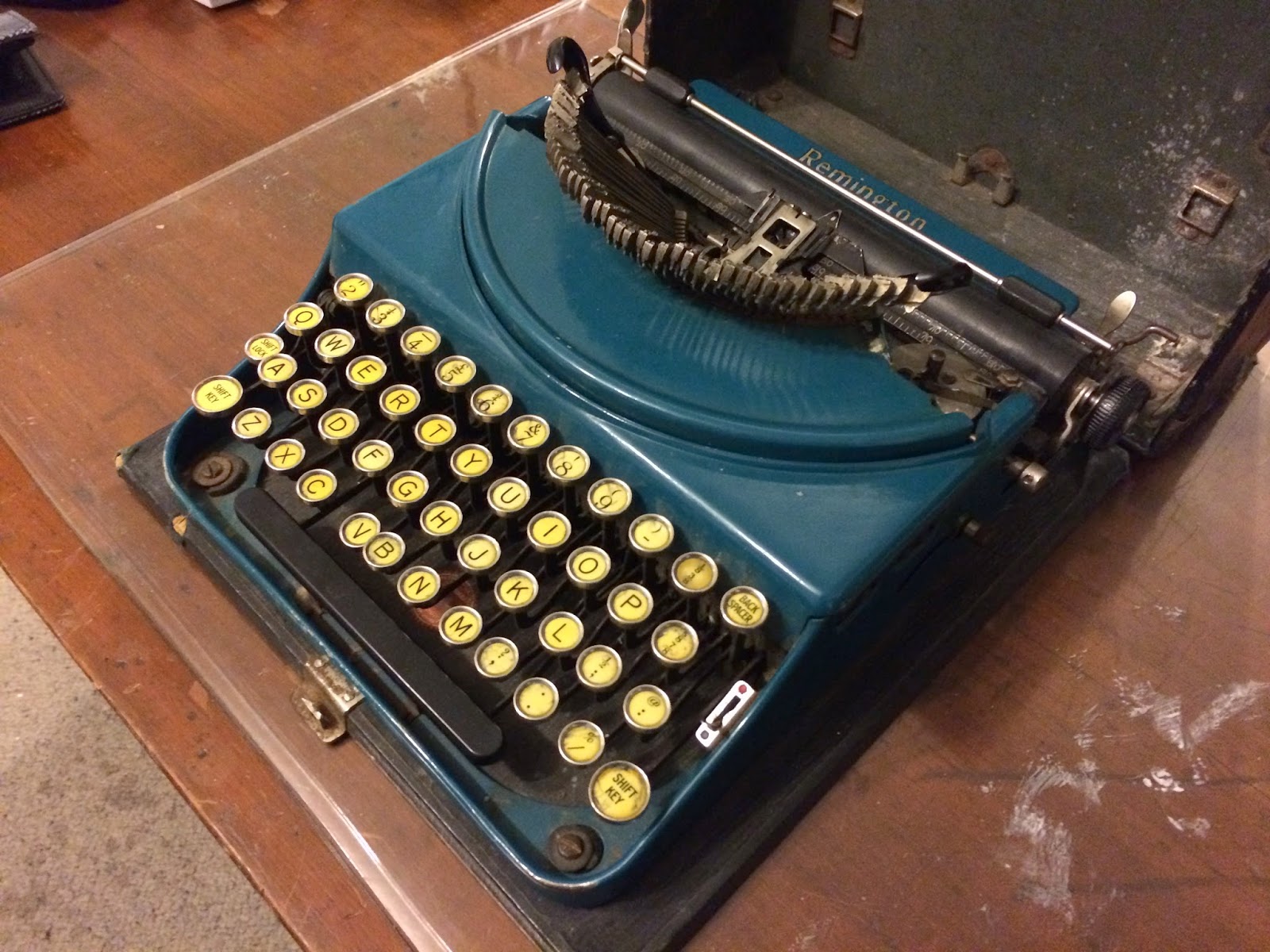 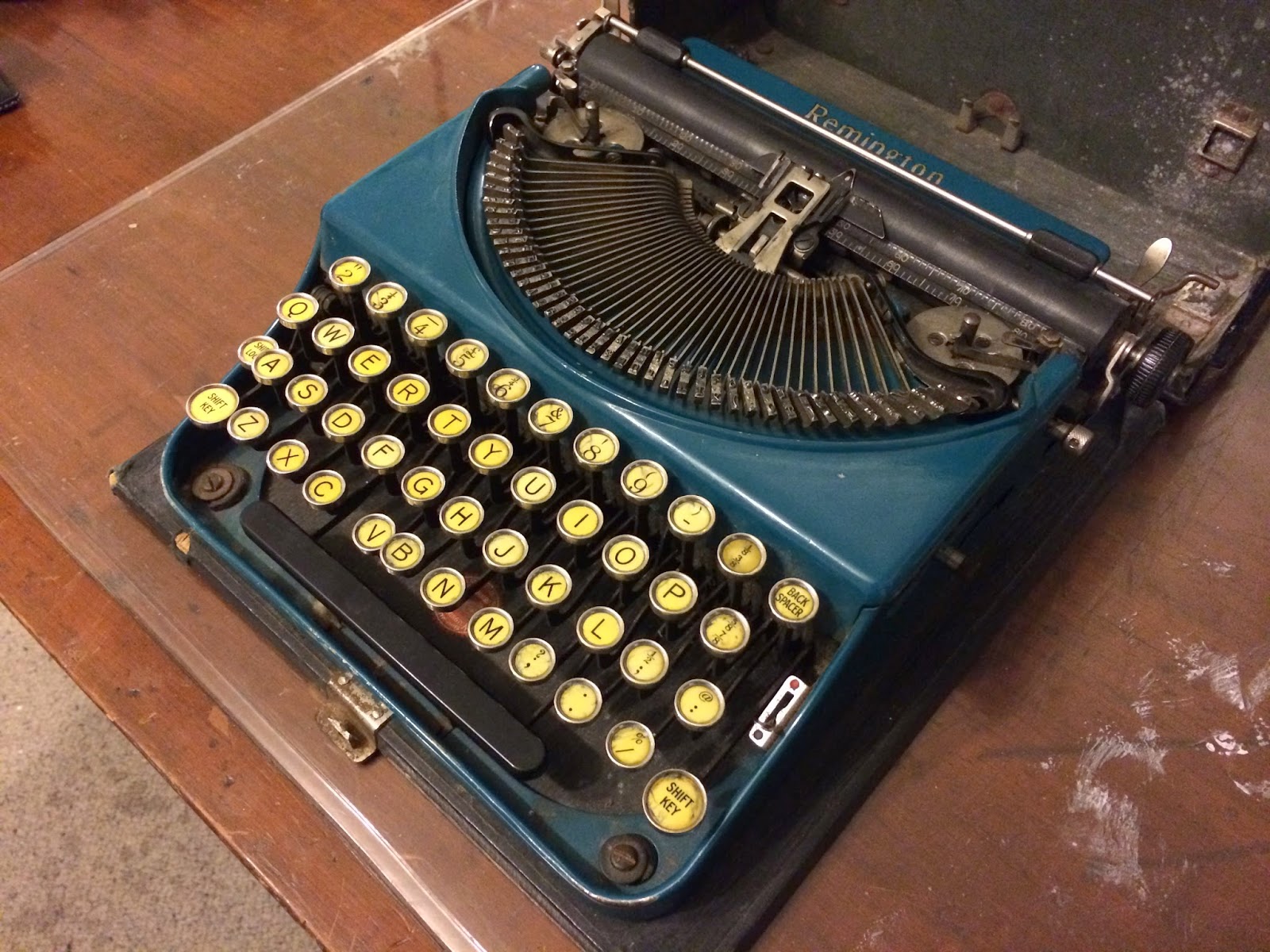 I'm really excited about the potential of this machine. With a clean and a bit of hard work, I think it will be brilliant.

Following hot on the heels of the Remington, is a machine that I've been excitedly waiting for, for some time. It has travelled a LONG way, and is a cracker of a machine - even if it is more modern then the machines I usually like. I have never seen one of those in Australia, or for that matter in the USA. It is the direct decedent of the Triumph Perfekt, and is a far more interesting machine in person than it is in the photos. 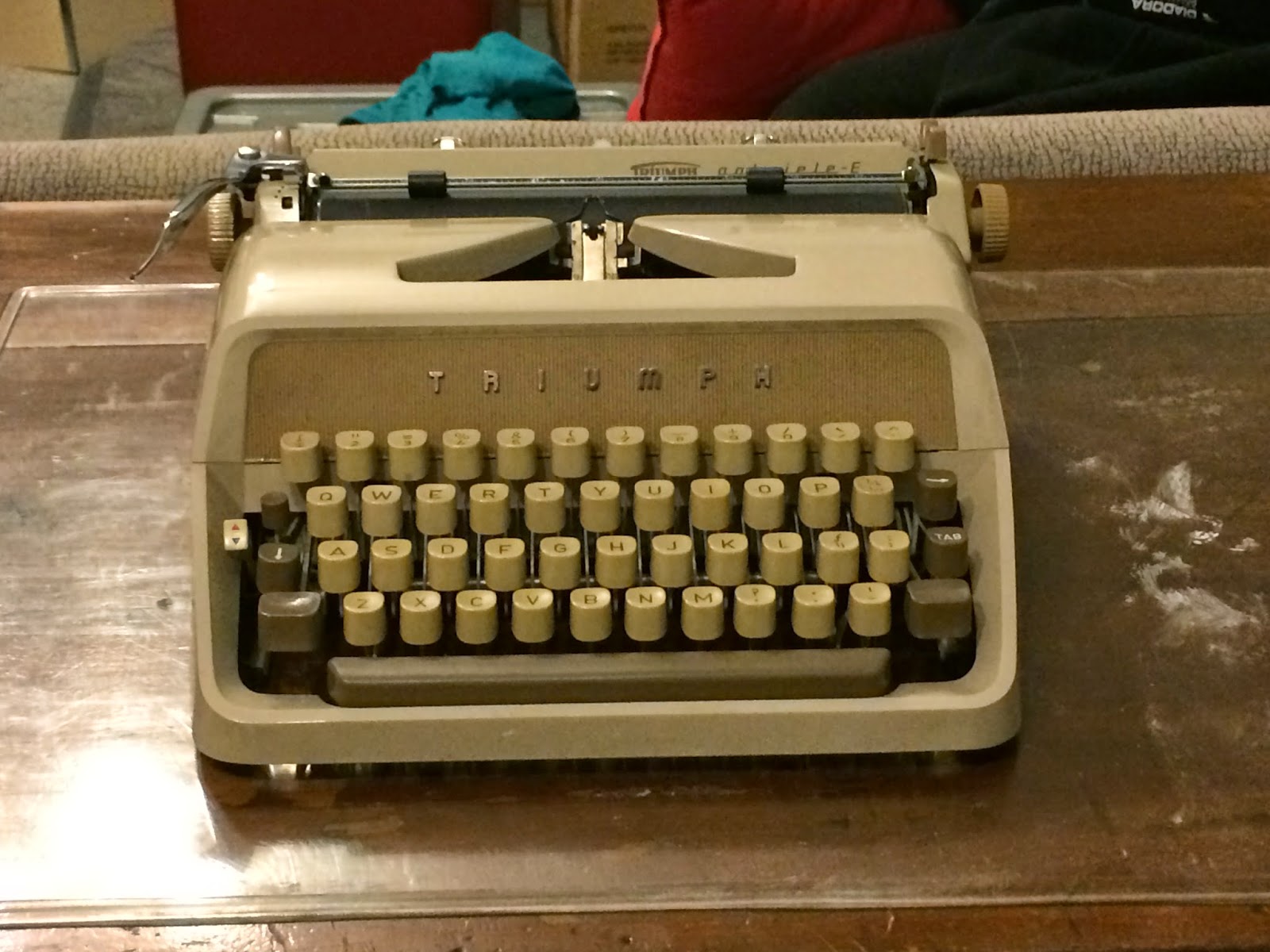 better photos an a full review to come soon.

Oh, and thanks a heap, Spider!

To top it all off, a third machine came into my possession in the last couple of days. This one is a little more mundane, but there's something a bit special that came with it. 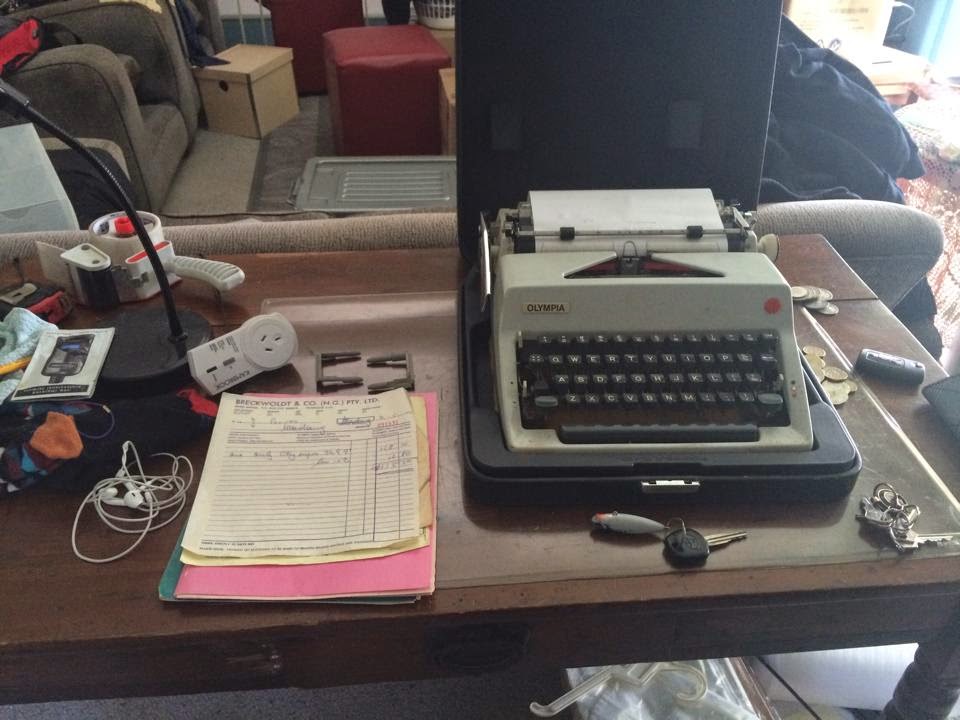 It is an Olympia SM9, which there's got to be about a billion of these guys out there. Sure, it is far from rare. But it has only had one owner (now, I'm it's second) since the day it was bought. As you can see, the original receipt is there along with everything else. The lady that owned it kept everything meticulously organised. 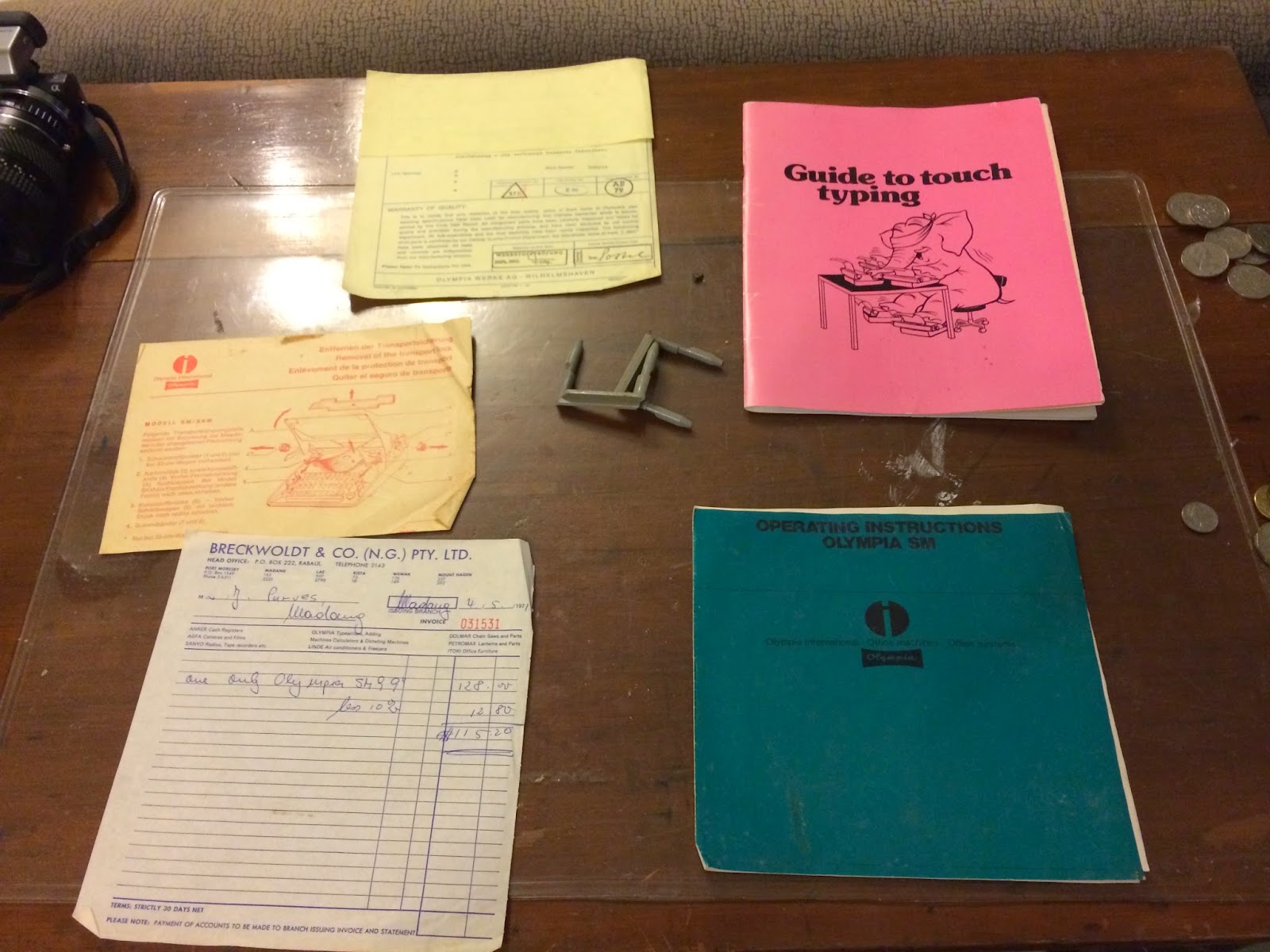 So we have the manual, a touch-typing guide that was produced by the Australian government's bank - the then 'Commonwealth banking corporation'. A test sheet that shows the typewriter's typeface is all in order, and there's the SM9 quick setup guide.

But the receipt told a little story of it's own. This machine was bought somewhere very interesting. 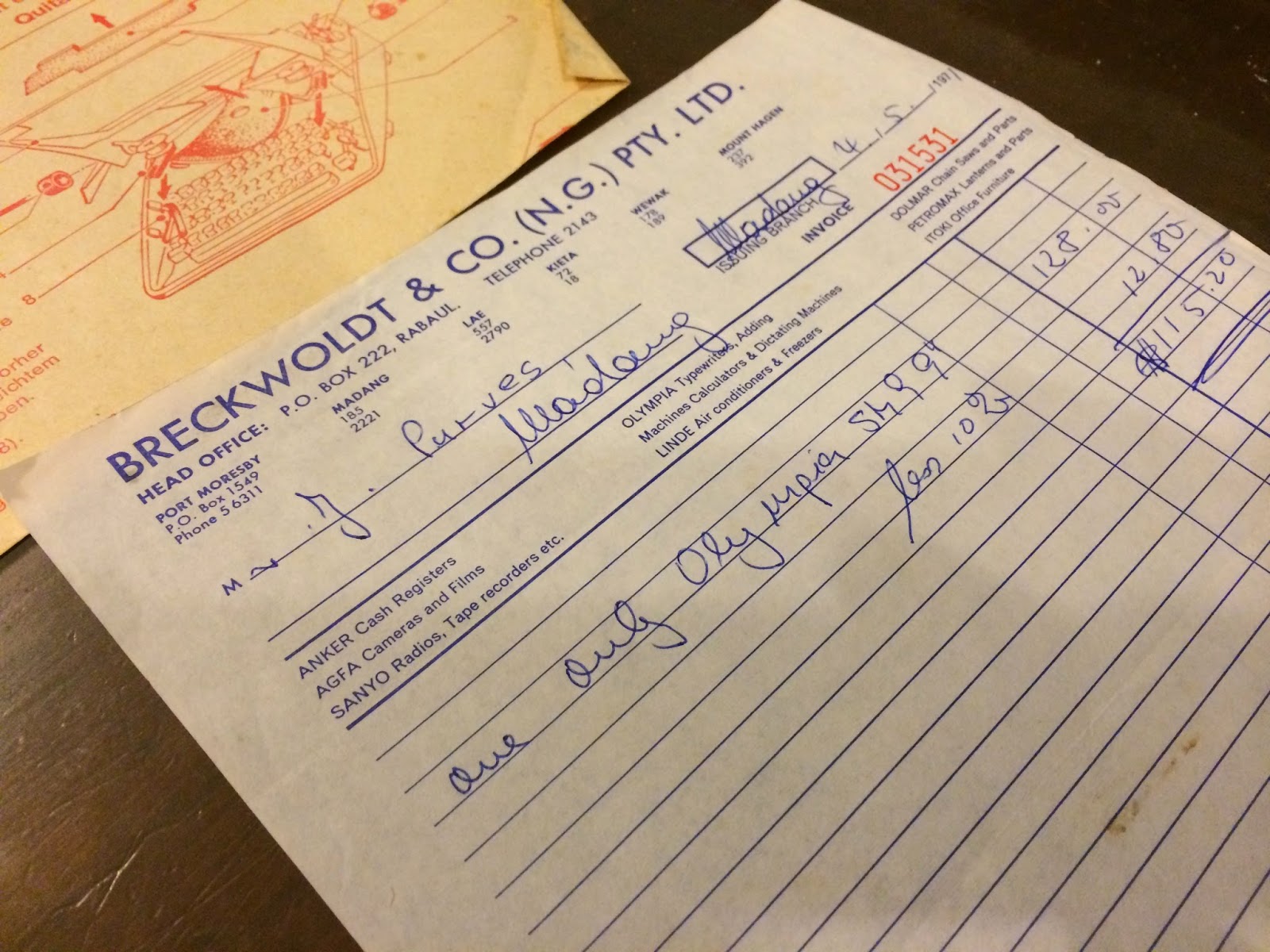 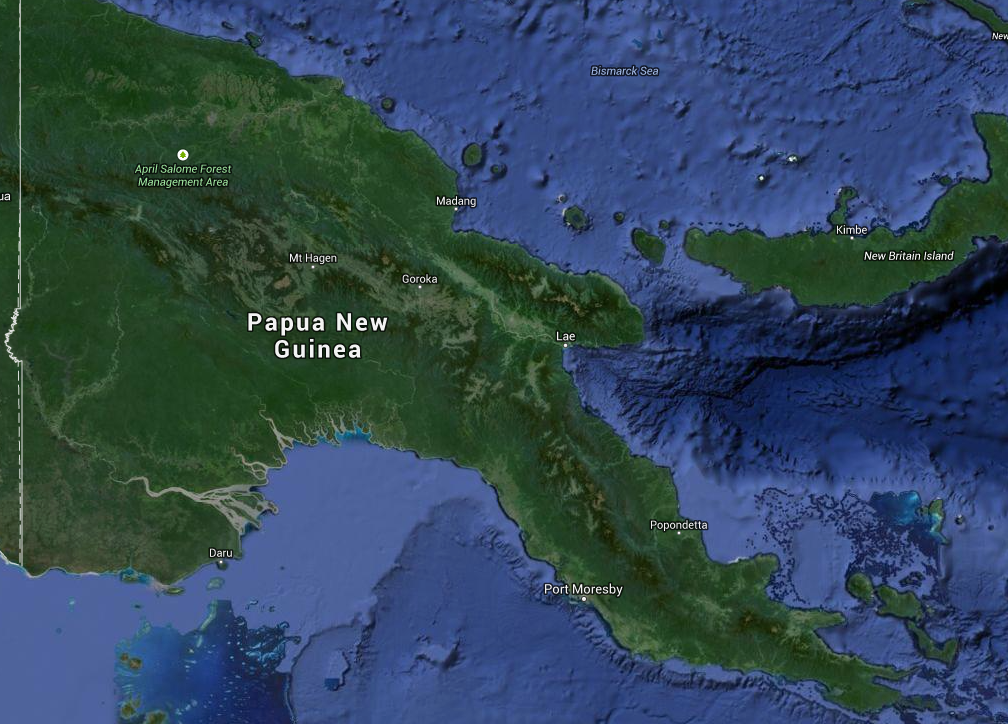 PNG was in a state of flux in 1971. It was a country that was coming back from being a major theatre of war during the second world war, and was forming its own government. Australia's own government assisted in the building of the nation, and we sent hundreds of bureaucrats to assist. Not only that, but hundreds of missionaries poured into the country to lay claim to the souls of thousands of tribal people that were still to have contact with the outside world.

And here we have a then brand-new Olympia SM9 being sold to someone out of a shop in a fairly remote town in PNG.

Speaking of PNG. Rob Messenger mentioned on his blog a couple of weeks ago a film that was going to be aired on Australian television called 'Parer's war'. I was rather eager to watch it, so I settled down with a cold drink and sat back and watched - with a bit of an eye out for typewriters that may pop up. Why not do a bit of typewriter spotting, you may say!

But some of the interior shots of Parer's home seemed oddly familiar. And towards the end of the film I got an unexpected shock. 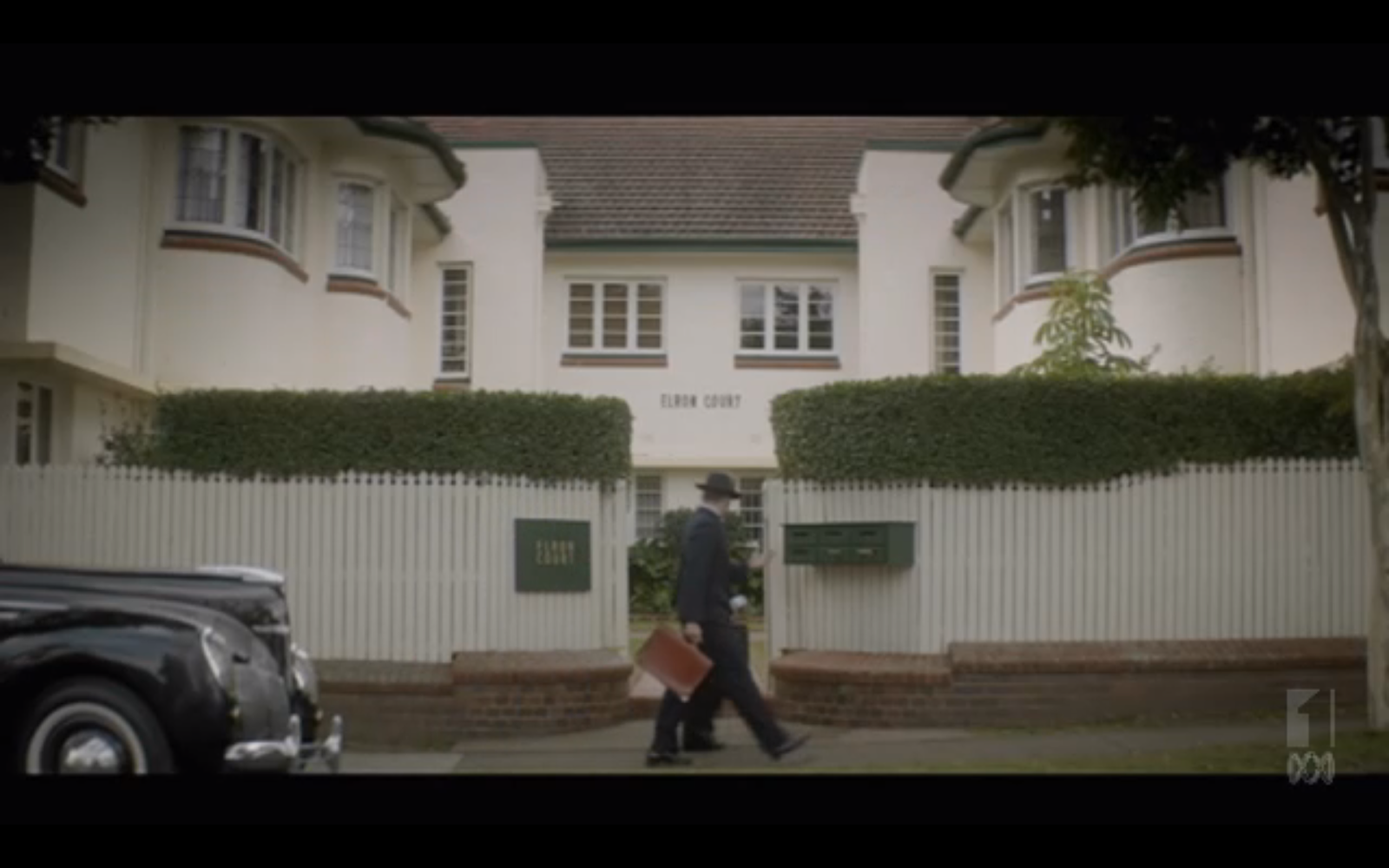 The outside of 'Parer's' block of flats (apartments).

Such a beautiful art deco building it is, right? 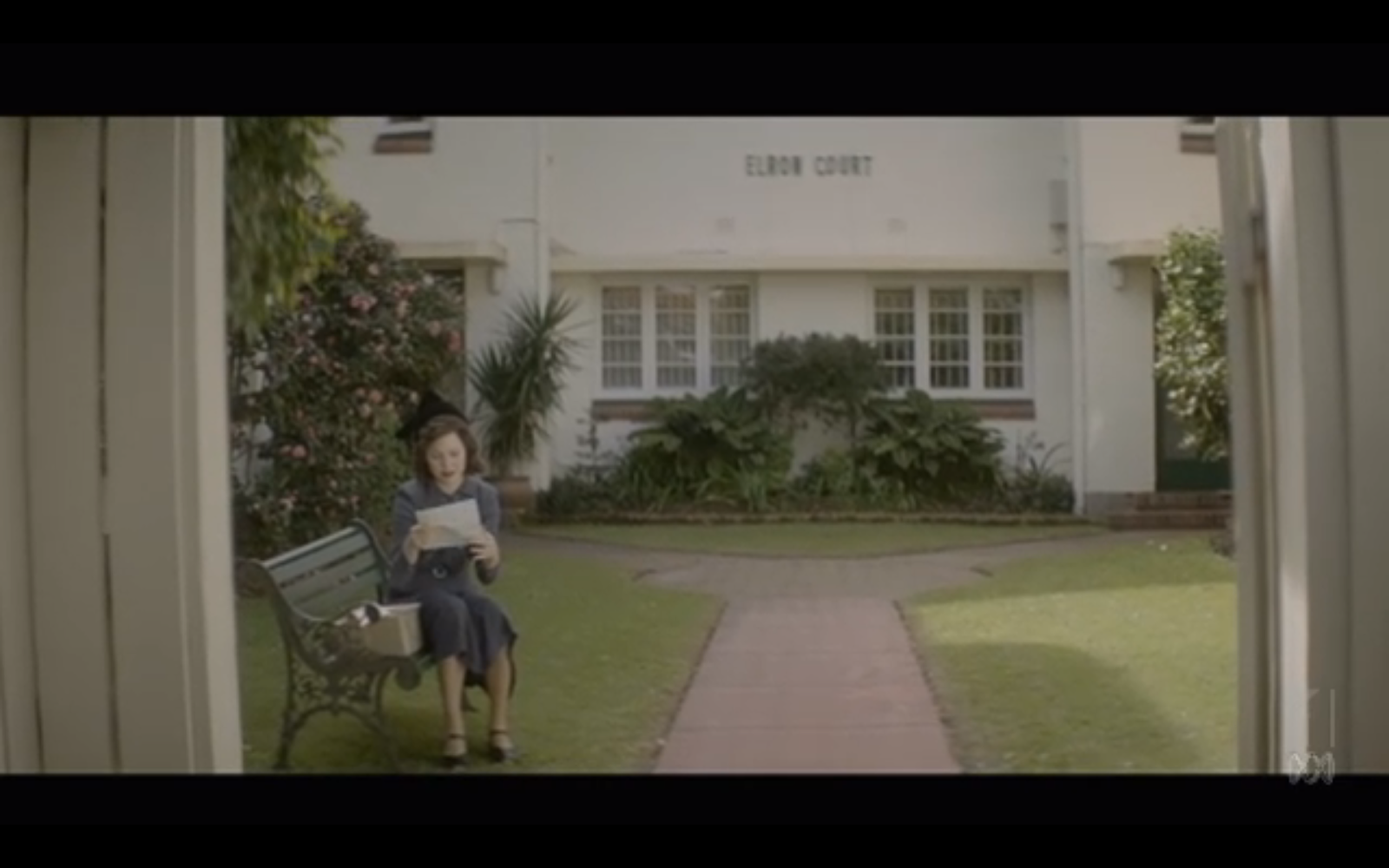 The courtyard in the front of the building.

That's also quite a beautiful court-yard. I wish I lived somewhere like that.

Oh wait.... I did. Actually, when I started writing this blog in 2012 I was still living there. Remember my blog entry on the cinema nights I used to run in that courtyard? 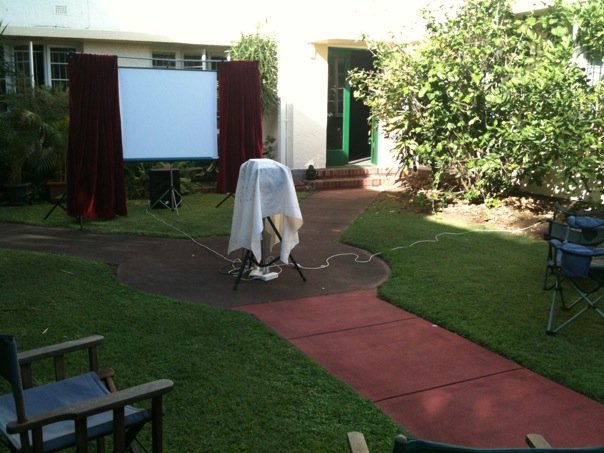 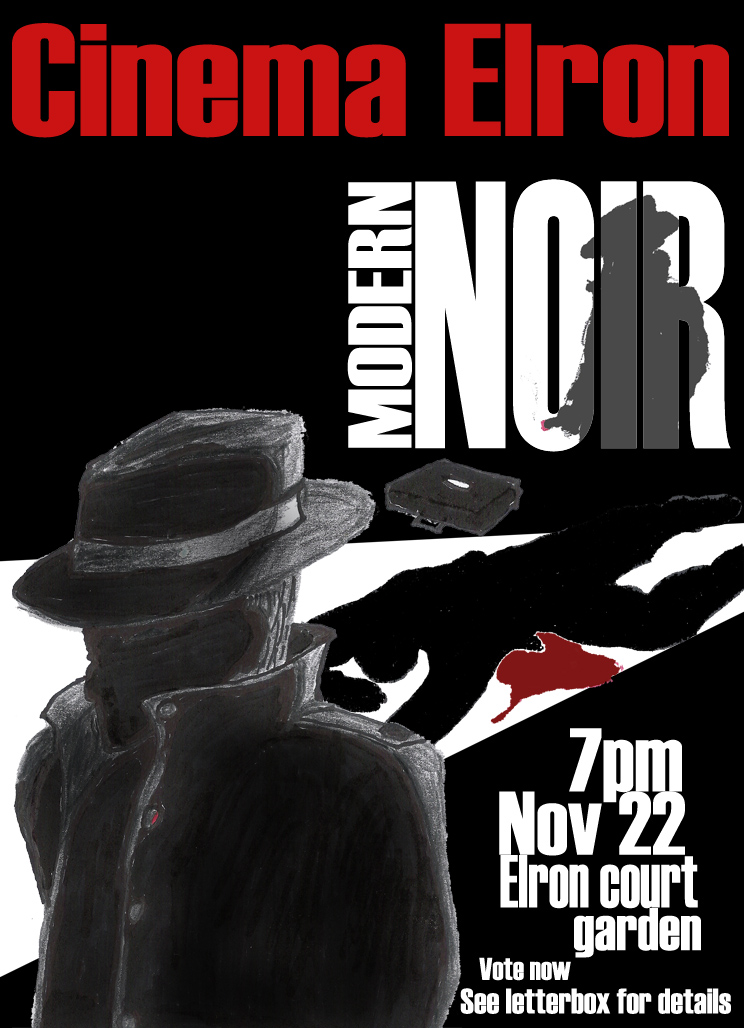 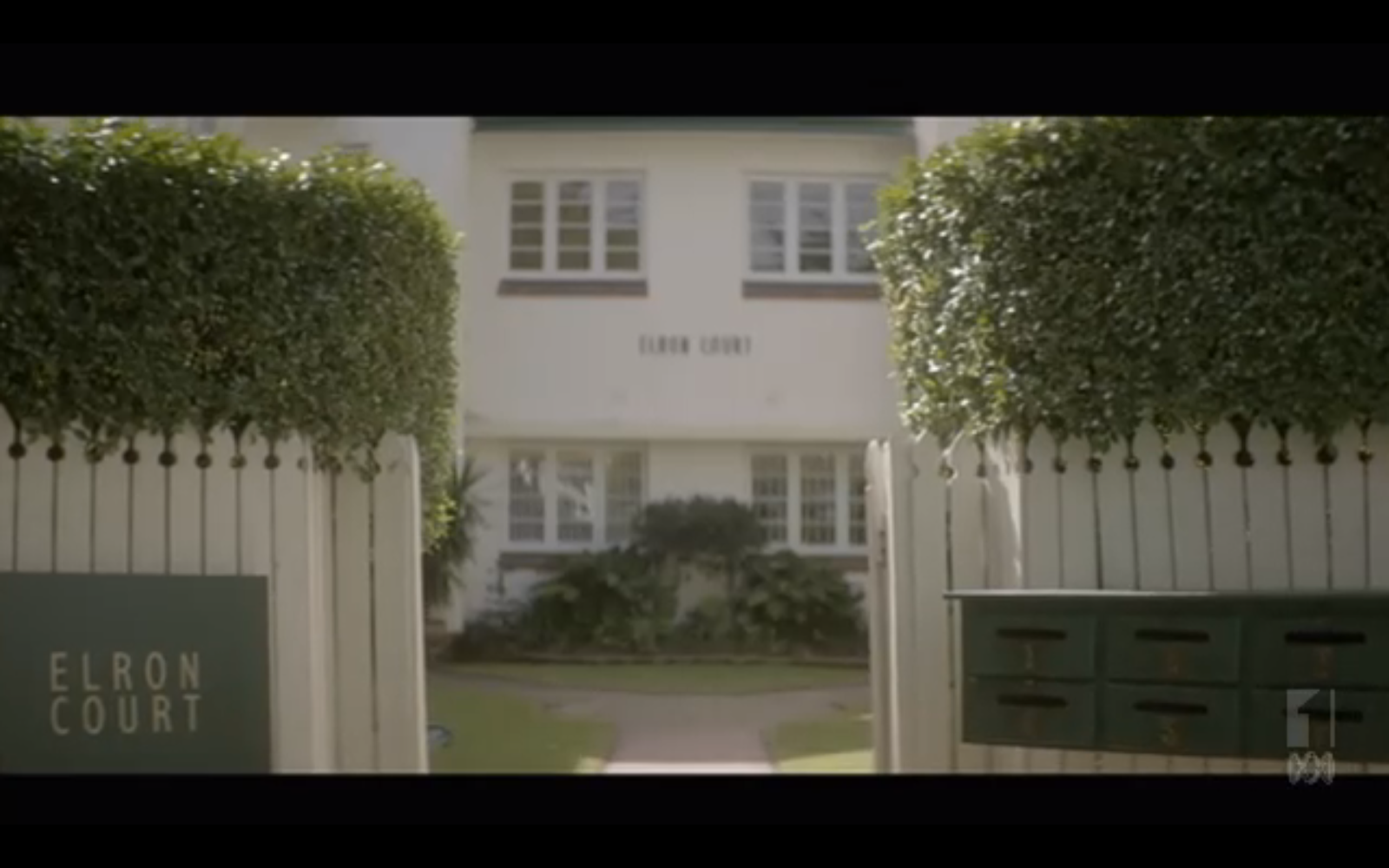 The interior shots weren't filmed in Jane and I's old flat, but rather the flat that was opposite us across the garden at Unit 1. 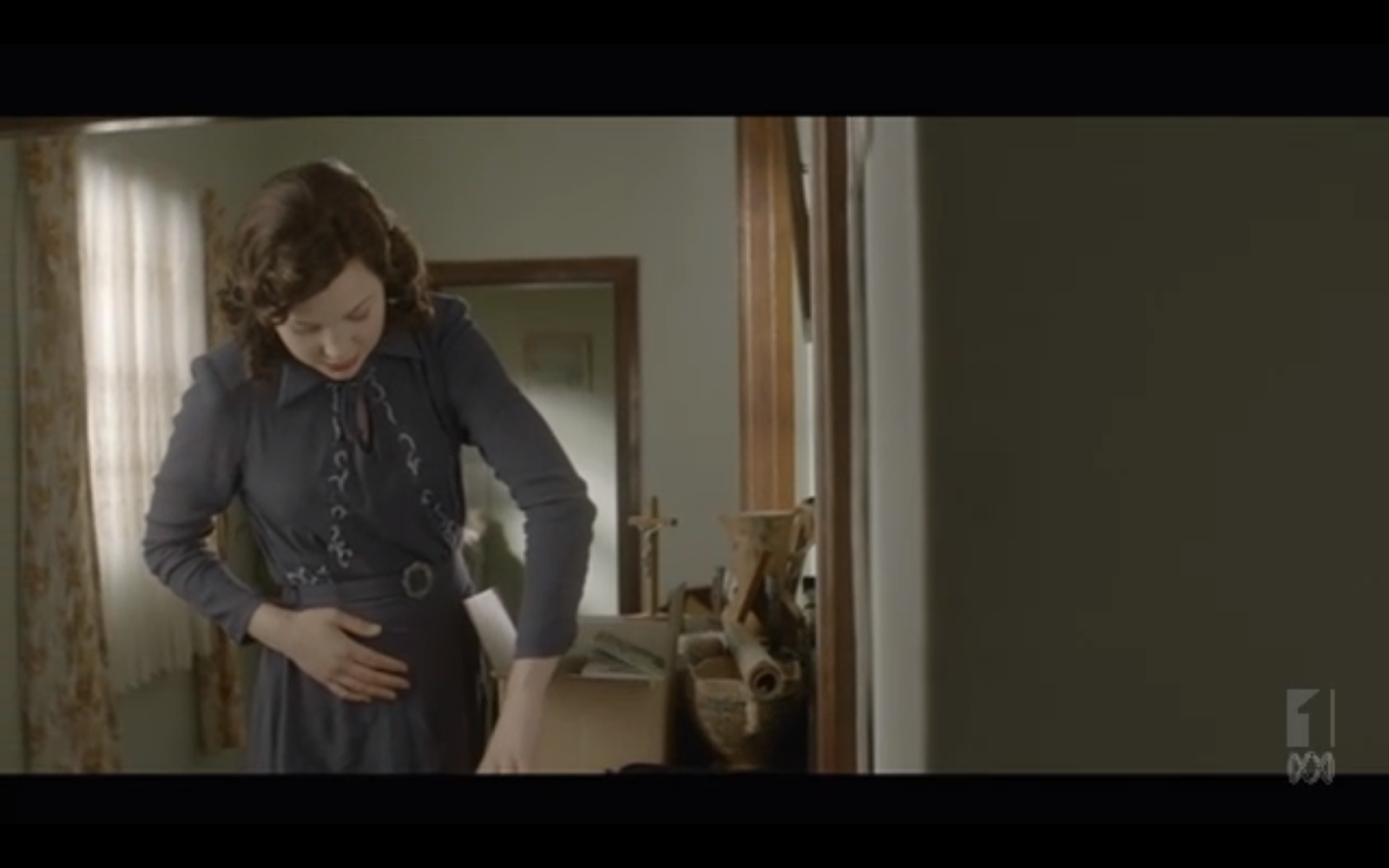 A good friend of mine used to live in that apartment, and I'd have to have spent hundreds of hours there drinking lovely wine and talking politics, religion and sex. All the stuff you don't talk about in polite company. 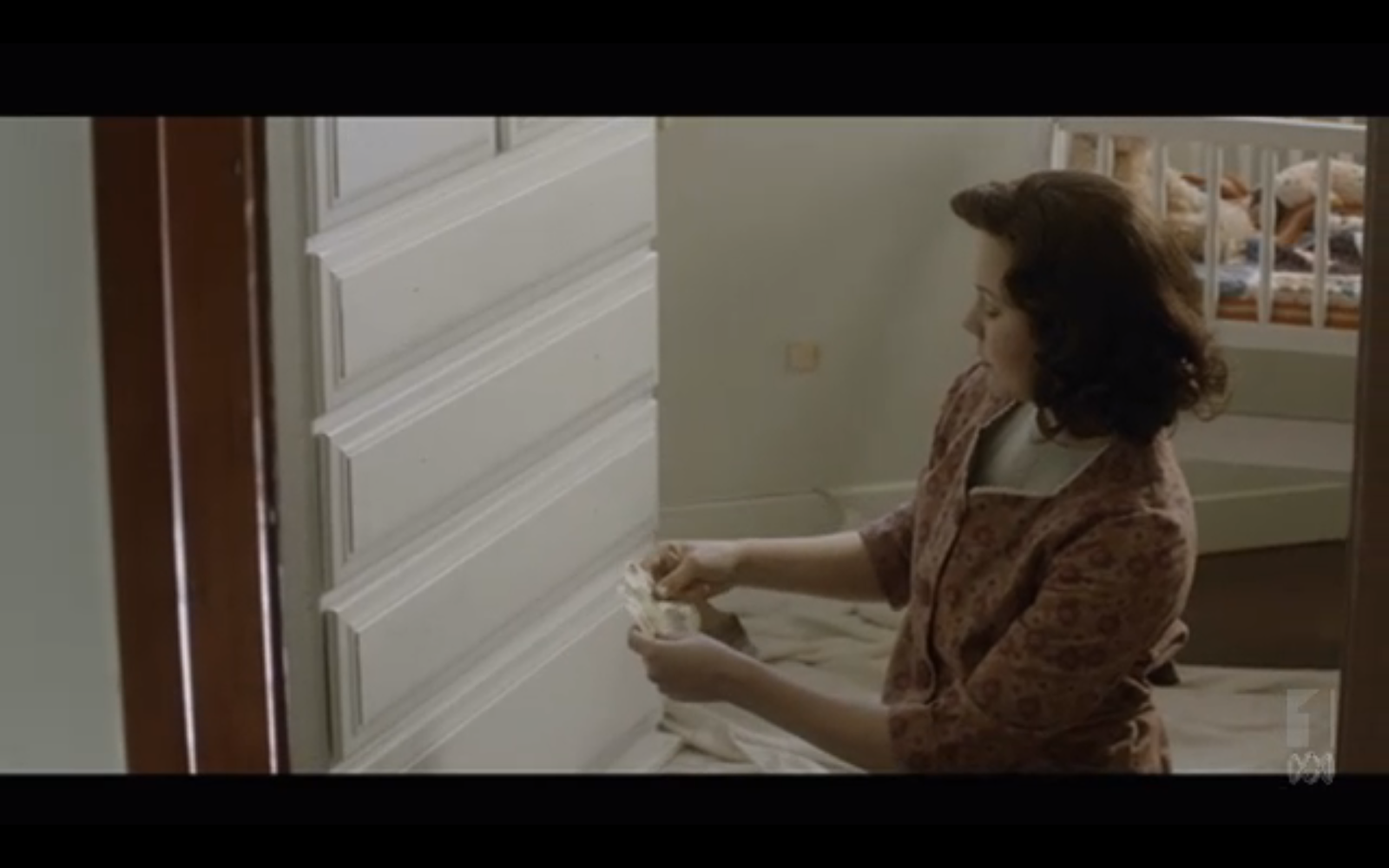 Heck, when she was away I would go over and feed her birds, which were kept in the room that in this scene is being done up for a baby's nursery. Even the phone jack on the wall where her computer used to be connected is visible in this scene.

I did a fair amount of research into the history of the building when I lived there for 5 years (Jane lived there 11). It was built in 1939, and opened for tenants in 1940. 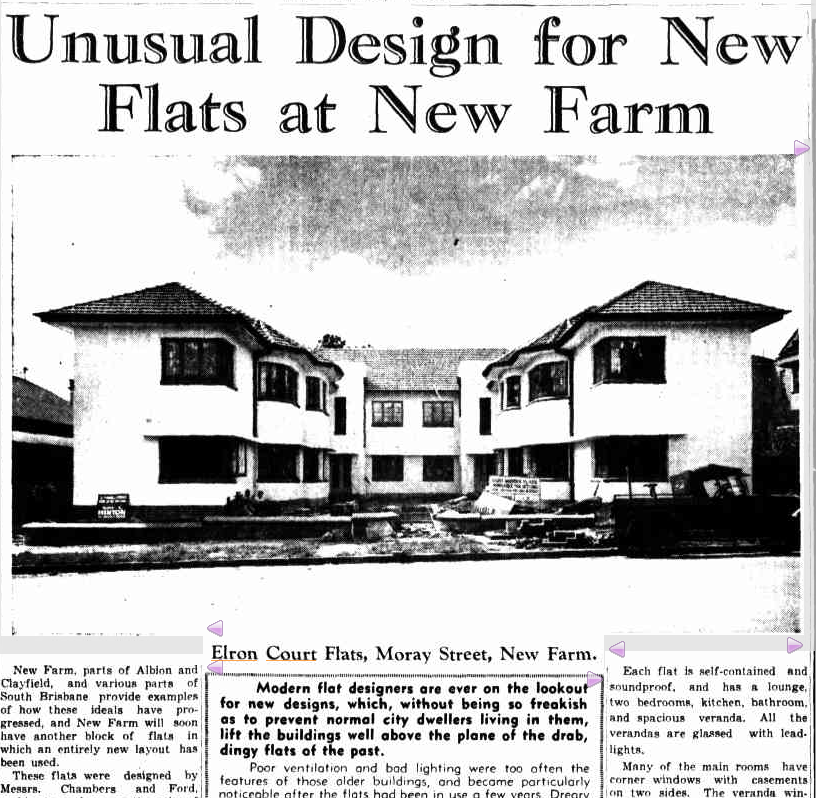 But I have no idea if Parer himself actually lived there at any stage. There are a lot of interesting stories to be told about that place, and it was nice to have added history of my own to it's tale.

Ahhhhh.... I'm getting all nostalgic again. I better get back to packing house, as I'm moving again very soon.