A hate letter to my Valentine. 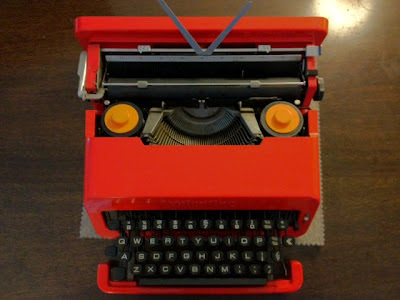 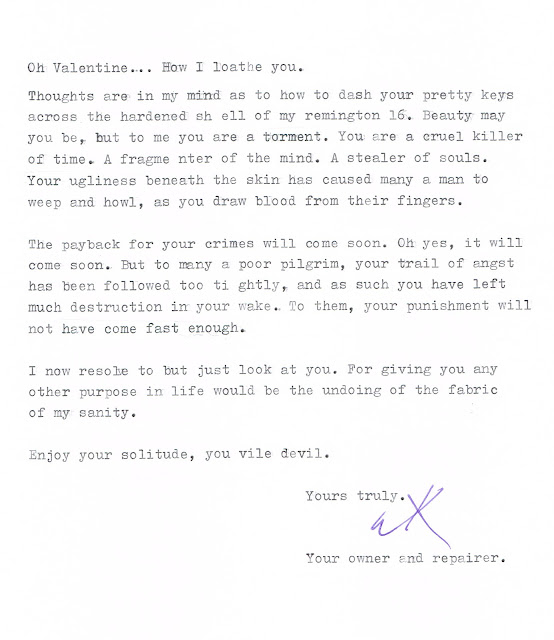 It seemed such a simple thing - putting the bearings back into a typewriter carriage. I saw Retro-tech Geneva's Valentine shooting bearings, and I felt pretty confident that this was a problem that I could manage.

And when I say manage, I mean... mange with a bit of effort. I wasn't expecting this to be a walk in the park.

The day after I read about the bearing shooting typer, I came across one on Ebay Australia that was doing the same thing. It had a few dings and issues, and no one else on Ebay wanted to go near the thing. So it was going pretty cheaply. The man who owned it had attempted to repair it too, but had only gotten as far as Retro-tech had. After the sale was completed, he asked me to keep him informed as to how my repairs went.

The Valentine doesn't suit my collection, but the style and design are just so - iconic - that I felt that it would be nice to have one there. If anything, just as a poser piece.

But that was the theory. In practice, I really don't like hanging onto a typewriter that I am not actually going to use. So, I set about repairing this typewriter. I had a heap of time on my hands today while I waited for my car to be serviced, so I thought I'd spend some quality time with this machine.

But I was too eager. I sat down and watched a movie last night, and found myself felling far from tired. I thought to myself 'Just make a start', and before long I had the Valentine partially disassembled on my desk.

The hours passed by quickly, and I soon found myself filling my glasses with perspiration. Nothing was working. Nothing seemed to work logically. By about 11pm I found myself very tired. My patience was failing, my sanity was slipping, and I knew I wouldn't achieve anything this evening.

I put out a plea to the portable typewriter forum for help. I was so tired that I asked for help with an Olivetti Lettera 32 (I'm not even sure I wrote the whole thing) instead of a Valentine.

I ended up laying in bed with my iPad. I read through Retro-tech's site and comments, and I came across a link to an older blog entry by another typosphere blogger on this subject. I clicked on the link and read through the bloggers suggestions (in his case, an actual lettera 32 was being used) but I just couldn't understand them. Nothing seemed to make sense as I was too tried.

I put the iPad down, and ran through some thoughts about the Valentine problem. But I was lucid, and I started to think about how much of a complete wast of time it was. My mind I crossed between waking and dreaming, and I soon found myself being teased by a young girl about how 'boring' this all was, and how I just apparently didn't know what fun was. She giggled, and played 'Girls just wanna have fun' on a record player in her pink bedroom.

I awoke a little later, but I couldn't accept at the time I had been dreaming. It didn't make sense, but it had to have come from somewhere, right?

I crawled this morning with a heck of a headache. I spilled my tea everywhere, and made a mess of just about everything. I took my car to the service centre, and then walked home. My head felt dull, and I just couldn't think. I decided I just didn't have the mental capacity to deal with the Valentine, so I busted open my coin box and counted it.

After I while I re-read the blog site. I could picture what they were saying in my head, but I wasn't sure it would work. But I gave it a try. I slipped one side of the bearing retainer into the carriage without a problem, and then tried putting the other in. The site suggested that I 'shimmy' the second side in.

I tried and I tried. And nothing seemed to work. After about 30 minutes of trying to 'shimmy' I more or less gave up.

As I lowered the carriage gently back into its bed something happened. The retainer slipped... every so slightly. It slid between the rails, and past where it had previously been blocked.

I stopped and drew a breath. This was progress... REAL progress. It may only be about a millimetre, but it showed it could get in there. The bloggers suggestions really could work!

And work they did. Before long I had slid the entire retainer tightly in between the rails, popped a couple of bearings in as instructed, and began to slide the carriage. Things were looking good!

Not a problem. The rear retainer was about a mm out of line with the front retainer, and this caused it to poke just a tiny bit out the side. I shimmied it back a bit, and it all lined up nicely. *Note to anyone else attempting this. You have to be dead accurate with your positioning*.

I bolted everything back together, let out a deep breath, and just looked at my handiwork. I had done it. I had reassembled the Valentine. I had a Valentine that worked! Now, it was time for a ribbon.

After the fight with the carriage, what came next just felt like a cruel joke. Slotting the ribbon into the Valentine is anything but graceful. It wasn't enough that lining up the ribbon into the unit was far more awkward than seemed logically possible, but the spool caps refused to screw on. This turned out to be largely the fault of the spools I had been using. But not entirely their fault. I quickly swapped over to another ribbon I had that had universal spools with a lot of clearance around the centre hole opening.

The caps screwed on, but I still needed to hold down the spool with some pressure to stop the centre shaft from spinning while I tightened the caps. The whole thing was clearly designed to allow for maximum use of space available, instead of considering the needs of the poor typist that would be using this machine.

I cleared off the ink I had smeared all over the typewriter and fed some paper in. The repair was done, and with all the frustration and anger that I still had coursing in my veins from the repair, I tapped out the above letter to my Valentine typewriter. It was the first time I ever typed on a Valentine, and I have to say, I'm far from impressed. But at least that... was something that I expected.

It even skipped the escapement while I tried to type 'fragmenter', driving home how much effort I put into something that really wasn't worth the time.

And to you, Mr Typebarhead.... Your instructions saved the day. They need a but of tweaking, but for the most part your directions are excellent. If you ever are in Brisbane, sir... I owe you a beer.
Posted by Scott K at 20:44