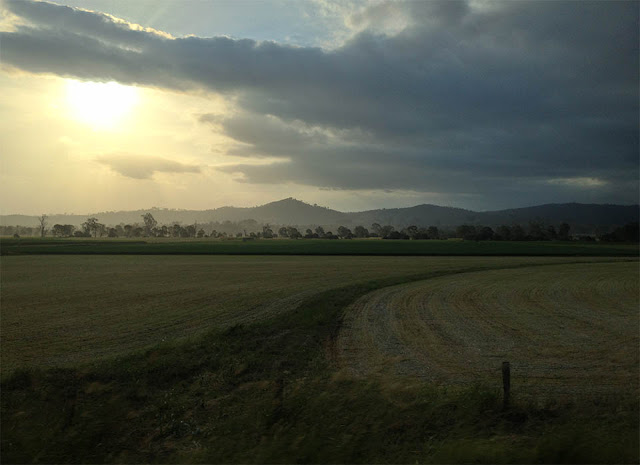 I'd been driving for about an hour and a half. Just after I left my home I'd checked the outside temperature and discovered it was 30 Degrees C. (86F). But now, as I was passing Through the town of Beaudesert, it was reading 39C (102.2F). 15 minutes later when I was nearing my destination, it was reading at 41C (105.8F).

The Air conditioning in the Nissan was blasting on 'leaf-blower' mode, which was keeping the cabin reasonably cool. But the brown smoke haze from some near-by bushfire was a constant reminder that outside of the car, things were pretty damn hot.

This was old farm land we were passing through. Beaudesert is unmistakably a rural town, with many of the ubiquitous country 'Elders' business signs posted around the place, and lots of dealerships of farm machinery and associated farming products ling the highways. At the center of the city is a beautiful Art Deco pub, which I had helped install Air Conditioning into about 4 years ago.

There were some farms that looked green and productive. But largely the landscape appeared dry and and worn. I turned off the Mt Lindesay Highway about 10 minutes down the road from Beaudesert, and found myself on a battered and pitted piece of bitumen. Several sections of this road were brand-new and smooth, and were obviously sections that had been replaced after the originals were washed away or heavily damaged during the heavy flooding that covered Queensland two years ago.

I was on my way to meet a chap named John. He has moved up from Melbourne several months ago, and had tracked me down via this very blog. He had been Typewriter Mechanic once and has worked for some rather prominent names. Olympia, Olivetti, Remington. He has shared tales about his time at agencies like Chartres and McDougalls - names associated with some major trade in typewriters in Melbourne, and Australia.

John found me out online while looking for like minded typewriter eccentrics here in Brisbane. When I saw in his email that he was from Melbourne, been in that city for some time as a mechanic, who had also had run several typewriter businesses of his own - I realised that there we were likely to have a deal in common, more than just typewriters. He didn't know it when he first emailed, but not only was I from Melbourne, there was a pretty good chance the he'd worked with, and known my grandfather.

So while chatting to John on the phone, I segued into telling him. "Scottie Connell"! John exclaimed while searching his memory about him. Like all memories, people from the past don't always come to mind quickly, but he remembered the name - and it rolled off his tongue with genuine familiarity.

I was now on my way to meet John and check out his collection. John told me that he'd acquired something like 400 or so machines. Unfortunately in the move to Queensland just recently, many of them had been damaged in transit when the shipping container that stored them had been dropped.

John, it turned out was a very friendly and energetic man. If it wasn't for the inevitable effects of age I'm certain he'd probably have stood the same height as me. But one thing that hadn't aged were his typewriter mechanic forearms. He had the kind of muscle that the teenagers these days seem to spend hundreds of hours in the gym trying to build up. I'd dare say that John was also far more charming than most of these teenage 'juicer' gym junkies too, and would probably have far more success 'pulling the chicks'.

I looked around for tins of Spinach he may have had hiding in his pockets.

John also has a very lovely wife by the name of Margaret, who was a delight to talk to. I'd brought Ms Jane along with me, as she loved these country drives - even if she had absolutely no interest in the old typewriters. 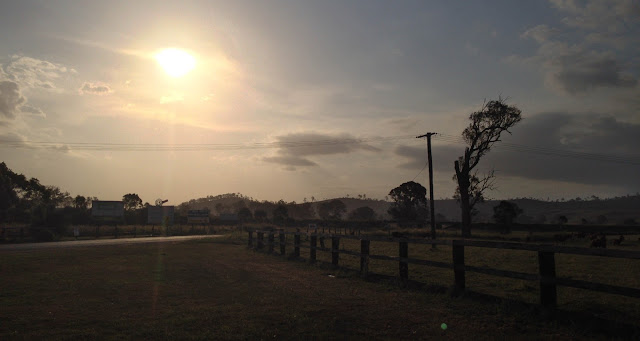 John had quite comfortably moved into his beautiful country home, and had set up a great workshop down stairs. Upstairs, the house was nice and cool from the Air-conditioning while downstairs the workshop quickly rose towards 45C (113F), and may be further, after we turned the lights on and started to excitedly pull machines out of the shelves to look at and compare notes.

John also had a surprise for me sitting on his workstation. But I'll tell you more about that in a moment.

In the workshop there was the obligatory workbench (which reminded me that I need a decent one of myself) and a typewriter workstation that was made for making working on his machines easy. It looked like a typing desk with a floating desktop that could be adjusted in height - I think, and it had a padded 'lazy Susan' - a swiveling table that allowed John to spin the machine around quickly.

The shelves were filled with machines that were largely in their cases still. Some of the standards were covered in foam, fabric, cardboard and tape to protect them. Other machines rested where they lay - all as long as they were out of the way.

I couldn't count them. There were everywhere, and stacked two deep on the shelves. I thought to myself, that it might not be a bad idea to get in with my DSLR and photograph and catalog these machines properly. If John was interested, that was.

It would be worth it, as just looking around the room I could see many familiar cases that belonged to quality brands and makes. Most of them were machines between the 30's and 60's. But there were some astonishingly beautiful older machines.

One of the first machines that grabbed my eye was a very ornate and intricate machine that had a name that obviously preempted my writing style by about 100 years. I grabbed my iPhone out and just took a few cursory photos. 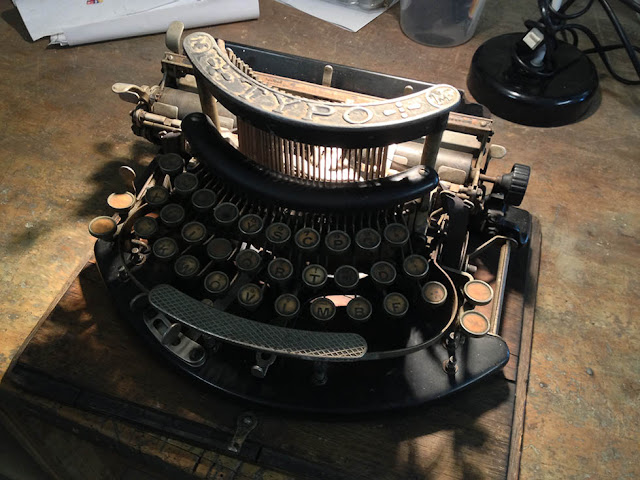 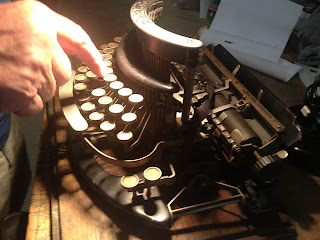 The machine was, of course, a 'Typo'. It was a gorgeous down-strike machine with an interesting key lay out, along with many french characters. 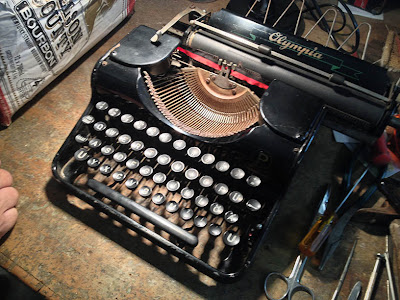 This photo does no justice to this pre-war Olympia. It was a great machine with German characters.
While it looks SM1, the big 'P' on the front makes me wonder what model it actually is. 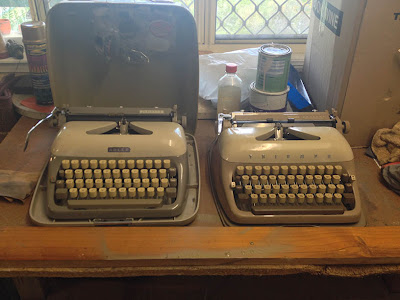 Adler and Triumph machines! These were truly subtle yet stylish typewriters. 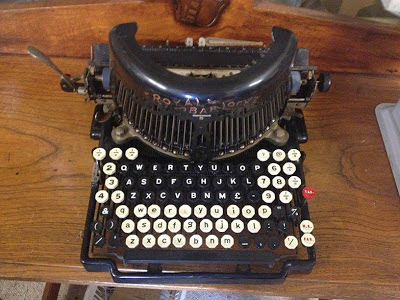 As we hunted and pecked through these machines, there were a couple of coloured cases that really stood out. Eagerly I asked John if I could get them down and have a look. One particular burgundy case really lit Johns eyes up, and he had an excited smile.

When we got the case down, we opened it up on a bookshelf and John exclaimed with pride "Look at that"! 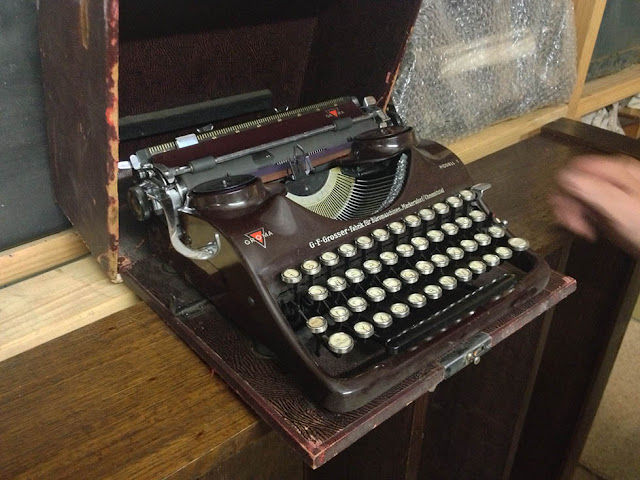 While the case was looking a bit battered and traveled, the machine inside was in astonishingly near original condition. There was a bit of dust on the machine, but I could tell that all it needed was a bit of a cloth wiped over it, and its 'to-die-for' looks would shine through.

I'd never seen a machine like it. Again, the photo doesn't do this machine justice. It was simply beautiful. The glass keys were clear, shiny and the kind of thing that keychoppers would go crazy for. The deep colour was just damn sexy - as were the curves of the shell.

Not long afterwards I grabbed down another familiarly red toned machine. 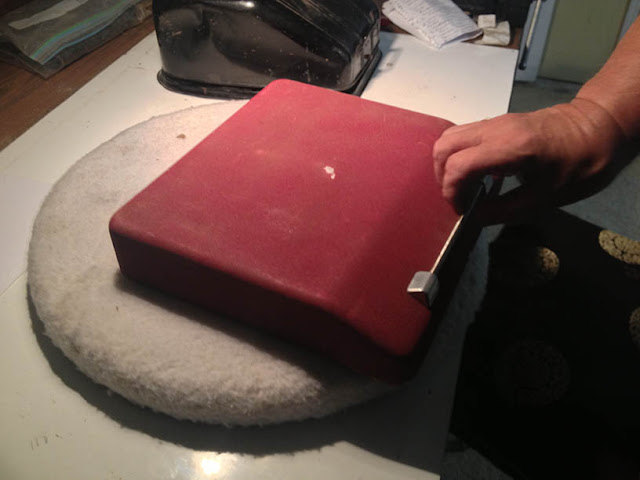 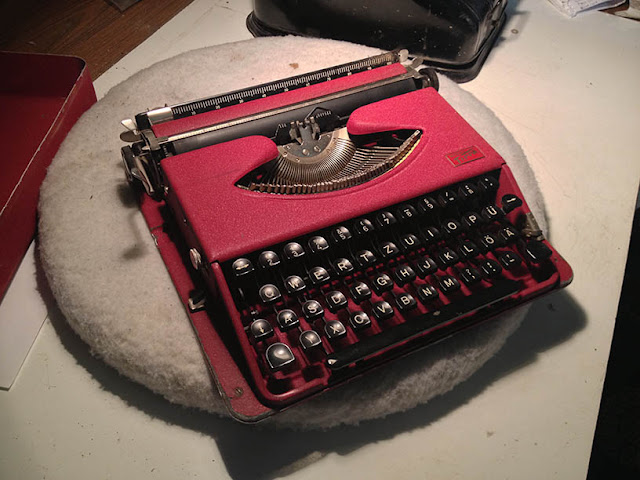 Now THAT is one seriously, seriously sexy Gossen Tippa. Hang on... what's that behind it?

It was now very hot. We started to make our way back up stairs, when we stopped and had a look at a couple more machines. One of these machines unfortunately wore the battle-scars of the big move up from Melbourne. It was a Mingnon machine that was in perfect condition. The machine just gleemed in the light coming through the window, and the metal didn't show anything of the pitted corrosion that often eats older machines ever so slowly.

The case itself was perfect. Sort of. The top of the case unfortunately wore the scars of another typewriter punching down onto it with its feet. 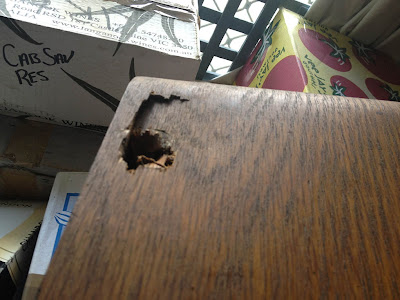 Beaten, but not out - the damaged Mingnon case.

There were two almost identical holes that had been crunched into the top of the plywood laminate, and it breaks your heart to see the damage. I can only guess how John felt about it - probably something alike how I felt when I dropped a 100+ year old wax cylinder recording onto a wooden floor some time back, shattering it into a powder.

I could see that John was upset about it, and I really didn't have any solid suggestions as to how even a modest repair could be achieved. We put the machine away and went back upstairs, and out of the sweltering heat.

John and I chatted for a while about a variety of machines, and exchanged stories. I had brought my blue Royal P for him to see, and also my dogged SG1 - which has to this date proven to be quite a challenge for me to repair. He gave me some good suggestions on repairing it, and I've got some work ahead of me yet.

The weather outside started to change, and the temperature began to drop. The sun was now heading down behind the mountains, and the clouds that had now gathered overhead looked as though they potentially would dump their rain on us at any second.

They didn't, but we headed home just the same. Ms Jane and I stopped in Jimboomba to get a bite to eat on the way, and as we walked into a famous resturant mega-chain, it was obvious we were back in the suburbs again. I walked past a couple of Juicers with big arms talking out front, and got a snippet of their blokey conversation. "It increased power by like 10%, cost about $30,000".

I thought to myself about how nice it is to have a conversation with mechanics, that didn't involve conversations of 'increasing power'. And I also realized that - really, typewriters are not only a more interesting hobby than just playing with the engine of a Commodore. And much cheaper.

I had come home with one my typewriter than I left with, and excitedly I dropped it onto my desk. If you recall, back when I visited Canberra, I was quite taken by Robert's Bing No.2. 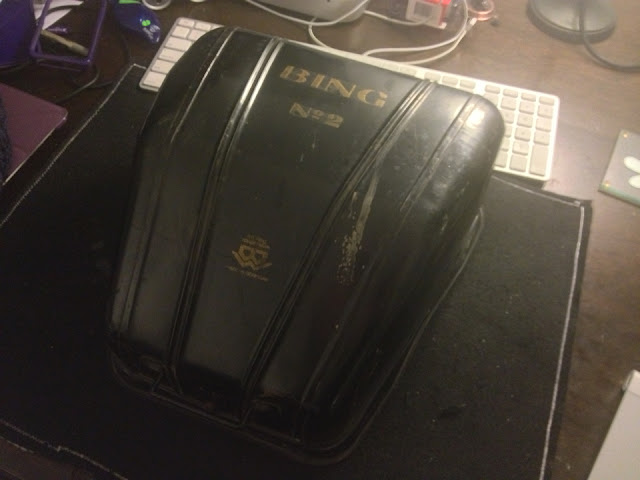 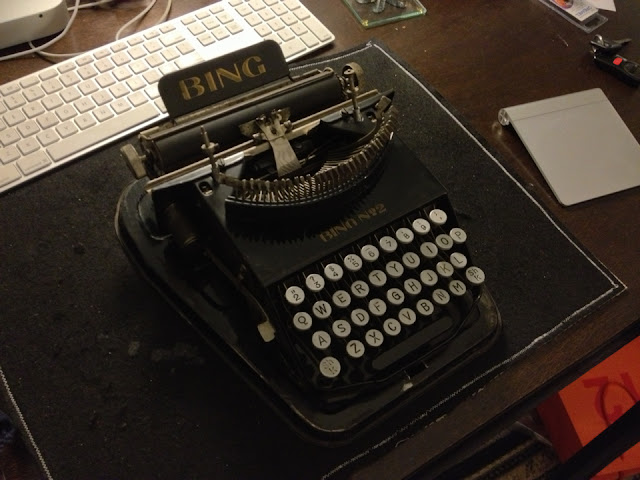 John handed me this beautiful Bing machine. There's a catch though - it needs some challenging repair. The most significant issue is that the machine is missing its bearings. Currently the carriage is floating about mostly loose, and the bearings seem to be somewhere - over the rainbow.

But seriously, I was stunned. And very thankful to John for this, and for letting me inspect - what was probably about, oh.... 5% of his collection. I'm looking forward to catching up with John again in the future. Typewriter people! They're great.